Posted on September 4, 2021 by ifnm| Comments Off on Pennsylvania professor teaches White people committing suicide can be an ‘ethical’ act

A professor employed at a Catholic university in Pennsylvania said on camera that there are merits to the claim that it’s ethical for White people to commit suicide.

“White people should commit suicide as an ethical act,” said a quote in a slide for a presentation hosted by Duquesne University psychology professor Derek Hook.

In the lecture, which was presented to Baltimore-based American Association for Psychoanalysis in Clinical Social Work in June, Hook quoted a South African philosophy professor, Terblanche Delport, who has written about White people committing suicide in South Africa, before further discussing the comments and arguing “there was something ethical in Delport’s statements.”

Posted on February 26, 2021 by ifnm| Comments Off on Former USA Gymnastics Coach Kills Himself After Being Charged with Human Trafficking, Sexual Assault

State officials confirmed the news to WLNS CBS that the coach died from a self-inflicted gunshot wound. He was 63 years old.

Comments Off on Former USA Gymnastics Coach Kills Himself After Being Charged with Human Trafficking, Sexual Assault

Posted on December 29, 2019 by ifnm| Comments Off on Inappropriate, suicide-themed joke at Democratic Party event (Video)

The Chairman of the Leeds Democratic Committee said in the secretly recorded video: “Today I saw a thing and it said a lot of men…a lot of white men were committing suicide, and I almost thought, ‘Yeah, great,’ Then I thought about it little more and I thought maybe I shouldn’t say that out in public.” He received laughter from some crowd members.

A 40-second video has been circulating around the web, showing a guest at a Maine Democratic Party event allegedly mocking increasing suicide rates.

The video was released by an anonymous source on an online blog.

Several viewers and organizations have reached out to NEWS CENTER, asking about the video.

NEWS CENTER’s Kristina Rex set out to verify whether it’s real, and the context behind the viral video.

It was during that period that, at the Sundance Film Festival, McGowan had a sexual episode with Weinstein that she later claimed had been a case of rape, the family statement said. Messick allegedly reported the sexual episode to her managers and insisted they address it.

Hollywood studio executive and producer Jill Messick, who suffered from bipolar disorder, committed suicide this week, her family reported, citing Harvey Weinstein and one of his alleged victims, Rose McGowan, as contributing factors in the tragedy. Messick was 50.

Messick, who was married and had two children, killed herself in Los Angeles Wednesday. The method she used was not reported.

A family statement revealed that “five years ago, Jill suffered a manic episode. Anyone familiar with bipolar disorder knows that it is a cruel and vicious disease. With the help of doctors, her family and friends, Jill rebounded. Jill had fought to put her life back together. After a long job search, she was in negotiations to run the production division for a new entertainment company.”

The family said that for Messick, depression “had been her nemesis for years.” The statement also took aim at Weinstein and McGowan, saying Messick had become “collateral damage” in the movement that emerged after allegations of sexual misconduct by Weinstein were reported.

“The Movement” just lost one of its own, began the family statement.

Posted on November 25, 2016 by ifnm| Comments Off on Researchers have found a troubling new cause of death for middle-aged white Americans

The researchers, Justin Pierce and Peter Schott, found evidence that trade with China has resulted in greater rates of suicide and poisonings (including fatal drug overdoses) after 2000, when President Clinton and Republican lawmakers allowed a major increase in imports. White Americans without a college degree are becoming more likely to die in middle age, reversing decades of progress toward better health.

Researchers first noticed this worrisome trend last year. They pointed to increases in opioid abuse, obesity and suicide among the causes of death, but what caused these increases has remained something of a mystery.

This week, a pair of economists have advanced a new theory. They suggest that, for many workers, a major shift in the structure of the U.S. economy may have been fatal.

The researchers, Justin Pierce and Peter Schott, found evidence that trade with China has resulted in greater rates of suicide and poisonings (including fatal drug overdoses) after 2000, when President Clinton and Republican lawmakers allowed a major increase in imports.

Pierce and Schott suggest that as competition with Chinese manufacturing forced U.S. factories to close, many of the Americans who were laid off never got their lives back together. Instead, they fell into depression or addiction. White adults, in particular, suffered from the change in policy.

Posted on February 10, 2016 by ifnm| Comments Off on Black Lives Matter Activist Shoots, Kills Self on Steps of Ohio Statehouse

“Let the record show that I pissed on the state house before I left.” Black Lives Matter activist MarShawn McCarrel shot himself Monday on the steps of the Ohio Statehouse, the Columbus Dispatch reports.

Lt. Craig Cvetan of the State Highway Patrol pronounced McCarrel dead on the scene and said there were no witnesses to the shooting.

McCarrel was active and public about his support for the Black Lives Matter movement. He tweeted about attending a MLK Day rally just weeks before committing suicide:

Let the record show that I pissed on the state house before i left.

“We don’t have any evidence to know the reason why he did it,” Cvetan told reporters.

Comments Off on Black Lives Matter Activist Shoots, Kills Self on Steps of Ohio Statehouse The 30-year-old industry makeup artist died in close proximity to three drugs that were prescribed to Carrey under an alias, according to TMZ, which also reports it is still unclear which drug(s) killed her.

White was in possession of the sleep aid Ambien, the painkiller Percocet, and the blood pressure drug Propranolol.

White also left behind a suicide note, which police have confirmed referenced her breakup with Carrey.

A photo shared on Instagram by White seven weeks ago shows her taking an intravenous drip of what she identifies as Vitamins B and C, as well as the naturally-occurring antioxidant glutathione, The Daily Mail reports.

It’s society, not biology, that is making men more suicidal

Posted on April 15, 2015 by ifnm| Comments Off on It’s society, not biology, that is making men more suicidal

Around thirteen men in the UK will kill themselves today, and the male suicide rate is at a 14-year high. Is it time to accept that society has become dangerously hostile to men, asks Mike Snelle.

“‘It’s all in your head’ has the same appeal as ‘It’s all in the genes’”, wrote Louis Menand in the New Yorker a few years ago. “An explanation for the way things are that does not threaten the way things are. Why should someone feel unhappy or engage in anti-social behaviour when that person is living in the freest and most prosperous nation on earth? It can’t be the system! There must be a flaw in the wiring somewhere.”

I’ve had cause to question my own wiring. Two years ago, I hit crisis point. I stopped answering my phone. I wasn’t eating. I became suicidal. I was diagnosed as Bipolar and prescribed a mixture of mood stabilisers and anti-psychotic medication. Reading around the subject, I realised I wasn’t alone. Last week it became clear that more and more men were struggling just as much.

The suicide rate amongst men is at its highest since 2001, and is over three times that of women. The use of anti-depressants has increased fivefold since 1991. Today, around 13 men in the UK will kill themselves (4,858 men killed themselves in 2013, according to the latest figures). Why are men in our society reaching crisis point? What’s going on?

When I was diagnosed, I was told Bipolar is a genetic illness with a biological cause. I harboured the common misconception that ‘genetic’ means inevitable and unchangeable, but after some research I realised that’s not really what ‘genetic’ means.

Comments Off on It’s society, not biology, that is making men more suicidal

Posted on April 4, 2015 by ifnm| Comments Off on Ted Nugent Thinks Obama Is Causing Veterans to Commit Suicide (Video) 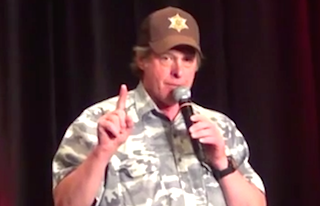 A widely-cited and frequently questioned statistic states that 22 military veterans commit suicide every day in the United States. And Ted Nugent knows why they do it.

Speaking at the Lincoln Day Dinner of the Republican Party of Maricopa County, Arizona this past week, the conservative rocker shared this charming message with the crowd in attendance.

Another American sniper fallen in his prime by Chuck Norris

Posted on February 16, 2015 by ifnm| Comments Off on Another American sniper fallen in his prime by Chuck Norris

Chuck Norris pays tribute to Marine who suffered after serving his country. Stars and Stripes reported in 2014 that roughly 22 veterans take their own life every day. That is a catastrophic tragedy by anyone’s estimation, especially considering that these precious souls once put their lives on the line for all of us. But alas, Washington is finally doing something to prevent America’s best from taking such acts of desperation.

According to the Washington Post, Marine Cpl. Clay Hunt survived a wrist wound from an enemy sniper in Iraq in 2007. After recovering, Hunt went to sniper school and then deployed with 2nd Battalion, 7th Marine Regiment, to Afghanistan in 2008. He fought during the Afghanistan surge and saw many of his fellow marines and other Navy corpsman pay the ultimate price.

After leaving the Marine Corps, he battled deep post-traumatic stress and panic attacks. Nevertheless, he continued to serve as an advocate for other veteran and humanitarian causes in such places as Haiti in 2009 after the devastating earthquake.