Posted on August 5, 2017 by ifnm| Comments Off on Robert Davi Shares Proof of Hollywood’s Bias Against Conservatives

Many celebrities enjoy using their platform of fame and stardom to lecture the public about social and political issues — and by and large, the media praise them for those opinions.

That’s as long as the viewpoints match the same liberal perspectives of those doing the praising.

The script is flipped for conservatives in Hollywood. Being outspoken about right-of-center issues is a risky proposition that can seriously impact a person’s career. Consider briefly the names of some avowed conservative performers: Clint Eastwood, Bruce Willis, James Woods, Jon Voight and Gary Sinise. There are others, of course, but these are players with long-established careers who, once entrenched, found enough security to occasionally put out their opinions.

How did ancient Rome deal with FAKE NEWS? Let us learn together… 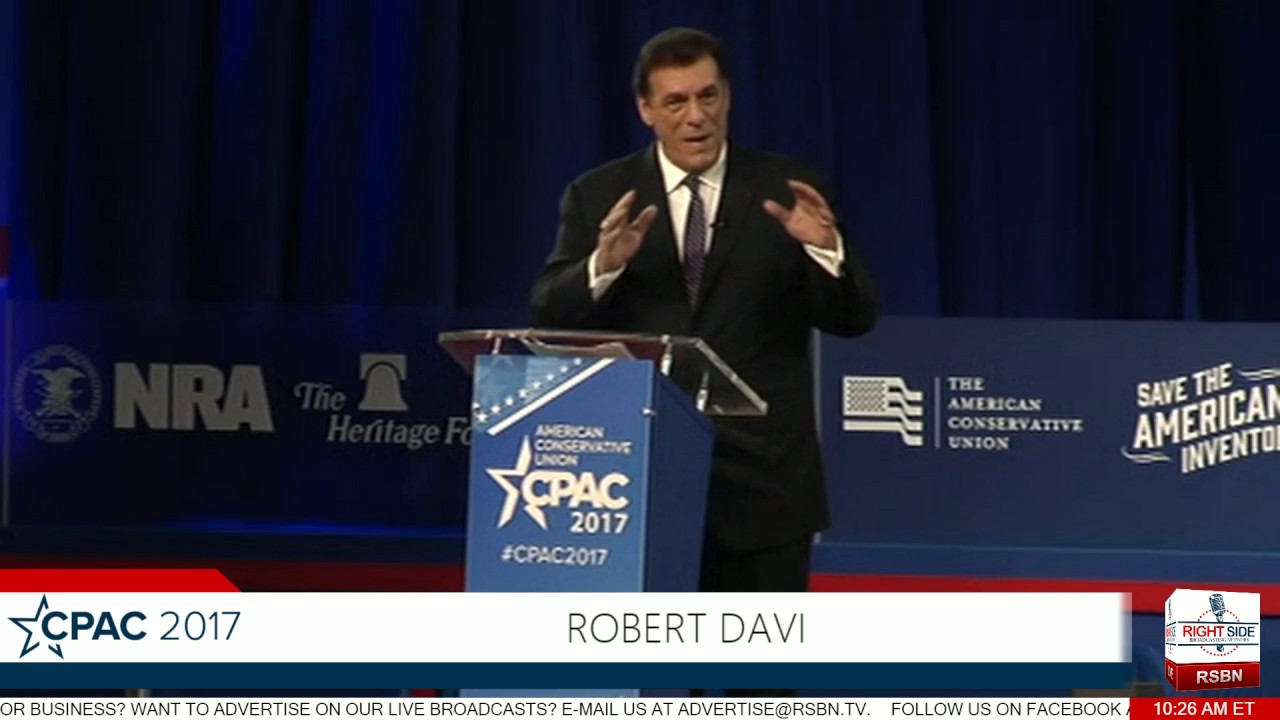 Posted on March 15, 2017 by ifnm| Comments Off on Robert Davi: Hollywood Conservatives Need to ‘Grow a Pair’

“My dear fellow Hollywood conservatives: Do we not as a minority deserve a place at the table? And my dear liberal progressive Hollywood elites: Are we not all Americans?”

Hollywood actor Robert Davi is an outspoken conservative, and he has some advice for his conservative colleagues who are afraid to speak out: “Grow a pair.”

in a Breitbart op-ed, Davi said he is concerned about the “fear and hatred” that’s come out of Hollywood since President Trump was elected.

“The left in Hollywood are quick to flaunt their political allegiances. This provides them the ability to both grow in number and maintain their level of influence,” Davi wrote. “Meanwhile, the right in Hollywood, for the most part, hide in the shadows and cower.”

He said that Hollywood conservatives are intimidated into silence because they are attacked as “irrelevant” or “not A-list enough” if they make their thoughts on politics known.

Davi said that conservatives need to “come out in force” – in Hollywood and across the country – and look for areas of compromise and agreement with the left.

Comments Off on Robert Davi: Hollywood Conservatives Need to ‘Grow a Pair’

Posted on February 25, 2017 by ifnm| Comments Off on Graphic Quotes: Robert Davi on the Media w/Video

“The media, which is a Fourth Estate, should be held accountable by the people.” – Robert Davi

Comments Off on Graphic Quotes: Robert Davi on the Media w/Video

Davi to Hollywood Elite: Invite Illegal Aliens and Refugees to the Oscars… or You’re Racists!

Posted on February 14, 2017 by ifnm| Comments Off on Davi to Hollywood Elite: Invite Illegal Aliens and Refugees to the Oscars… or You’re Racists!

An open letter to the Hollywood Elite and the rest of America: My Dear friends and colleagues,

I have recently been pondering President Trump’s executive action with regard to our nation having extreme vetting and our immigration policy finally being enforced. It has pained me deeply to see such a violent reaction to something that, to my mind, makes absolute common sense.

Let me begin by saying that I am from a family of immigrants that came to this country for a better life. They came to the US “legally,” assimilated, integrated, and learned English to the best of their ability, and demanded we speak it. As we all know, we live in a time in which there are forces who wish to destroy our way of life.

There are thousands of illegal immigrant criminals in the United States whose country of origin will not take them back. These criminals are free on the streets of America.

We have recently heard from a plethora of Hollywood stars on this issue — Meryl Streep, Robert DeNiro, Ashley Judd, Madonna, major agencies, musicians, singers and even the indomitable Shia LaBeouf. After much prayer on this issue, I must now stand in solidarity with all of my Hollywood elite brethren. They are right! The rest of you are wrong!

It is now in this spirit that I make an appeal to all in Hollywood and the media for us to use the Oscars to take a stand for the entire world to see and hear. It is time for Hollywood to lead the way.

I propose that Meryl Steep, Chelsea Handler, Richard Gere, Robert DeNiro, Christoph Waltz and others lead an Oscar first: let’s do away with the rules, barriers, and tickets to the Oscars and after-parties, such as the swanky Vanity Fair party or the Weinsteins’ star-studded affair. I ask all migrants, all illegal immigrant criminals and all un-vetted refugees to converge on Hollywood to come to the Oscars and all the after-parties, even those held at the mansions or the Chateau Marmont or anywhere else. After all, we in the Hollywood community want to show all Islamic extremists that we have love in our hearts — and what better way to do that than by inviting them along on our most important night?

Comments Off on Davi to Hollywood Elite: Invite Illegal Aliens and Refugees to the Oscars… or You’re Racists!

Posted on September 11, 2016 by ifnm| Comments Off on Robert Davi urge Americans to take The Deplorable challenge (Video)

I ASK ALL WHO STAND WITH @realDonaldTrump TO TAKE THE DEPLORABLE CHALLENGE.

I ASK ALL WHO STAND WITH @realDonaldTrump TO TAKE THE DEPLORABLE CHALLENGE @KellyannePolls @EricTrump @IvankaTrump pic.twitter.com/ntMAgSMfxl

From ‘CSI’ to ‘Die Hard,’ conservative Robert Davi is latest on-air ‘legend in the making’ After starring in more than 140 movie and TV roles, from “Die Hard” and “Showgirls” to “CSI” and “Law and Order,” award-winning actor-singer Robert Davi – a Hollywood conservative who passionately supports Donald Trump’s presidential run – has been signed by Talk Radio Network to replace the late Jerry Doyle.

Doyle, himself a veteran actor best known for his starring role in the hit TV sci-fi series “Babylon 5,” died last month at the age of 60. Though the cause of death has not been publicly disclosed, foul play is not suspected. Doyle hosted his popular TRN program, “The Jerry Doyle Show,” for 12 years.

Davi, who had recently guest hosted for Doyle after his passing, proved so hugely popular with listeners that the radio syndicator’s CEO, Mark Masters, worked out an agreement with Davi to permanently take over the nationally broadcast, daily three-hour time slot.

A veteran actor, screenwriter, director, producer and world-class jazz vocalist, Davi is one of the film industry’s most recognizable “tough guys,” from the opera-singing baddie in “The Goonies,” to one of the most popular James Bond villains, Colombian drug lord Franz Sanchez in “Licence to Kill.”

Friends, Rome has burned down. We do not need HUGS. We need someone who can rebuild our nation. I need a hug. Will someone give me a hug? I am upset about the genocide of Christians by the Islamic State.

I am upset by the beheadings of Christians, the castration of women, young girls being sold into slavery, gays being killed, and Jews being killed.

I am upset that moderate, peace-loving Muslims are being killed by both radical Islamists and the raging wars they cause.

I am upset that for the last 30 years, I’ve watched as the middle class has been decimated by failed economic policies of the left and right.

I am upset the GOP has been ineffectual in their leadership; I am upset that each year we hear speeches and yet the message spoken is as stale as a piece of rotten dog food. I am upset that the political platforms being sold by both parties have slowly dismantled America.

I am upset that we have an immigration policy that has been put in place not for America’s interests but that of globalists. I am upset because of the fraud, waste, corruption, and cronyism in our government. I am upset because elitists, the establishment, pundits, and media do not want the political process to be fair. I am upset because they distort, lie, plot, and are an Army of Judases.

Davi: The Long Con–Rubio, Kristol, and the Destruction of the American People by Robert Davi

Posted on March 1, 2016 by ifnm| Comments Off on Davi: The Long Con–Rubio, Kristol, and the Destruction of the American People by Robert Davi

Trump, alone, is exposing the fraud perpetrated on the American people by the ruling class. They will stab themselves in the back to accomplish their globalist agenda. Whether you support Donald Trump or not, if you love America , you must agree, something is rotten in the GOP. My Dear Fellow Americans, I have wondered for years what is happening to our country. It seems both parties are not speaking to the issues eroding America’s Sovereignty.

With the current revelations about Sen. Marco Rubio and the “Gang of Eight” doing the biding of Globalists, it now becomes clearer to me what has been happening. America is being “bamboozled” by both parties. They will do anything to keep power. They pander to conservative or liberal values but in reality it is just a “three card monte” perpetrated on the American people to distract them from the real game being played.

America is being sold into globalism. I am not a conspiracy theorist per se, but I must say nothing else explains what has happened to our country. Nothing else explains how both the House and Senate under GOP control has not really moved the needle. Have you ever thought why?

With conservatives in charge of the House and Senate nothing gets done. Oh I know we get fed the usual steaming pile of horseshit, but have you ever wondered why? Why do you not hear real outrage from the GOPabout the trade deficit? We hear them scream about how the debt is 19 trillion dollars and we hear how unless the GOP gets in power it will keep going up. But why have we not heard about the effect the trade deals have on our country? Instead we hear about another trade deal, TPP .

Comments Off on Davi: The Long Con–Rubio, Kristol, and the Destruction of the American People by Robert Davi

Posted on February 25, 2016 by ifnm| Comments Off on Davi: Donald Trump is the ‘Common Sense Conservative’ America Needs

As Donald Trump was giving his speech on June 16th, letting America know he was running for President, I began to write. While most all the pundits and political experts did not take Mr. Trump’s announcement seriously. I wrote “the common sense, populist message ‘the Donald’ is giving, while not a poetic as that of Ronald Reagan—goes right to the gut of an American population that has been ripping its hair out while watching the destruction of our Republic from within.

The compliance and lack of imagination of the Republican Party along with the aggressive takeover by progressives bent in reshaping America into the image of Europe has brought us to the point we are now in (Not to blow my own horn I suggest you read that article if you haven’t, now 8 months later.)

The phrase I would like you to take note of is “the compliance and lack of Imagination from the Republican Party.” I would like to add to that the pundits and media.

I have watched Trump’s campaign unfold the last eight months and the excitement he has unleashed in the Mr and Mrs John Does of America is unparalleled in our time.

The elite class has been so far removed from the blood, sweat, and fear American’s feel that they have been dumbfounded by the overwhelming response Donald Trump has inspired across the land.

Comments Off on Davi: Donald Trump is the ‘Common Sense Conservative’ America Needs