“BE CAREFUL! This Will Be The Biggest Crash In World History” | Robert Kiyosaki 2022 (Video)

Robert Kiyosaki warns about the biggest crash in world history on its way. “This is the everything bubble.” Robert explains how to prepare and what he personally does to take advantage of the times ahead.

Comments Off on “BE CAREFUL! This Will Be The Biggest Crash In World History” | Robert Kiyosaki 2022 (Video)

Posted on August 10, 2022 by ifnm| Comments Off on Commercial Real Estate Crash is Happening – Stores Can’t Keep Up with Price Increases (Video)

Commercial real estate is in huge trouble. Grocery stores are spending all their time just raising prices. 75% of families feel that inflation is destroying them and they can’t keep up with it.

Posted on January 16, 2022 by ifnm| Comments Off on Diane Francis: Shining a light on money laundering in Canadian real estate

Canadian housing prices are unaffordable, at least in part, because successive governments have failed to address the fact that Canada is one of the world’s foremost tax and secrecy havens, minus the palm trees.

In fact, the term “snow washing” has been coined to describe how easily dirty money can be washed clean, like the snow, in Canada. But there is some hope on the horizon.

The House of Commons finance committee is to be congratulated, in the spirit of better-late-than-never, for opening hearings this week into the country’s dangerously high housing prices. “We risk the possibility of a major housing crash when interest rates go up, just like the Americans experienced in ’08-’09,” said Pierre Poilievre , the Conservative MP who requested hearings.

“It’s time for the finance committee to … begin emergency hearings into where all the money is coming from that is ballooning our housing market, making home ownership unaffordable to our youth and working class and risking a massive financial collapse later on.”

Comments Off on Diane Francis: Shining a light on money laundering in Canadian real estate

Posted on June 11, 2021 by ifnm| Comments Off on Deutsche Bank warns of global ‘time bomb’ coming due to rising inflation (Video)

In an out-of-consensus forecast, Deutsche Bank is warning of a potential crisis coming from inflation. “The effects could be devastating, particularly for the most vulnerable in society,” the firm’s economists said.

Inflation may look like a problem that will go away, but is more likely to persist and lead to a crisis in the years ahead, according to a warning from Deutsche Bank economists.

In a forecast that is well outside the consensus from policymakers and Wall Street, Deutsche issued a dire warning that focusing on stimulus while dismissing inflation fears will prove to be a mistake if not in the near term then in 2023 and beyond.

The analysis especially points the finger at the Federal Reserve and its new framework in which it will tolerate higher inflation for the sake of a full and inclusive recovery. The firm contends that the Fed’s intention not to tighten policy until inflation shows a sustained rise will have dire impacts.

Jim Rogers is an American investor and financial commentator based in Singapore. Rogers is the Chairman of Beeland Interests, Inc. He was the co-founder of the Quantum Fund and was also the creator of the Rogers International Commodities Index. Jim Rogers is mostly known for speaking about investing in the stock market, gold, and macroeconomics. In this Jim Rogers interview, he shares his opinions on why the next crash will be much worst, and how investors can protect themselves from it.

How The Housing Crash Will Happen (Video)

Posted on June 30, 2020 by ifnm| Comments Off on How The Housing Crash Will Happen (Video)

Comments Off on How The Housing Crash Will Happen (Video)

Best Documentary of the Housing Market Crash (of 2020?) | Inside the Meltdown | Behind the Big Short (Video)

Posted on April 29, 2020 by ifnm| Comments Off on Best Documentary of the Housing Market Crash (of 2020?) | Inside the Meltdown | Behind the Big Short (Video)

The first of a four-part investigation into a world of greed and recklessness that led to financial collapse. In the first episode of Meltdown, we hear about four men who brought down the global economy: a billionaire mortgage-seller who fooled millions; a high-rolling banker with a fatal weakness; a ferocious Wall Street predator; and the power behind the throne. The crash of September 2008 brought the largest bankruptcies in world history, pushing more than 30 million people into unemployment and bringing many countries to the edge of insolvency. Wall Street turned back the clock to 1929.

Comments Off on Best Documentary of the Housing Market Crash (of 2020?) | Inside the Meltdown | Behind the Big Short (Video)

What unspoken crisis could drastically impact the life of just about every human being on planet earth – and could happen in the very near future? Stefan Molyneux once again shines a spotlight on the global debt crisis and speculated what will happen when the system inevitability collapses.

The US college debt bubble is becoming dangerous

Posted on June 5, 2017 by ifnm| Comments Off on The US college debt bubble is becoming dangerous

Student loans are now 90 per cent public, in an eerie echo of the housing crisis. 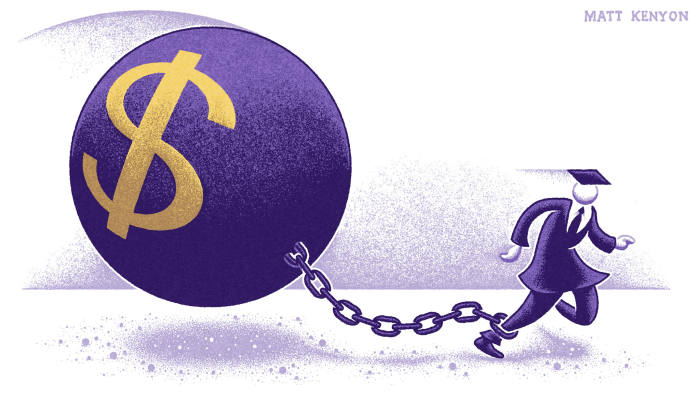 Rapid run-ups in debt are the single biggest predictor of market trouble. So it is worth noting that over the past 10 years the amount of student loan debt in the US has grown by 170 per cent, to a whopping $1.4tn — more than car loans, or credit card debt. Indeed, as an expert at the Consumer Financial Protection Bureau recently pointed out to me, since 2008 we have basically swapped a housing debt bubble for a student loan bubble. No wonder NY Federal Reserve president Bill Dudley fretted last week that high levels of student debt and default are a “headwind to economic activity”.

In America, 44m people have student debt. Eight million of those borrowers are in default. That’s a default rate which is still higher than pre-crisis levels — unlike the default rate for mortgages, credit cards or even car loans.

Rising college education costs will not help shrink those numbers. While the headline consumer price index is 2.7 per cent, between 2016 and 2017 published tuition and fee prices rose by 9 per cent at four-year state institutions, and 13 per cent at posher private colleges.

Comments Off on The US college debt bubble is becoming dangerous