Posted on March 15, 2021 by ifnm| Comments Off on Judge Jeanine ‘Non Whites Only’ Opening Statement (Video)

Posted on February 4, 2018 by ifnm| Comments Off on ‘Biggest Snow Job in Political History’: Judge Jeanine Tears Into Dems for Using Dreamers as ‘Pawns’ (Video)

“I’d like to know what country… that would let 1.8 million people [in] who violated their rules and disrespected their laws, but were still willing to forgive them and generously allow them citizenship,” Pirro said. 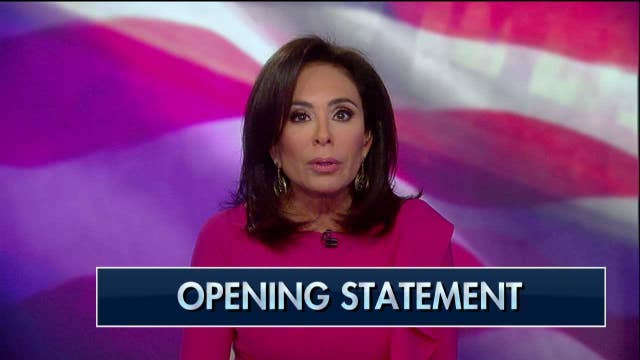 Pirro said Democrats and illegal immigrants are trying to make citizens feel bad about the president’s offer to grant amnesty to millions of people.

Comments Off on ‘Biggest Snow Job in Political History’: Judge Jeanine Tears Into Dems for Using Dreamers as ‘Pawns’ (Video)

Posted on September 6, 2017 by ifnm| Comments Off on Antifa Stronghold Cities SUED for Police Stand Down Orders During Rallies (Video)

Later, a federal lawsuit found 413 pages of documents from the FBI and DOJ relating to the tarmac meeting. Judge Jeanine Pirro said America is moving away from the principles of justice underpinning the Declaration of Independence.

“We didn’t know how deep and dirty the collusion really was” between the FBI, the Justice Department, and Hillary Clinton until recently, the judge said on “Justice” Saturday.

The FBI fielded a Freedom of Information Act request for all documents pertaining to the now infamous tarmac meeting between then-Attorney General Loretta Lynch and Bill Clinton, saying it had no such documents. The Justice Department never responded to the FOIA request.

“That was a calculated, knowing, and intentional lie,” she said of the FBI’s response.

Judge Jeanine Pirro said this morning that the Democratic Party is moving even more to the left, while pushing a hateful message against the president.

Pirro said Americans appear to be rejecting the Democrats’ harsh anti-Trump rhetoric and the victory in Georgia for Republican Karen Handel “reaffirmed” her faith.

“They don’t have a message. The only message is a message of hate. The Democratic Party right now is a party of hate and destruction and I think it’s anti-American,” said Pirro.

House Minority Leader Nancy Pelosi (D-CA) was asked yesterday about comments from Democrats that she should step aside as party leader.

Posted on April 24, 2017 by ifnm| Comments Off on Free Speech: “Best opening statement by Judge Jeanine ever” – Must Watch (Video)

Watching the news about the violent Berkeley riots is akin to watching “a silencing in real-time,” said Pirro, “where people are not allowed to express their opinion if it does not align with the thinking of others.”

In reaction to author Ann Coulter’s travails in trying to speak to students at the University of California, Berkeley, Judge Jeanine Pirro warned viewers, “America is in trouble. They are trying to silence you,” in the opening statement of her Fox News show, “Justice with Judge Jeanine.”

Referencing the First Amendment, which guarantees free speech as the most basic and fundamental right of Americans, Pirro said putting an end to this right puts “our nation at risk and in danger of extinction.”

Comments Off on Free Speech: “Best opening statement by Judge Jeanine ever” – Must Watch (Video)

“If you don’t have the courage to do what you know needs to be done, then you don’t deserve to wear that badge.”

Pirro on Illegal Immigration: ‘Law & Order is Back in the West’ (Video)

Posted on January 31, 2017 by ifnm| Comments Off on Pirro on Illegal Immigration: ‘Law & Order is Back in the West’ (Video)

Pirro said such mayors, like Ed Lee (D-San Francisco) and Bill de Blasio (D-New York), will only hurt their own residents when severe budget cuts must be made. “You can march and you can hate; you can shame and you can demonize, but… law and order is back in the West,” Pirro said, referring to Trump’s executive order withholding federal grant money to cities who will not enforce federal immigration law.

Comments Off on Pirro on Illegal Immigration: ‘Law & Order is Back in the West’ (Video)

“You break the law under Donald Trump, there’s going to be consequences,” Pirro warned. Judge Jeanine Pirro slammed the protesters who vandalized property in the District of Columbia during President Trump’s inauguration.

Pirro called the activity “criminal anarchy”, and said each one of those involved in violent protest “deserved to be prosecuted and jailed.”

About 400 people protested Trump’s inauguration, during which demonstrations police were reportedly attacked, numerous businesses’ windows were shattered and a limousine was torched.

Judge Jeanine: I Could Indict Clinton Operatives Who Were on Tape Planning to Incite Violence at Trump Rallies (Video)

Posted on October 23, 2016 by ifnm| Comments Off on Judge Jeanine: I Could Indict Clinton Operatives Who Were on Tape Planning to Incite Violence at Trump Rallies (Video)

Pirro argued that she could indict the operatives “in three seconds.”

Comments Off on Judge Jeanine: I Could Indict Clinton Operatives Who Were on Tape Planning to Incite Violence at Trump Rallies (Video)