The Media Took Millions in Loans Meant for Small Businesses

Posted on May 3, 2020 by ifnm| Comments Off on The Media Took Millions in Loans Meant for Small Businesses

And politicians are lobbying to give the media billions.

Even while the media is blaring stories about the abuse of the Payroll Protection Plan loans from the Small Business Administration, its own industry took millions in loans and wants billions more.

Unlike many small businesses which were forced to shut down because of the lockdown, the media has been wrongly listed as ‘essential’ and exempted from the shutdowns, but that hasn’t stopped it from taking money that should have been used to compensate small business owners who can’t stay open.

Even when the media operations cashing in on the SBA loans aren’t anyone’s idea of a small business.

The Seattle Times maxed out its PPP loan with a $10 million payout. The Seattle Times is not only Washington State’s largest daily, but its parent company, the Seattle Times Company, owns two other papers, and had, as recently as 3 years ago, put out 7 papers. It also owned multiple newspapers in Maine which it sold off for over $200 million. It had two printing plants, one of which it sold. The Rotary Offset Press, which it still owns, continues to print a variety of magazines and newspapers.

Posted on April 28, 2020 by ifnm| Comments Off on Stop Bailing Out Big Companies (Video)

A message from Patrick Bet-David.

Comments Off on Stop Bailing Out Big Companies (Video)

Posted on April 23, 2020 by ifnm| Comments Off on Tucker: Rich colleges get bailed out while American people suffer (Video)

American young people are poor, but the schools that ‘educate’ them are incredibly wealthy. They’re getting a bailout young people could only dream of.

Comments Off on Tucker: Rich colleges get bailed out while American people suffer (Video)

Posted on January 29, 2018 by ifnm| Comments Off on Ezra Levant: Trudeau to bail out failing newspapers (Video)

Ezra Levant of TheRebel.media reports on Justin Trudeau’s plan to announce a bailout for his allies in the failing mainstream media. 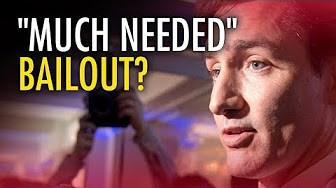 Comments Off on Ezra Levant: Trudeau to bail out failing newspapers (Video)

Posted on May 6, 2017 by ifnm| Comments Off on State Funded Fake News Bailout? Yep! (Video)

The Minister of Canadian Heritage has called for a “true redefinition” of the Canadian media industry, which is code for a massive taxpayer funded bailout of the failing fake news media. What does Stefan Molyneux think about being forced to pay for dying propaganda outlets which the free market has already rejected?

Posted on July 3, 2016 by ifnm| Comments Off on New Bailout Bill for Puerto Rico Supposedly “Won’t Cost Taxpayers a Dime”

It won’t matter that those bonds will carry junk ratings. What will matter is the yield — currently more than 12 percent on its present bonds that mature in 2035 — which is triple-tax-exempt to investors. It’s that enticement, with the help of bond brokers such as Stoever, that have made money available to Puerto Rico not only to fund its overly generous retirement plans for its workers, but also to roll over maturing bonds with new ones while borrowing to pay their interest along the way.

Since Senate Majority Leader Mitch McConnell said it, it must be true: The bill passed by the Senate on Wednesday to rescue Puerto Rico from its overwhelming financial troubles “won’t cost taxpayers a dime, not a dime.”

The president has said he would sign into law the dreadfully misnamed Puerto Rico Oversight, Management and Economic Stability Act (PROMESA) immediately and would then begin to nominate the seven members of the board to oversee its implementation. That board is to become effective on September 1.

That provides no help to Puerto Rico, which will default on most of a $2 billion payment due July 1. And it does nothing to address the additional $2 billion the government owes to its various vendors, suppliers, and contractors, who have been waiting months to get paid for work already completed and services already rendered. While the focus of all the congressional debate has been on the $73 billion the little island of less than four million citizens owes to various creditors, nothing was said about the other $40 billion shortfall in the island’s pension plans for its government workers. And nothing in the bill addresses the underlying problem: a dysfunctional economy laden with regulations that not only punish small businesses but discourage the creation of new ones.

No bailout for Puerto Rico! by John Stossel

Posted on May 4, 2016 by ifnm| Comments Off on No bailout for Puerto Rico! by John Stossel

Island’s ‘culture of helplessness and entitlement’ shouldn’t be rewarded.

The Republican and Democratic presidential nominees have been chosen. Ignore the deluded supporters of Bernie Sanders and Ted Cruz. It’s over. The odds at ElectionBettingOdds.com make it clear: It will be Donald vs. Hillary.

A closer contest would be: Who will bankrupt America first, Trump or Clinton?

Trump’s a contender because he promises a trade war. That’s what gave us the Great Depression. Trump claims that China is “raping” America. No, Donald, rape is force. Your proposed tariffs are also force. Trade is voluntary and good. Big difference.

This week, Puerto Rico defaulted on $370 million worth of bonds.

The territory’s “generous” government squandered the island’s resources. Decades of leftist governors hired their friends. In Puerto Rico and Greece, about one in four workers works for government, compared to 14.6 percent in the mainland U.S.

Comments Off on No bailout for Puerto Rico! by John Stossel

Posted on April 15, 2016 by ifnm| Comments Off on Obama Cronies Cash in on Puerto Rico Bailout

Amassing a $73 billion debt on an island of just three million people is quite an accomplishment. Borrowing more than $24,000 per resident ought to provide a platinum level of public services for the citizens of Puerto Rico. It has certainly provided platinum-level contracts for politically-connected consultants. This week, Puerto Rico is begging the GOP Congress for help escaping its massive $73 billion debt obligation. House Speaker Rep. Paul Ryan is spearheading legislation that would allow the island territory to shed many of its debts in federal bankruptcy court. The island’s debt crisis has not stopped it from opening its wallet to former members of President Obama’s inner circle.

SKDKnickerbocker, the powerful communications firm headed by former Obama senior staffers Anita Dunn and Bill Burton, has a $3.4 million contract with Puerto Rico to handle public relations for the island’s current debt crisis. The contract includes up to $500,000 in paid advertising to promote a bailout of Puerto Rico.

Comments Off on Obama Cronies Cash in on Puerto Rico Bailout During negotiations of the omnibus budget deal at the end of 2015, House Republican Speaker Rep. Paul Ryan promised House Democrat Leader Rep. Nancy Pelosi that Congress would consider legislation to grant the Island with bankruptcy protection from its debts. The tentative deadline to begin action was March 31.

The House Natural Resources Committee is drafting a rescue package for Puerto Rico. Hearings on the measure will begin this week. The House conservative Republican Study Committee blasted an early draft of the Puerto Rico legislation, calling it a “bankruptcy-style involuntary restructuring.”

“The discussion draft legislation regarding Puerto Rico’s fiscal situation includes provisions that essentially provide for a federally forced restructuring the island’s debt,” Rep. Bill Flores, Chair of the RSC, said in a statement. “This approach is inconsistent with the Republican Study Committee’s position on this issue.”

Posted on April 2, 2016 by ifnm| Comments Off on After Taxpayer Bailout, General Motors Plans Rollout Of Chinese-Built Buicks In America

In 2016, General Motors will roll out for the first time in the United States a new model of Buick built exclusively in China: the Buick Envision. It’s the first time the iconic American auto manufacturer will sell cars built in China in the United States since receiving a sizable taxpayer-funded bailout at the end of the George W. Bush administration and beginning of the Barack Obama administration.

The Buick Envision–which was available in China for purchase as far back as 2014–will make its official debut in the United States in the summer of 2016.

The Buick Envision bills itself “a luxury crossover designed to turn heads and welcome you in.”

A quick search of “Buick Envision” leads to the Buick Envision’s website where one can explore all the features and design of the vehicle. The website doesn’t appear to make any reference to the fact that the Envision is manufactured in China.

The issue of U.S. auto manufacturers moving production facilities overseas has taken a center stage this presidential election, with the rise of both billionaire Donald Trump in the Republican Party and of Sen. Bernie Sanders of Vermont in the Democratic Party.

Comments Off on After Taxpayer Bailout, General Motors Plans Rollout Of Chinese-Built Buicks In America