Posted on July 20, 2016 by ifnm| Comments Off on Ben Carson links Hillary to Lucifer at RNC (Video)

‘We will not be blessed, and our nation will go down the tubes’ 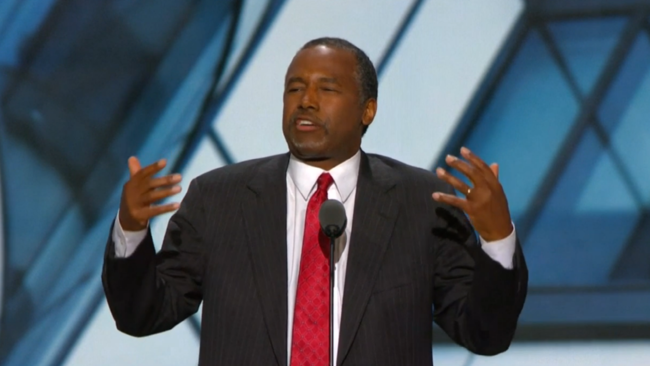 Ben Carson wanted to get one thing straight right away in his Tuesday speech to Republican convention delegates: “I am not politically correct.”

With that out of the way, the retired neurosurgeon and former presidential candidate went on the offensive against “secular progressives,” the “political elite,” the media, Democratic candidate Hillary Clinton — and Saul Alinsky and Lucifer.

Carson told the crowd that one of Clinton’s role models, community organizer Alinsky, “acknowledges Lucifer” in one of his books, reflecting the views of secular progressives who would remove God from the nation’s life.

Ben Carson Rips Political Correctness in Wake of Orlando Shooting: ‘We Have Got to Get Serious’ (Video)

Posted on June 13, 2016 by ifnm| Comments Off on Ben Carson Rips Political Correctness in Wake of Orlando Shooting: ‘We Have Got to Get Serious’ (Video)

“This is not to say that all people of Islamic background are bad people, no more than it would be any other group who had radical elements. But we’ve got to be smart enough to separate the two things out. We have got to get serious about this or we’re going to destroy ourselves with our silliness,” Carson said.

Sunday on Fox News Channel’s “Fox & Friends Weekend,” former Johns Hopkins neurosurgeon Dr. Ben Carson, formerly a candidate for the 2016 GOP presidential nomination, reacted to the mass shooting at an Orlando nightclub that resulted in the deaths 50 and 53 injured.

Carson singled out political correctness as a factor to overcome in combating these incidents in the future.

“Obviously it’s very concerning,” Carson said. “As I’ve been saying for many months, we have to get much more serious about the way that we look at potential terrorist activity. You know, if you were having a party at your house and you were inviting a hundred people, and you had knowledge that one of those 100 people was a terrorist intent on creating havoc, would you still have that party? Or would you just say, ‘Well it’s just one out of a hundred’? That’s not so bad. We really don’t have to change anything. Well that’s the situation that we’re in now. We need very carefully examine how we’re doing things and the political correctness is beyond the pale.”

Comments Off on Ben Carson Rips Political Correctness in Wake of Orlando Shooting: ‘We Have Got to Get Serious’ (Video)

Graphic Quotes: Ben Carson on Politicians and Our Problems

Posted on May 8, 2016 by ifnm| Comments Off on Graphic Quotes: Ben Carson on Politicians and Our Problems

“We’ve been conditioned to think that only politicians can solve our problems. But at some point, maybe we will wake up and recognize that it was politicians who created our problems.” – Dr. Ben Carson

Comments Off on Graphic Quotes: Ben Carson on Politicians and Our Problems

Carson: Maybe Tubman should go on the $2 bill

“I love Harriet Tubman. I love what she did, but we can find another way to honor her. Maybe a $2 bill,” Carson said.

Ben Carson thinks that Harriet Tubman might be better on the $2 bill than the $20.

The retired neurosurgeon and Donald Trump surrogate was reacting to a story first reported by POLITICO that Tubman — the African-American abolitionist and a woman — will replace President Andrew Jackson on the front of the $20 bill.

“And here he gets kicked off the $20 bill,” host Neil Cavuto said.

“Right, in honor of that we kick him off of the money,” Carson said, though Jackson is expected to stay on the back of the bill.

“Are you anti-Harriet Tubman?” Cavuto asked.

Comments Off on Carson: Maybe Tubman should go on the $2 bill

Posted on March 29, 2016 by ifnm| Comments Off on Carson: If Nomination Taken From Trump, GOP Faces ‘Absolute Destruction’ (Video)

“I can tell you this, if there are shenanigans, if it’s not straightforward, all of those millions of people that Donald Trump has brought into the arena are not going to stay there, and the Republicans are going to lose. And it’s going to be not only the presidency, but it’s going to be the Senate, and it could even be the House. It’s going to be absolute destruction.” Republican presidential candidate Dr. Ben Carson is blasting Hillary Clinton after Breitbart News reported that she backed off from an effort to save pregnant women and children from a dangerous chemical once the Dow Chemical company joined the Clinton Global Initiative. Breitbart News reported Saturday that Clinton, under pressure amid an environmental crisis in parts of New York State, spearheaded a letter to the EPA and also introduced a bill in 2007 called The TCE Reduction Act, which aimed to set new environmental standards for use of the industrial solvent Trichloroethylene (TCE).

But the bill never went anywhere. Two months after the bill was introduced, Dow Chemical, the nation’s largest TCE producer, joined the Clinton Global Initiative and ended up giving money to the Initiative and also a private advisory firm linked to Bill Clinton.

“Dr. Carson sees this as yet another example of Washington run amok,” his campaign’s communications director A. Larry Ross told Breitbart News.

“He is the one candidate whom voters see as unbought and unbossed and whose only special interest group is ‘We The People.’ Not once in this campaign has Dr. Carson compromised his values or principles for political expediency. That is exactly how he will serve in the Oval Office.”

Posted on February 17, 2016 by ifnm| Comments Off on Carson: ‘Schizophrenic’ Shariah Muslims in U.S. can’t integrate

Dr. Ben Carson says Muslims who claim to be faithful to the U.S. Constitution and Shariah law are “schizophrenic.”

The Republican presidential hopeful appeared on Breitbart News Daily on SiriusXM on Tuesday and was asked whether devout Muslims can credibly claim they are loyal to America’s founding principles.

“Do you think that Muslims that are Shariah-adherent can … integrate into a society where you have the rule of law and … a federal system?” Carson was asked, Mediaite reported.

“Only if they’re schizophrenic,” the retired neurosurgeon replied. “I don’t see how they could do it otherwise, because you have two different philosophies warring at you. … So, no. That would be very difficult. That’s why Teddy Roosevelt said what he said. He said you’re welcome to come here from any place and [practice] any religion as long as you accept our ways and want to be an American. If you don’t, then stay where you are.”

Carson was then asked to comment on former President George W. Bush’s claim after the September 11, 2001, terror attacks that “Islam a religion of peace.”

“If you accept all the components of Islam, including Shariah, it is not a religion of peace. It is a religion of domination,” said Carson.

Ben Carson: Black Dependence on Democrats Has Meant ‘Poverty and Broken Homes and Crime and Incarceration’

Posted on February 15, 2016 by ifnm| Comments Off on Ben Carson: Black Dependence on Democrats Has Meant ‘Poverty and Broken Homes and Crime and Incarceration’ Carson says that relationship, “has yielded more poverty and broken homes and crime and incarceration and it’s completely unnecessary.”

“We need to talk about the effects of out of wedlock birth. How that stops that woman’s education and sends that child into poverty,” he later added.

He also cited how not having a father figure has a deleterious effect on young black man coming up, “so that they don’t have a good appreciation of how to react to authority, which leads to a lot of death, which leads to a lot of incarceration.” He also discussed education and “how you can create your own pathway to success” as not having been emphasized enough within the Black community.

Throwing away faith and family are deleterious to any community and it’s extra devastating on the Black community. And I believe that many people who are trying to cultivate their votes know that and are intentionally destroying those pillars of strength to keep people in a dependent position.

Comments Off on Ben Carson: Black Dependence on Democrats Has Meant ‘Poverty and Broken Homes and Crime and Incarceration’