Ann Coulter, author of Resistance Is Futile!: How the Trump-Hating Left Lost Its Collective Mind, revealed an encounter she had with Jeffrey Epstein in 2001, recalling the incidental meeting on Thursday’s edition of SiriusXM’s Breitbart News Tonight with host Rebecca Mansour and special guest host John Binder.

Coulter remembered, “I had my own encounter with Jeffrey Epstein, and before I give you this little vignette, it’s very important I tell you something. All of my friends know I have absolutely no radar on freaks on weird people. I’m a terrible judge of character. When I first meet someone, I’m not allowed to invite anyone from a book signing to have drinks with us because I’ve done it so many times, and we end up with some bipolar lunatic. So anyone who knows me will tell I cannot judge people.”

Coulter shared the context of her brush with Epstein: “To make a long story short — pouring rain, day before 9/11, I’m leaving for speeches, I can’t get home, my editor died, book was canceled…It turned out to be the number one book all summer — anyway, I’m standing outside the funeral home, it’s pouring rain, traffic all over, no cab. So this stretch limo pulls up, and a guy leans out. He knows me by name, says who he is, names someone that we know in common — which, by the way, wouldn’t be that great a recommendation guide; she hangs around sleazy guys — but I think to myself, ‘Okay, I just need to go 20 blocks to the Upper East Side.”

On 21 Nov. 2019, Andy Ngo was interviewed by Dr. Drew and Leeann Tweeden about how antifa protesters tried to shut down Ann Coulter at UC Berkeley.

Posted on February 23, 2018 by ifnm| Comments Off on Amazing New Breakthrough To Reduce Mass Shootings! by Ann Coulter

There have been about 34 mass shootings since 2000. Forty-seven percent — 16 — were committed by first- and second-generation immigrants, i.e. people who never would have been here but for Teddy Kennedy’s 1965 immigration act.

As fun as it is to ridicule the FBI for devoting massive resources to chasing down Hillary Clinton’s oppo research while blowing off repeated, specific warnings about school shooter Nikolas Cruz, we’ve put a lot on the agency’s plate.

We’re hauling in nearly 2 million manifestly unvetted Third World immigrants every year, leading to a slew of FBI “Watch Lists” with a million names apiece. In 2015, Director James Comey said that there were ISIS investigations in all 50 states — even Idaho and Alaska! And that’s just one terrorist organization.

Maybe the FBI brass would still be a bunch of incompetent, PC nincompoops if we weren’t dumping millions of psychotic and terrorist foreigners on the country. But even the most efficient organization would have trouble keeping track of the Nikolas Cruzes when our immigration policies require approximately one-third of the country to be constantly watching another third of the country.

Thanks to our Second Amendment, the United States has fewer mass shootings per capita than many other developed countries, including Norway, France, Switzerland, Finland, Belgium and the Czech Republic. (And 98 percent of our mass shootings occur in “gun-free zones.”)

But imagine if we could cut our mass shootings in half?

There have been about 34 mass shootings since 2000. Forty-seven percent — 16 — were committed by first- and second-generation immigrants, i.e. people who never would have been here but for Teddy Kennedy’s 1965 immigration act.

Comments Off on Amazing New Breakthrough To Reduce Mass Shootings! by Ann Coulter

Posted on February 11, 2018 by ifnm| Comments Off on Ann Coulter: I’ve Been Dying to Be Hated in Europe Again | Good Morning Britain (Video)

Ann Coulter joins Good Morning Britain to talk about the captured British Jihadis and her feelings towards Donald Trump. 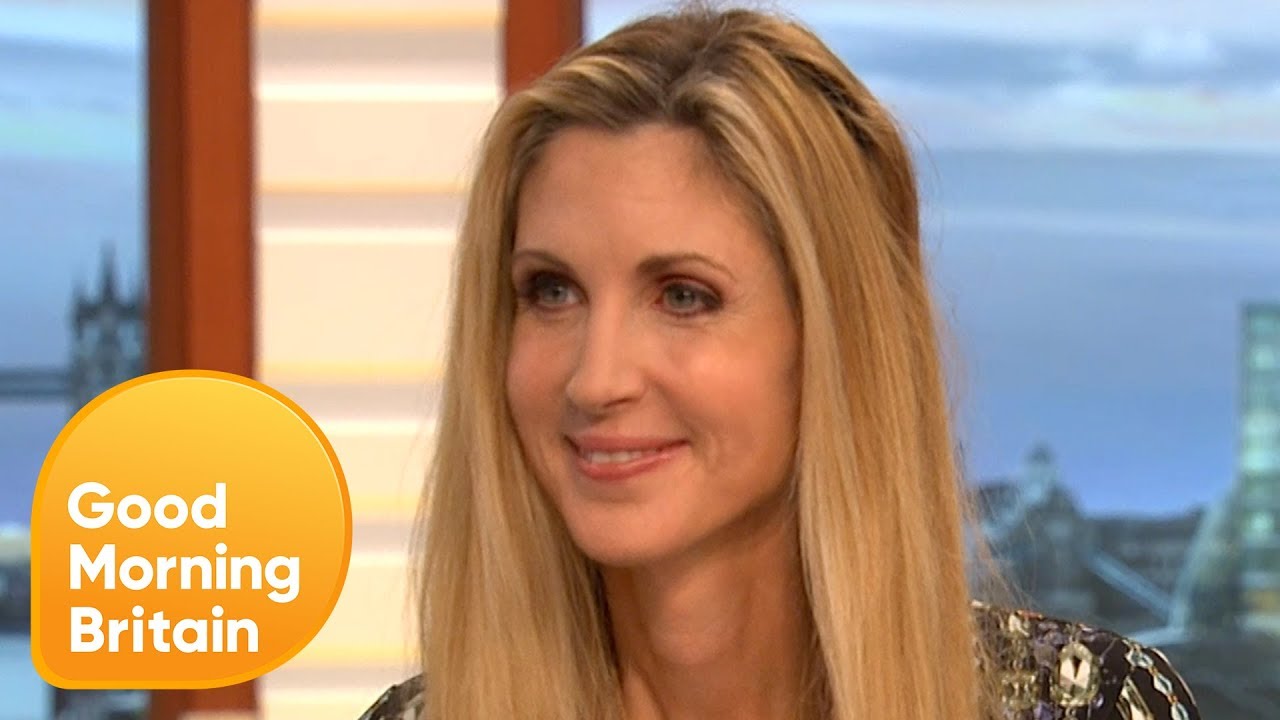 Comments Off on Ann Coulter: I’ve Been Dying to Be Hated in Europe Again | Good Morning Britain (Video) The episode follows conservative personality, Martha Cobb (Rhea Seehorn), who delivers a speech ironically ripping “the liberal snowflakes,” to a Make America Great Again hat-wearing crowd on a university campus. Cobb’s speech is cut short when a gang of Antifa protesters clash with a mob of white supremacists. Violence ensues, and Cobb is later found unconscious after being beaten and sexually assaulted with the pole of a protest sign.

The NYPD detectives investigating Cobb’s assault are seen debating the merits of her political views — regulars Olivia Benson (Mariska Hargitay), Odafin Tutuola (Ice-T), and Amanda Rollins (Kelli Giddish) argue whether the unknown assailant could have been motivated by Cobb’s support of policies that would “close down Planned Parenthood and deport the Dreamers.” In an interview with conservative talk radio host Howie Carr, Coulter said Sessions should be gearing up to arrest Washington, D.C. politicians who arrive at Trump’s SOTU address with illegal aliens.

COULTER: I’ve also heard they’re planning on inviting illegal aliens. So Jeff Sessions better be ready to arrest all of them for conspiring to commit a crime, which I believe is a felony under federal law in all 50 states, even if the crime itself is not a felony. I mean, they had to have meetings, they had to make a phone call. These are people who are in the country illegally and anyone conspiring with them to keep them here illegally, to invite them to a State of the Union address, Jeff Sessions should have them all arrested and I mean the congressmen.

But seriously, Sessions should be looking at all of these governors and mayors for conspiring to commit federal crimes.

Posted on January 25, 2018 by ifnm| Comments Off on Ann Coulter: Lindsey Graham, the Uninvited Guest

Why does Sen. Lindsey Graham have a seat at the table on immigration? Are Jorge Ramos and Vicente Fox unavailable? Graham’s claim to fame is: 1) having twice negotiated a voluntary surrender for the GOP on immigration; and 2) winning 0.00 percent of the vote when he ran for president two years ago.

You could run for president on the platform that we should kill babies and eat them, and you’d get more votes than Lindsey Graham. Who designated this most remote of back-benchers, thoroughly rejected by the American people, as the principal negotiator on Trump’s central campaign promise?

Graham’s thought process seems to be: We had an election, I ran for president; literally no one voted for me, so my views should prevail over the guy who won an Electoral College landslide.

How about getting Dennis Kucinich in there? Has anyone asked Martin O’Malley for help in the “DACA” negotiations?

To a rapturous media, Graham has been peddling the lie that President Trump blew up a beautiful bipartisan deal on immigration. It wasn’t “bipartisan,” except in the sense of being “angrily rejected by the voters.”

Comments Off on Ann Coulter: Lindsey Graham, the Uninvited Guest

Posted on December 27, 2017 by ifnm| Comments Off on Ann Coulter: ‘Let’s Start by Deporting the DREAMers!’ (Audio) The status quo of demographic change wrought by immigration — both lawful and unlawful — must change in order to “save the country,” said Coulter.

Describing DREAMers — those targeted by the Obama administration’s Deferred Action for Childhood Arrivals (DACA) policy and subsequently proposed bills seeking to codify it as federal law — as “the most annoying people in the universe,” Coulter jestingly recommended prioritizing the most obnoxious cohort of illegal immigrants for deportation:

It has to be said that many of the legal and illegal low-wage workers, they’re incredibly hard workers, they’re really nice people, and it occurred to me … that I actually like all of the illegal immigrants except the DREAMers. They’re the ones I want deported first because they’re the activists. They’re the obnoxious ones. They’re the ones who go to congressional offices and stamp their feet and say, “How dare you not rush to grant us amnesty?” Whereas the other illegals don’t have the time to be protesting; they’re busy working, being polite, being so friendly and nice and saying, “Merry Christmas.”

No. Let’s start by deporting the DREAMers. That’s point one.

Comments Off on Ann Coulter: ‘Let’s Start by Deporting the DREAMers!’ (Audio)

The History of Sex in America, Part 1 by Ann Coulter

Posted on November 24, 2017 by ifnm| Comments Off on The History of Sex in America, Part 1 by Ann Coulter

1968-1991: Manson Family values swept the nation, with the rise of the Worst Generation. Left-wing men, from senators to hippies, treated women as subjugated beings and sexual playthings.

“The Evolving Concept of Sexual Harassment”

Thousands and thousands of headlines like these appeared in newspapers across the country — back in 1991. Spare us the self-righteousness, millennials.

There have been tectonic shifts in Americans’ attitudes about sex, but the idea of thanking someone by sending him a prostitute with a note in her vagina is of relatively recent vintage. (Hat tip: Hollywood’s Robert Evans!) (For Larry David fans, Evans’ birth name was Robert Shapera.)

These are the major epochs in American sexual history:

1607-1968: Women in America were treated better than any place else on Earth, at any time in history.

1968-1991: Manson Family values swept the nation, with the rise of the Worst Generation. Left-wing men, from senators to hippies, treated women as subjugated beings and sexual playthings.

The Weathermen forced girls into group sex. The Supreme Court granted constitutional protection to the most vile forms of pornography. Hollywood dumped the Hays Code, and promptly went pedal-to-the-metal on movies showing the bright side of the sexual exploitation of women.

Sen. Teddy Kennedy let a girl drown at Chappaquiddick, after driving with his lights off to avoid detection on the way to a late-night extramarital liaison, and then didn’t report the accident for hours, passing houses with their lights on, while he tried to construct an alibi, ending with him asking his cousin to say he was driving.

Comments Off on The History of Sex in America, Part 1 by Ann Coulter

Posted on November 17, 2017 by ifnm| Comments Off on Yes, Virginia, Immigration Is Turning The Country Blue by Ann Coulter

Hey, Republicans! Did you enjoy Election Night last week? Get ready for a lot more nights like that as immigration turns every last corner of the country blue.

When Ed Gillespie lost in Virginia, liberals crowed about how they’re winning the war of ideas. The country has thoroughly, emphatically rejected Trumpism!

Republicans, being idiots, played along, arguing only about whether Gillespie’s problem was that he didn’t embrace Trump enough or embraced him too much.

Gillespie’s campaign was fine. No cleverer arguments, community outreach or perfectly timed mailings would have changed the result. Contrary to The New York Times’ celebratory article in last Sunday’s magazine, “How the ‘Resistance’ Helped Democrats Dominate Virginia,” it wasn’t Democratic operative Kathryn Sorenson’s savvy use of Facebook, Google and Eventbrites that carried the day. “The Resistance” didn’t win.

Comments Off on Yes, Virginia, Immigration Is Turning The Country Blue by Ann Coulter