Posted on September 30, 2016 by ifnm| Comments Off on Breaking Through the Progressive Alt-Right Stigma – an Interview with Jack Donovan (Audio)

On this episode of Blunt Force Truth, Chuck Woolery and Mark Young invite Jack Donovan back for a rational discussion about what Alt-Right Movement actually encompasses, dispelling the fear mongering generated by Progressives.

Donovan, one of people at the forefront of the movement, talks about what drives his critique of modern, mainstream culture and shapes his philosophies on masculinity and the need for a “tribe.”

Donovan is an author, podcaster and speaker who addresses the challenges men face today, promoting what he views as the essential components of what it means to be a man: strength, courage, mastery and honor.

Donald J. Trump for President rally in Bedford, NH at the NH Sportsplex.

Nuke Face Off: Pakistan threatens to DESTROY India with nuclear bomb as atomic enemies edge to the brink of war

Posted on September 30, 2016 by ifnm| Comments Off on Nuke Face Off: Pakistan threatens to DESTROY India with nuclear bomb as atomic enemies edge to the brink of war

Tensions have risen dramatically between the nuclear-armed neighbours. 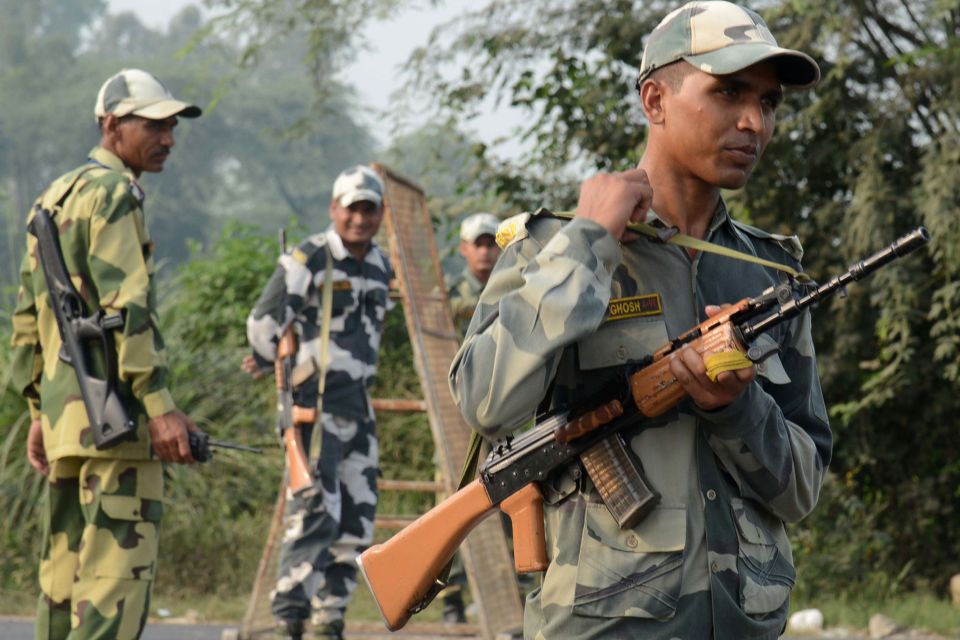 Pakistan’s Defence Minister has threatened to “destroy” India – after India said on Thursday it had carried out “surgical strikes” on suspected militants preparing to infiltrate from Pakistan-ruled Kashmir.

The strikes, which were a response to shots fired across the de facto border through the disputed Himalayan territory, could lead to a military escalation between the two nuclear-armed neighbours – risking a ceasefire agreed in 2003.

Tensions have been heightened since an attack on an Indian military base in Kashmir earlier this month, which left 18 soldiers dead.

Both countries claim Kashmir in full, but rule separate parts – and have fought three wars over Kashmir since gaining independence from Britain in 1947.

Responding to India’s latest strikes, Defence Minister Khawaja Asif said: “We will destroy India if it dares to impose war on us.

“Pakistan army is fully prepared to answer any misadventure of India.

“We have not made atomic device to display in a showcase.

“If a such a situation arises we will use it and eliminate India.”

Comments Off on Nuke Face Off: Pakistan threatens to DESTROY India with nuclear bomb as atomic enemies edge to the brink of war

Meet the New Authoritarian Masters of the Internet

Posted on September 30, 2016 by ifnm| Comments Off on Meet the New Authoritarian Masters of the Internet

President Barack Obama’s drive to hand off control of Internet domains to a foreign multi-national operation will give some very unpleasant regimes equal say over the future of online speech and commerce. In fact, they are likely to have much more influence than America, because they will collectively push hard for a more tightly controlled Internet, and they are known for aggressively using political and economic pressure to get what they want.

Here’s a look at some of the regimes that will begin shaping the future of the Internet in just a few days, if President Obama gets his way.

China wrote the book on authoritarian control of online speech. The legendary “Great Firewall of China” prevents citizens of the communist state from accessing global content the Politburo disapproves of. Chinese technology companies are required by law to provide the regime with backdoor access to just about everything.

The Chinese government outright banned online news reporting in July, granting the government even tighter control over the spread of information. Websites are only permitted to post news from official government sources. Chinese online news wasn’t exactly a bastion of freedom before that, of course, but at least the government censors had to track down news stories they disliked and demand the site administrators take them down.

Comments Off on Meet the New Authoritarian Masters of the Internet

Colin Kaepernick may have started the kneeling in protest of America’s national anthem, but Stephen Martin, owner of Prime Time Sports in Colorado Springs, Colorado, has started a patriotic rising unlike anything that’s ever been done before.

Martin first took a stand when NFL player Brandon Marshall refused to stand for the anthem. Immediately, Martin cancelled Marshall’s scheduled autograph signing event in his store. But he wasn’t done. He replaced the star’s event with something entirely different in his store, and in one week, it has grown to epic proportions that he can hardly even keep up with now.

He put out a post on Facebook, respectfully disagreeing with the disrespect of the nation’s flag and anthem, then proceeded to explain just what the flag means to him, and the sacrifice of all the men and women who have fought for it. Martin invited people to send photos of their loved ones who are veterans, in active service, or who have been injured or given their lives in the line of duty.

Posted on September 30, 2016 by ifnm| Comments Off on Suspect in Texas double homicide had been deported 3 times to Mexico

Navarro Rios returned to the U.S. at some point and was again deported in October 2009 for re-entering by falsely claiming U.S. citizenship, Rusnok said. He again came back into the U.S. and was prosecuted on vehicle burglary charges in the Texas city of Georgetown in 2010 and 2011. He was deported in March 2014 after completing a prison sentence for re-entry after deportation, according to a statement Wednesday from ICE. A man who allegedly killed two people and kidnapped a third one over the weekend in the Dallas area was living in the United States illegally under a false name and had been deported three times to Mexico in the last two decades, immigration officials said on Wednesday.

The 40-year-old man is suspected of killing a motorist in Dallas and a man at a gas station in nearby Cedar Hill. He allegedly also kidnapped a landscape worker in Austin.

“This is an example of the worst of the worst that we go after on a daily basis,” Hector Gomez, supervisory deputy marshal of the Lone Star Fugitive Task Force, told the Dallas Morning News.

Police have not released a motive for either slaying, both of which occurred on Sunday night.

Navarro was arrested Tuesday after a standoff at his relatives’ apartment in Georgetown, about 25 miles north of Austin. Police said he was caught after he set fire to part of the building.

Posted on September 30, 2016 by ifnm| Comments Off on Hillary’s Debate Lies

With her comments about crime, policing, and race, the candidate helps push a false—and dangerous—narrative.

Criminologists have tried for decades to prove that the overrepresentation of blacks in prison is due to criminal-justice racism. They have always come up short. They have been forced to the same conclusion as Michael Tonry in his book, Malign Neglect: “Racial differences in patterns of offending, not racial bias by police and other officials, are the principal reason that such greater proportions of blacks than whites are arrested, prosecuted, convicted and imprisoned,” Tonry wrote. In 1997, criminologists Robert Sampson and Janet Lauritsen reviewed the massive literature on charging and sentencing. They found overwhelming evidence establishing that “large racial differences in criminal offending,” not racism, explained why more blacks were in prison proportionately than whites and for longer terms.

Comments Off on Hillary’s Debate Lies

Mall shooter not a U.S. citizen – voted in 3 elections

Posted on September 30, 2016 by ifnm| Comments Off on Mall shooter not a U.S. citizen – voted in 3 elections

Add voter fraud to the list of Arcan Cetin’s offenses.

Cetin, 20, is the Turkish immigrant arrested Saturday for the Friday night shooting and killing of five people in a Burlington, Washington, mall. Security camera’s show Cetin entering the mall briefly without a weapon, leaving and then returning with a rifle.

Cetin fled but was apprehended 24 hours later. He has reportedly confessed to the five murders.

Now, election officials and Washington Secretary of State, Kim Wyman, have confirmed that Cetin was illegally registered to vote and voted in three elections in the state in 2014, 2015 and 2016.

Cetin is classified as a permanent resident alien with a green card that allows him to work, but he is not a citizen with the right to vote.

Cetin immigrated to the U.S. from Turkey when he was 6-years-old.

Voters in Washington must attest to their American citizenship when registering to vote, but the state does not require proof. Election officials told KVI News the state’s election system operates on the honor system.

Comments Off on Mall shooter not a U.S. citizen – voted in 3 elections

FCC Commissioner on Internet Oversight Switch: ‘If You Cherish Free Expression,’ ‘You Should Be Worried,’ This Is ‘Irreversible’ (Video)

Posted on September 29, 2016 by ifnm| Comments Off on FCC Commissioner on Internet Oversight Switch: ‘If You Cherish Free Expression,’ ‘You Should Be Worried,’ This Is ‘Irreversible’ (Video)

On Wednesday’s “Sean Hannity Show,” FCC Commissioner Ajit Pai (R) stated that the plan to “essentially give up the US oversight role…of the Internet” to ICANN is something that should worry anyone who cherishes “free expression, and free speech rights generally,” and could potentially cede oversight of the Internet to “foreign governments who might not share our values.” He further stated that such a move is “irreversible.” Pai said, “This proposal is to essentially give up the US oversight role that it’s had for the last 20 years, basically for the entire commercial lifespan of the Internet to a company called ICANN, which is an international organization, which includes a number of foreign countries. And, it’s an unprecedented move, and one that, as Mr. DeMint pointed out, is irreversible. Once we give up this oversight role, we can’t get it back.”

He added that Internet oversight is a case of, “if it ain’t broke, don’t fix it.” Pai further stated, “[I]f you cherish free expression, and free speech rights generally, you should be worried, I think, when there’s — this oversight role’s going to be ceded to potentially, foreign governments who might not share our values.”

Comments Off on FCC Commissioner on Internet Oversight Switch: ‘If You Cherish Free Expression,’ ‘You Should Be Worried,’ This Is ‘Irreversible’ (Video)