Posted on January 7, 2018 by ifnm| Comments Off on Ben Stein Says California Is Flirting With Civil War Over Sanctuary State Status (Video)

Ben Stein was recently on the Neil Cavuto show to discuss California’s decision to become a sanctuary state. He claimed that the state is coming dangerously close to the makings of civil war for defying federal law. 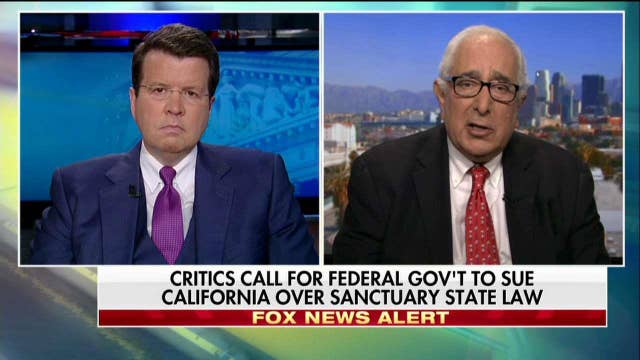 Economist and actor Ben Stein said California is flirting with “civil war” against the rest of the United States over its refusal to enforce federal immigration policies.

Stein reacted to comments Acting ICE Director Thomas Homan made on “Your World” earlier in the week, in which Homan said citizens will die and Gov. Jerry Brown (D-Calif.) is likely violating federal law by enacting a “sanctuary state” policy.

Brexit Was Sparked by Rape and Crime by Ben Stein

Posted on June 26, 2016 by ifnm| Comments Off on Brexit Was Sparked by Rape and Crime by Ben Stein

That’s what the PC media would rather ignore.

“The Battle of Waterloo was won on the playing fields of Eton.” So supposedly said the Iron Duke of Wellington, referring, of course to the crushing defeat of Napoleon by the Allies on an 1815 Belgian battlefield and the rousing competitive spirit of the British ruling class, officers in the Royal Army. That spirit was said to have been instilled in them by the games playing at one of the premier English “public” schools, by which we would mean boarding schools.

May I add, “The Battle of Brexit, Britain, and Brussels was lost by Europe on the playing fields and in the alleys and immigrant housing of the British town of Rotherham.” There, over a period of twenty years, over 1,000 British girls were assaulted, raped, held captive, gang raped by Muslim immigrants to the UK, especially from Middle Eastern countries and Pakistan. It was a stupendous scandal, apparently duplicated all over Britain on a greater or lesser scale.

It has also been duplicated and then some in Sweden. In the wake of a decision about ten years ago that allowed about 1.5 million Middle Easterners and Somalis into Sweden, Stockholm’s rape rate has gone up by a factor of about fifteen. Most of it has come from these immigrants and their sons.

Not all, but a lot of white and Asian Europeans are sick of it. They don’t want any more immigrants. They’re done with Political Correctness. They’re sick of taking in refugees and seeing their good deeds go paid with rape.

Ben Stein: “I Have Not Heard A Racist Word” Out Of Donald Trump’s Mouth (Video)

Posted on March 27, 2016 by ifnm| Comments Off on Ben Stein: “I Have Not Heard A Racist Word” Out Of Donald Trump’s Mouth (Video)

Stein: Trump Is “Not A Ranting, Blubbering, Fool, He’s Making A Lot Of Sense, And I Don’t See What’s Anti-Democratic About Him”

BEN STEIN: People talk about Trump as if he’s some sort of lunatic. What he’s saying makes a lot of sense.

NEIL CAVUTO (HOST): But it bothers a lot of folks who say — even in the Republican Party, Ben, that he might be alienating Latino voters who he seems to be targeting. He says no, he’s just talking about illegals. It’s very clear in his statements and press releases that’s exactly what he is saying, but it’s sort of been morphed together, as sort of an anti-Hispanic rant. What do you say?

STEIN: [INAUDIBLE] Morphed together by the Democratic establishment. There’s so much talk about the Republican establishment, and I don’t even know who is in the Republican establishment. I would think I would be, by virtue of age and the fact that both my father and grandfather were fairly prominent Republicans. But, what I’m looking at here is the Democratic establishment, is the one trying to cut off debate, trying to keep Mr. Trump from speaking. I don’t think there’s ever been a case before where a major political party in the US has had, on a systematic basis, an attempt to silence the other party’s leading presidential candidate. That is an outrage. That is the real anti-Democratic thing that is going on here. It’s not Trump, who is the anti-democratic here, it is the other side. My old childhood next door neighbor, dear friend Carl Bernstein, obviously on very different sides of the fence politically, says Mr. Trump is a neo-fascist. He’s the exact opposite of a neo-fascist. He wants government of, by, and for the people. It’s the other side trying to shout him down, and have government by a screaming, un-elected elite.

Comments Off on Ben Stein: “I Have Not Heard A Racist Word” Out Of Donald Trump’s Mouth (Video)

Posted on January 18, 2016 by ifnm| Comments Off on Counting My Blessings – Ben Stein’s Diary

Lots of golf. Lots of hanging out with billionaires. Lots of ultra-expensive trips for Michelle and the lovely daughters. But a nonstop tour to plead with gangs to put away the Glock? Did you ever even consider that?

Tuesday night I made the huge mistake of watching Mr. Obama’s State of the Union address. He said that except for gun violence here at home, everything is great.

The man is thoroughly delusional. Really?

At least 80 percent of the black eighth graders in Chicago cannot read. Same with math. Black gang members are killing each other and their neighbors at the rate of at least (at the very least) 100 per week. Mr. Obama, sir, that’s where the gun violence is coming from in majority measure. Why, Mr. Obama, do you NEVER mention gang violence? Why do you never mention the collapse of the black family? Why do you never mention the disaster of young black men killing each other over a few words shouted from a passing car?

Why do you never mention that blacks commit roughly 40 percent of felony crimes in the U.S. for which prison is required and are only 13 per cent of the population?

You are a black man. The nation looked to you as an example of black success and hoped you would be mentor to the black population. You are missing in action.

Comments Off on Counting My Blessings – Ben Stein’s Diary

Posted on November 18, 2015 by ifnm| Comments Off on Ben Stein: Obama ‘Has a Real Strong Hatred of America’ (Video)

“He’s a very real danger. Well, I’m very interested in psychology I’m very interest in psychoanalysis. I guess I probably should have been a psychologist. I think the question is, why is he so angry at America? I don’t think there’s much question that he does not wish America well.”

Stein said, “Mr. Obama has been wrong from day one about ISIS. He called them a JV team, he said that they weren’t really serious or important. He has not in any sense addressed their threat. And he is a bad joke, as the leader of the most important nation in the world, he’s a bad joke.”

Comments Off on Ben Stein: Obama ‘Has a Real Strong Hatred of America’ (Video)

Posted on September 24, 2015 by ifnm| Comments Off on Malzberg – Brigitte Gabriel on the latest from the Islamic terror war (Video)

President of ActForAmerica, and Author of “They Must be Stopped” joins Dennis on the latest from the Islamic terror war and Ben Carson “Muslim” controversy.

Thursday on Newsmax TV’s “The Steve Malzberg Show” author and former speechwriter for Presidents Nixon and Ford, Ben Stein, said “political correctness,” causing the banning of the Confederate flag from even being sold is how totalitarian societies begin.

While he agreed with removing the flag from public buildings, Stein said “I don’t understand why private people shouldn’t be allowed to buy it.”

“Amazon no longer sells anything with a Confederate flag—up until just a couple days or hours ago, they did. In a kind of Orwellian twist, overnight they disappeared. They are just not there anymore. What harm is it to anyone for one individual person to have a flag as his blanket or his quilt or a throw pillow? What harm does that do?” he said. “That’s just plain crazy. This is how totalitarian dictatorships start is with tormenting people about supposedly righteous causes and the turning into, as I say, totalitarian dictatorships.”

Posted on May 19, 2015 by ifnm| Comments Off on Ben Stein: Hillary Clinton Hasn’t Accomplished Anything in Her Life (Video)

He continued, “Absolutely nothing to do with achievement, she no achievements whatsoever. That being said, I was her school mate at Yale Law School and I wear the old school tie sometimes on her behalf. But she accomplished nothing.”

During Sunday’s “America’s News HQ” on Fox News Channel, economist and author Ben Stein appeared as a guest to discuss former Yale schoolmate Hillary Clinton and her campaign as a champion of the middle class.

According to Stein, Clinton’s campaign is a lie because she has never accomplished anything in her life.

“She hasn’t accomplished anything in her life. That’s the thing. She married the wizard campaigning of all time, he made her first lady. The fact that she was his first lady made her senator from New York. She was secretary of state for four years, she accomplished nothing, absolutely nothing. Traveled one million miles.”

Comments Off on Ben Stein: Hillary Clinton Hasn’t Accomplished Anything in Her Life (Video)

Posted on February 12, 2015 by ifnm| Comments Off on Ben Shapiro: Why Jews Vote Leftist? (Video)

Ben Shapiro takes a clear-eyed look at why American Jews vote with the anti-Israel Left.

Comments Off on Ben Shapiro: Why Jews Vote Leftist? (Video)

Posted on February 5, 2015 by ifnm| Comments Off on Ben Stein: Farrakhan Friendship Is Why Obama Won’t Call Terrorists Islamic (Video)

Tuesday on Newsmax TV’s “The Steve Malzberg Show,” Ben Stein, a comedic writer and former speechwriter for Presidents Richard Nixon and Gerald Ford, said President Barack Obama refuses to call terrorists, like ISIS and al Qaeda, “Islamic” because of his friendship and Chicago political history with Louis Farrakhan, the leader of the Nation of Islam.