Posted on January 22, 2021 by ifnm| Comments Off on Kid Rock Has A Message For ‘Far Left Socialist Liberals’ And ‘Media’ Who Want To Deprogram Trump Supporters

Kid Rock told the “far left socialist liberals” and “media” who want to deprogram supporters of former President Donald Trump what they could do with that plan.

“Just to be clear and follow up…,” the 50-year-old singer tweeted Thursday to his hundreds of thousands of followers.

“THESE FAR LEFT SOCIALIST LIBERALS AND MEDIA CAN DE-PROGRAM DEEZ NUTZ!!,” he added. “Everyone else, have a great weekend!-Kid Rock.”

In the tweet, he included a meme of himself running with a message that read, “Headed to deprogramming to woop some ass.”

For Some reason I feel compelled to speak my mind on this…. by Kid Rock

Posted on October 7, 2017 by ifnm| Comments Off on For Some reason I feel compelled to speak my mind on this…. by Kid Rock

“Most of us in the entertainment business have heard of these disgusting stories for years about these scumbag heads of studios, record labels, Fortune 500 companies, etc and how they prey on young women and men, especially in Hollywood, where most show up with stars in their eyes and are viewed / treated as nothing more than a toy by many of these assholes.”

I do not know all the women who have come forward per the New York Times piece on Harvey Weinstein and I am not a fan of many of them, in many ways, especially of their politics (I am certain they are not too fond of me or mine as well!). But I applaud their courage to come forward and support them all 100%. […] I do not want to condemn all – I know there are good people in Hollywood, but I do condemn a great deal of these folks, especially the ones who know about this stuff first hand and have stayed silent for so many years or turned a blind eye. It is no secret Hollywood has a don’t ask, don’t tell policy if you wanna work, and the same goes for their views and opinions of how this country and the world should work. The public knows at this point that these people also have big time publicists and lawyers who can sway the narrative, but the majority of us Americans do not buy your bullshit anymore. Best of luck to you victims and know that even though we do not see eye to eye on most things, folks like me still support, care and admire your courage to speak out. I hope Harvey gets the help he seeks, but I do not buy any of it at this point as I believe he is only going down this path because he cannot cover his own shit up any longer.

Why even comment on this and put my own neck out there in a fight that’s not mine?

For my granddaughter, my sisters, my mother, my fiancé, but mostly for the people who have no voice. And I am also not beholden or scared of anyone!

Comments Off on For Some reason I feel compelled to speak my mind on this…. by Kid Rock

Rockstar Kid Rock set off a political firestorm after teasing his Twitter followers about a potential Senate run in Michigan. News broke this weekend that Kid Rock is LEADING challenger, Dem Debbie Stabenow in a new poll 30% to 26%!

I have had a ton of emails and texts asking me if this website is real… https://t.co/RRVgISDFeq The answer is an absolute YES. pic.twitter.com/uYCUg6mjW1

Days later, Kid Rock tweeted out a ‘manifesto’ to his followers, laying out his political believes in a short graphic.

“I believe if you work your butt off and pay taxes, you should be able to easily understand and navigate the laws, tax codes, health care and anything else the government puts in place that affects us all.”

According to a new poll, Kid Rock is leading in a hypothetical match-up against challenger, Debbie Stabenow.

On July 12th, 2017 Robert Ritchie, aka Kid Rock, confirmed his intention to run for the United States Senate seat in Michigan. His announcement sent a shock through the media and many dismissed it as a cheap publicity stunt. While Ritchie has yet to file his official documentation to seek the office, he stated his intentions on Twitter and pushed back at his critics, saying “the press is wrong.”

‘If You Work Your Butt Off and Pay Taxes…’: Kid Rock Offers Senate Platform (Video)

Posted on July 18, 2017 by ifnm| Comments Off on ‘If You Work Your Butt Off and Pay Taxes…’: Kid Rock Offers Senate Platform (Video)

“I believe if you work your butt off and pay taxes, you should be able to easily understand and navigate the laws, tax codes, health care and anything else the government puts in place that affects us all,” he wrote above a link to his website.

Music icon Kid Rock appeared to solidify his decision to “try a different thing” in a tweet that explained the basics of the platform for his Senate bid.

Last week, in a lengthy social media post, the “All Summer Long” singer blasted critics who saw his announcement that he will seek Sen. Debbie Stabenow’s (D-Mich.) seat as a joke and a publicity stunt.

On Monday afternoon, he followed that post with one that laid out what appeared to be his initial platform.

Comments Off on ‘If You Work Your Butt Off and Pay Taxes…’: Kid Rock Offers Senate Platform (Video)

Posted on July 13, 2017 by ifnm| Comments Off on Kid Rock Running For Senate In Michigan

Ritchie, who in the past has described himself as a Libertarian, and has often expressed right-leaning views. He strongly supported Donald Trump his 2016 presidential run, while Trump seems to have set the stage for more U.S. celebrities to seek high office. 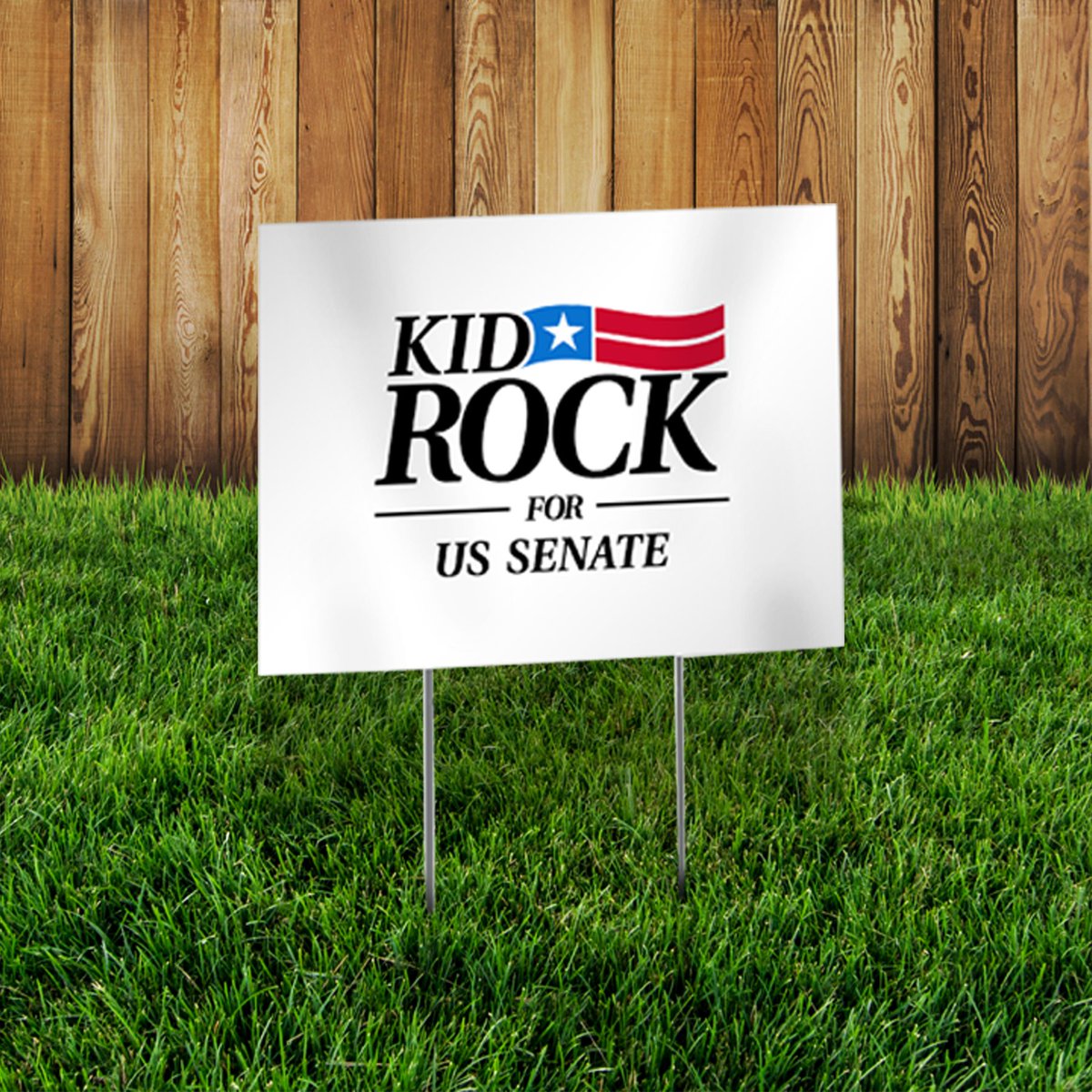 Kid Rock is running for a U.S. Senate seat in Michigan.

The Michigan-native musician, whose real name is Robert Ritchie, appeared to confirm long-running rumors and speculation in a tweet on Wednesday.

“I have had a ton of emails and texts asking me if this website is real… http://kidrockforsenate.com The answer is an absolute YES.”

I have had a ton of emails and texts asking me if this website is real… https://t.co/RRVgISDFeq The answer is an absolute YES. pic.twitter.com/uYCUg6mjW1

The 46-year-old singer, songwriter, rapper and producer later tweeted a follow-up teasing “a major announcement in the near future,” which promises to reveal more details.

Comments Off on Kid Rock Running For Senate In Michigan

From the album “First Kiss”.

Posted on December 7, 2016 by ifnm| Comments Off on Kid Rock Takes Heat for Line of Pro-Donald Trump Merchandise

Kid Rock has released a line of pro-Donald Trump merchandise that has sent some offended social media users into a frenzy. Another pro-Trump shirt from the singer’s store reads “_onald Trump,” with the sub-heading: “The ‘D’ is missing because it’s in every hater’s mouth.”

A note next to the items on the official Warner Bros. merchandise store includes a disclaimer citing “overwhelming demand” as the reason why they “actually made” the shirts. Posts featuring the singer in photoshopped pro-Trump t-shirts had gone viral on social media before the shirts were actually manufactured.

While some applauded the musician’s latest move, other weren’t as thrilled with the new merchandise.

Posted on August 13, 2016 by ifnm| Comments Off on Kid Rock with Lynyrd Skynyrd – All Summer Long & Sweet Home Alabama

Posted on July 10, 2016 by ifnm| Comments Off on Lynyrd Skynyrd, Springfield to play Trump convention sidelines

Right-leaning rockers Lynyrd Skynyrd, Kid Rock and Rick Springfield will be among performers in Cleveland on the sidelines of this month’s Republican convention. A coalition of promoters, consultants and charitable groups on Friday announced the concerts at venues in Cleveland, where Republicans are expected to nominate billionaire Donald Trump as their presidential candidate.

“It’s a very exciting time to be a Republican, and this is where politics, policy and entertainment collide,” the organizers said in a statement.

Lynyrd Skynyrd, the Southern rockers best known for the 1974 song “Sweet Home Alabama,” and metal-rap fusionist Kid Rock will play concerts in Cleveland that will raise money for veterans.

Springfield and country stars The Band Perry will play separate shows in honor of the Republican leadership in the House of Representatives.

Springfield, best known for his 1981 hit “Jessie’s Girl,” was born in Australia but became a US citizen and avowed Republican after the September 11, 2001 attacks on the United States.

The events are not officially tied to the Republican convention, which will likely have its own entertainment with Trump vowing to bring some showbiz pizzazz to the gathering.