China is not the 2nd richest country in the world. It’s not even close. People are getting lost in the propaganda. China is still largely, a very poor country, and the Chinese government is doing their own people a massive disservice by trying to pretend the poor people don’t exist.

Comments Off on China is Still Very Poor – Don’t be Fooled! (Video)

Homeless Camps Are Taking Over the West Coast

Posted on May 10, 2021 by ifnm| Comments Off on Homeless Camps Are Taking Over the West Coast

You Get What You Vote For: Zombies!

Democrat cities have allowed hundreds of homeless encampments to pop up along the West Coast.

Homelessness isn’t new to places like San Francisco, L.A., Seattle, Sacramento, and so on. I was in Portland 12 years ago for a comedy gig. The park in front of the club looked like a scene from Michael Jackson’s Thriller video. Today it looks like the Walking Dead.

Homeless camps are popping up all over the West Coast and bringing violence, drugs, weapons, and defecation with them. When I was a kid, camping meant fishing and catching toads, not getting shot and stepping in people poop.

Los Angeles has seen a 50% increase in homelessness over the last five years. LA’s Venice Beach homeless encampment recently had an explosion and a shooting. The question city officials are asking: where did they find the ammo?

Comments Off on Homeless Camps Are Taking Over the West Coast

Dancing with the dead: Venezuelans turn to desperate measures to survive (Video) (2018)

Posted on March 31, 2021 by ifnm| Comments Off on Dancing with the dead: Venezuelans turn to desperate measures to survive (Video) (2018)

Venezuela is facing the worst economic crisis in its history. For those who live in the capital Caracas, daily life is about survival. Public services are barely able to function, the welfare state nothing but a distant memory. Violent crime is on the rise, while prisons are full. From the hospital to the morgue and the cemetery, FRANCE 24’s reporters show you the harsh reality of life in Caracas, where extreme poverty means people are turning to desperate measures to get by.

Comments Off on Dancing with the dead: Venezuelans turn to desperate measures to survive (Video) (2018)

“Irish people left to freeze and starve on the streets of Dublin.” (Video)

Posted on March 21, 2021 by ifnm| Comments Off on “Irish people left to freeze and starve on the streets of Dublin.” (Video)

Philip Dwyer, National Party representative for Dublin South West, and party activists Martin Boylan and Cody McGrath were out again last night to try give what help they can to the homeless on the streets of Dublin. Join the National Party: http://www.nationalparty.ie/join

Comments Off on “Irish people left to freeze and starve on the streets of Dublin.” (Video)

Posted on March 15, 2021 by ifnm| Comments Off on Video: Inside Venezuelan Slum at Brazil Border (harsh conditions)

Comments Off on Video: Inside Venezuelan Slum at Brazil Border (harsh conditions)

Poor white teens in ‘left behind’ towns not going to uni

Posted on February 2, 2021 by ifnm| Comments Off on Poor white teens in ‘left behind’ towns not going to uni

Poor white teenagers in England’s former industrial towns and those living on the coast are among the least likely to go to university, warns the watchdog for fair access.

“These are the people and places that have been left behind,” says Chris Millward of the Office for Students.

The watchdog has used a new measure to see which groups are likely or not to go to university.

The Office for Students looked at overlapping factors – such as poverty, race, gender and where people live – which are indicators of whether someone is likely to go to university.

If Immigration Creates Wealth, Why Is California America’s Poverty Capital?

Posted on February 23, 2018 by ifnm| Comments Off on If Immigration Creates Wealth, Why Is California America’s Poverty Capital?

California became a Democratic stronghold not because Californians became socialists, but because millions of socialists moved there. Immigration turned California blue, and immigration is ultimately to blame for California’s high poverty level.

California used to be home to America’s largest and most affluent middle class. Today, it is America’s poverty capital. What went wrong? In a word: immigration.

According to the U.S. Census Bureau’s Official Poverty Measure, California’s poverty rate hovers around 15 percent. But this figure is misleading: the Census Bureau measures poverty relative to a uniform national standard, which doesn’t account for differences in living costs between states – the cost of taxes, housing, and health care are higher in California than in Oklahoma, for example. Accounting for these differences reveals that California’s real poverty rate is 20.6 percent – the highest in America, and nearly twice the national average of 12.7 percent.

Likewise, income inequality in California is the second-highest in America, behind only New York. In fact, if California were an independent country, it would be the 17th most unequal country on Earth, nestled comfortably between Honduras and Guatemala. Mexico is slightly more egalitarian. California is far more unequal than the “social democracies” it emulates: Canada is the 111th most unequal nation, while Norway is far down the list at number 153 (out of 176 countries). In terms of income inequality, California has more in common with banana republics than other “social democracies.”

Comments Off on If Immigration Creates Wealth, Why Is California America’s Poverty Capital?

One veteran rail designer who works on the high-speed rail project said it has created “a linear ghetto.”

Charlene Hook cherished her home of 30 years north of Corcoran, where pomegranate and pistachio orchards stretched for miles. So choosing to burn it down last year was a difficult decision.

She and her husband had no plans to leave their 2½ acres until the day the state bullet train authority said its rails would go through their bedroom.

Not long after the couple moved out, thieves broke into the house and stripped almost everything of value — even taking the doors off her husband’s shop where he restored classic cars. Soon her former longtime neighbor’s homes were being burglarized and vandalized.

After all the frustration of losing her home and indignation of it attracting criminals to her old neighborhood, she convinced her brother-in-law, a battalion chief in the city fire department, to burn it down for firefighting practice — and to let her light the match.

“It was hard to burn down,” she said. “I thought it would bring me closure.”

What happened to Hook is a part of a painful spectacle up and down the Central Valley. The California High-Speed Rail Authority now owns more than 1,272 parcels stretching from Madera to south of Wasco, a 119-mile corridor of abandoned commercial buildings, vacant lots, dying orchards, boarded up homes and construction sites.

L.A.’s homelessness surged 75% in six years. Here’s why the crisis has been decades in the making (Video)

Posted on February 2, 2018 by ifnm| Comments Off on L.A.’s homelessness surged 75% in six years. Here’s why the crisis has been decades in the making (Video)

People in Koreatown step outside their fancy condos to find tents, rotting food and human feces at their doorsteps. Buses and trains have become de facto shelters, and thousands of people sleep in fear and degradation. 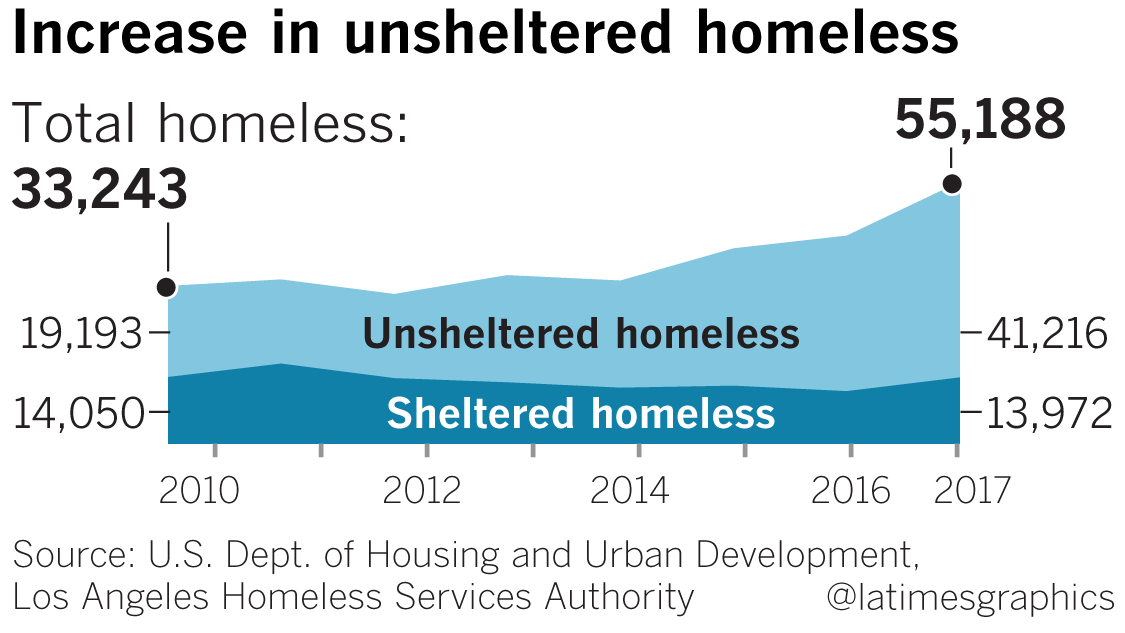 Some of the poorest people in the city spend their days in the shadow of Los Angeles City Hall, napping on flattened cardboard boxes.

On any given day, as many as 20 people take to the City Hall lawn, across the street from LAPD headquarters. They’re there to “escape the madness” in downtown streets, a 53-year-old homeless man named Lazarus said last week. At night, they fan out to doorways or deserted plazas to wait for daybreak.

The growth of a homeless day camp at the halls of civic power speaks to the breadth of Los Angeles’ burgeoning homelessness problem.

The number of those living in the streets and shelters of the city of L.A. and most of the county surged 75% — to roughly 55,000 from about 32,000 — in the last six years. (Including Glendale, Pasadena and Long Beach, which conduct their own homeless counts, the total is nearly 58,000.)

Comments Off on L.A.’s homelessness surged 75% in six years. Here’s why the crisis has been decades in the making (Video)

Posted on January 20, 2018 by ifnm| Comments Off on Left Coast Dilemma: Why California Ranks #1 In Poverty – Ron Paul (Video)

Government creates nothing, but it does destroy. The Left Coast is famous for its reverence for government interference into all aspects of life. The results should surprise no one. California has the highest poverty rate in the nation. Why? What’s the way out? And what are the chances that Californians will choose the way out? 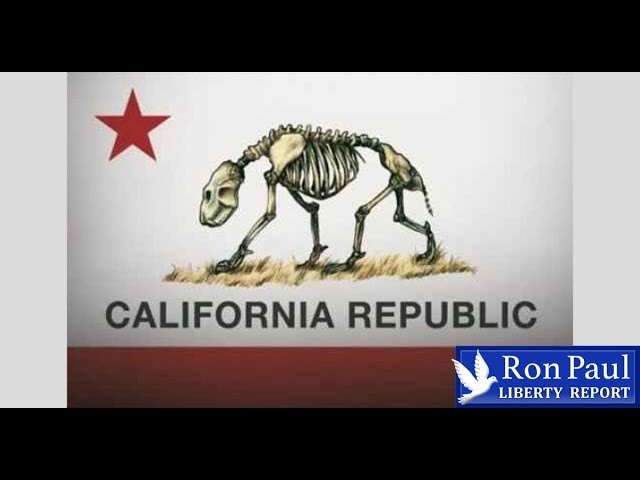