… How China BOUGHT the World…

Posted on January 4, 2020 by ifnm| Comments Off on … How China BOUGHT the World…

We don’t need no stinkin laws.

Comments Off on … How China BOUGHT the World…

Video: Hawaii and the Tanager Expedition of 1923

Posted on October 7, 2019 by ifnm| Comments Off on Video: Hawaii and the Tanager Expedition of 1923

When Theodore Roosevelt created the Hawaiian Islands reserve for the protection of native birds, the expansive Northwestern Hawaiian island had not been the subject of a systematic scientific inquiry. The expeditions aboard the USS Tanager changed our understanding of some of the nation’s most remote territories. It is history that deserves to be remembered.

Comments Off on Video: Hawaii and the Tanager Expedition of 1923

The Corrupt Politics of Low-Income Housing

Posted on January 17, 2018 by ifnm| Comments Off on The Corrupt Politics of Low-Income Housing

State officials gleefully line their own pockets at taxpayers’ expense.

The rent is too damn high—so each year Congress appropriates billions of dollars to address the nation’s collective housing needs. The programs vary from loans to tax credits to straight-up subsidies, but a common feature is that federal taxpayers pony up the dough and then a motley collection of state-level politicians, financing agencies, and housing authorities decide how it’s spent. Can you guess where things go wrong?

In theory, oversight is provided by bureaucrats in Washington tracking every dollar and by local leaders increasing their re-election prospects by providing housing assistance to their constituents as effectively as possible. In practice, the feds turn a blind eye to inefficient uses of the funds while local officials gleefully engage in politically advantageous graft.

Take California Treasurer John Chiang. By virtue of his position on the three-member California Tax Credit Allocation Committee, Chiang exercises enormous influence over who gets $94.9 million each year in federal tax credits intended for developers of low-income housing.

Comments Off on The Corrupt Politics of Low-Income Housing

Posted on December 29, 2017 by ifnm| Comments Off on California’s hidden homeless: Teachers, chefs, nurses and other middle class workers living in cars in parking lots because of the state’s crazy property prices

Hundreds of people are sleeping in parking lots in areas like Santa Barbara. Rising cost of rent and housing has forced middle class workers to take up residence in their cars to make ends meet. Most of those sleeping rough in cars are part of the area’s Safe Parking program. It is run by the New Beginnings Counseling Center and aims to provide a secure area for the homeless to sleep in their vehicle. The rising cost of rent and housing in California is forcing residents into alternative accommodation with middle class workers taking up residence in their cars and RVs by the side of the road to make ends meet.

Hundreds of people, including nurses and chefs, are sleeping in parking lots in affluent areas like Santa Barbara as they make the most of the only homes they can afford.

Marva Ericson, who works as a nursing assistant, has been sleeping in her Kia for the past three months. She wakes up before dawn each day, showers at the local YMCA and dresses in her hospital scrubs to head to work.

‘I wake up and I say, ‘Thank you God for keeping me safe last night, and thank you for the Safe Parking program’,’ the 48-year-old told the LA Times.

Like Ericson, most of the people sleeping rough in their cars are part of the area’s Safe Parking program, which is run by the New Beginnings Counseling Center and aims to provide a secure area for the homeless to sleep in their vehicles.

Comments Off on California’s hidden homeless: Teachers, chefs, nurses and other middle class workers living in cars in parking lots because of the state’s crazy property prices

Posted on December 24, 2017 by ifnm| Comments Off on Young Britons ‘Paying The Price’ for Decade of Mass Migration, Housing Crisis Report Finds

A new report has revealed the extent to which Britain’s housing crisis has been driven by mass immigration, with young people “paying the price” for this policy through ever-rising rents. Migration Watch UK found that the “unprecedented” net migration of 2.5 million people over the past decade has been one of the main factors in pricing young people out of the UK housing market.

Published Thursday, the paper found that mass migration is the “major component” fueling the heavy demand on housing that has sent rent prices sky-high and made it hard for Britain’s young to save for a house deposit.

Migrant families make up nine out of 10 new households added in the last decade, according to the think tank which reported that “London is bearing the brunt of ballooning demand for rental properties.”

Households headed by foreigners accounted for more than 80 per cent of growth in the UK capital’s private-rented sector over the past 10 years, a period in which the report says rents rose by 36 per cent while wages grew just 21 per cent. Comments Off on Mexico promised affordable housing for all. Instead it created many rapidly decaying slums

Of the 56 percent of voters who said they’ve considered moving, 1 in 4 said they’d relocate out of state if they did.

More than half of California voters say the state’s housing affordability crisis is so bad that they’ve considered moving, and 60 percent of the electorate supports rent control, according to a new statewide poll.

The findings from UC Berkeley’s Institute of Governmental Studies reflect broad concerns Californians have over the soaring cost of living. Amid an unprecedented housing shortage, rents have skyrocketed and tenants have faced mass evictions, especially in desirable areas.

“It’s an extremely serious problem,” said poll director Mark DiCamillo. “People are being forced to consider moving because of the rising cost of housing – that’s pretty prevalent all over the state.”

Posted on August 19, 2017 by ifnm| Comments Off on HUD Director Goes on $336,000 Shopping Spree with Low-Income Housing Funds

Fraud and corruption has also been pervasive among HUD employees and field directors. A high-ranking public housing official charged with providing government-subsidized homes to the poor stole hundreds of thousands of dollars from the agency and used it to buy furniture, alcohol, clothes, makeup and other personal items. The crooked public official scammed the government for years undetected which may seem unbelievable though not when it comes to the agency she worked for, a bastion of corruption known as Housing and Urban Development (HUD).

This is an agency that’s been embroiled in a multitude of serious scandals—under both Democrat and Republican administrations—over the years. One veteran employee at a state branch stealing a few hundred thousand bucks to go on a marathon shopping spree is no biggie. Problems go back to the Ronald Reagan administration, when an influence-peddling scandal led to the conviction of 16 people, including top aides to then HUD Secretary Samuel Pierce. Bill Clinton’s housing secretary, Henry Cisneros, pleaded guilty to lying to the FBI about payments to his former mistress. George W. Bush’s HUD secretary, Alphonso Jackson, was ousted after the feds launched an investigation into his plots to enrich himself and his friends by giving them lucrative government contracts. Barack Obama’s second HUD secretary, Julian Castro, misspent the agency’s federal funds as mayor of San Antonio.

Comments Off on HUD Director Goes on $336,000 Shopping Spree with Low-Income Housing Funds Carlson noted that Waters, a politician for 40 years, lives in a 6,000 square-foot mansion worth $4.3 million that is not even in her congressional district, saying that “almost qualifies her to be HUD Secretary herself.”

“[W]aters is a confirmed expert on the question of housing, especially her own housing,” Carlson stated. “Consider where she lives, in a 6,000 square foot, $4.3 million mansion in one of the wealthiest neighborhoods in Los Angeles. Now, how did she afford a place like that after having spent the last 40 years working in government? We hate to speculate. How did she keep getting reelected despite not living in her own Congressional district? No clue there either. The district Waters actually represents in Congress has the second-highest percentage of African-American residents in the state of California.”

He continued, “Now, the neighborhood where Waters actually lives is just six percent black or, as she might put it herself if she didn’t live there, it is segregated — like 1950s level segregated. And as we’ve mentioned, it is really, really rich. So, how did Maxine Waters pull off a housing coup like that, who knows, but it almost qualifies her to be HUD Secretary herself.”

The Secret History of the 21st Century

Posted on June 15, 2017 by ifnm| Comments Off on The Secret History of the 21st Century 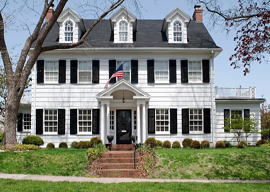 The insightful blogger who goes by the moniker Spotted Toad has created a series of charts explaining the 2016 Electoral College results as a result of average home price in each state.

For example, the state with the most expensive homes on average is Hawaii, at a self-estimated mean during 2010–14 of $505,400 (according to Census Bureau data). Not coincidentally, Donald Trump did worse in Hawaii than in any other state, garnering only 30.0 percent of the vote.

In contrast, in the state with the cheapest housing—West Virginia, with its mean home value of just $100,200—Trump enjoyed his biggest majority: 68.5 percent.

These aren’t fluke outliers, either.

Comments Off on The Secret History of the 21st Century