The Long History of Mexican-American Radicalism

Posted on November 20, 2021 by ifnm| Comments Off on The Long History of Mexican-American Radicalism

Mexican-American workers have a long tradition of radical organizing, stretching back to the days of the Industrial Workers of the World and the mid-century Communist Party. And in 1968, with a longtime Communist Chicano family at the center, Mexican-American students in LA launched the largest student walkout in US history.

During the first week of March in 1968, more than fifteen thousand students walked out of their high schools in Los Angeles, kicking off the largest student walkout in US history. The students, mostly Mexican Americans, were fed up with a school system that had given them de facto segregation, English-only instruction, and irrelevant curricula. The walkout, coordinated by student committees at each school, demanded more Latino faculty members, better facilities, and educational material that spoke to Mexican Americans’ diverse experience.

An East LA family named the Cuaróns were at the center of the walkout. Even before the events of March ’68, the Cuarón home had served as a meeting place for radicals. Mita Cuarón was a student at Garfield High School, so involved in organizing the walkout that the administration singled her out as a leader and school guards attacked her. Mita’s mother, Sylvia Cuarón, was one of the first parents down on the picket line to help support and protect the striking students. And her father, Ralph Cuarón, was elected as the students’ representative in subsequent negotiations with school administrators.

Comments Off on The Long History of Mexican-American Radicalism

Posted on July 7, 2021 by ifnm| Comments Off on Radical leftists call for armed confrontation for any state that enforces borders

LULAC’s Wikipedia page notes that the group, like the Cesar Chavez United Farmworkers, originally opposed illegal immigration. Now they’ve switched, and seem to be doing the cartels’ bidding. Something funny happened to them.

As states pursue rule of law at the border amid a record surge of illegal migrants and Biden administration inaction, open border activists are getting busy.

According to The Last Refuge/Conservative Treehouse:

Several states responded to the call from Texas Governor Greg Abbott asking for allied states to send law enforcement and national guard to secure the southern border after the Biden administration actively, intentionally and purposefully works to keep it open.

With the potential for cooperation from states, what I call “extreme federalism“, to secure the border regardless of the Federal inaction, an assembly of various activist groups are petitioning the White House to confront the states with direct military action.

The League of United Latin American Citizens (LULAC), a far-left communist advance group, is asking Joe Biden to fight the state effort with all measures possible, including armed confrontation.

Biden Puts Specialist in Illegal Aliens in Charge of Census

Posted on April 21, 2021 by ifnm| Comments Off on Biden Puts Specialist in Illegal Aliens in Charge of Census

And a member of a racist hate group that wanted to build Mexico in America.

The media is touting Biden’s pick of Robert Santos as historic because he would be the first “census director of color”. Emphasizing the race or ethnicity of Biden’s nominees has become the media’s usual tactic for obscuring their radicalism while accusing their critics of racism.

As a third-generation American whose grandparents came to this country over a century ago, whose parents raised him not to speak Spanish, Santos is hardly an oppressed minority.

During the census, the media repeatedly trotted Santos out to warn that minorities would be undercounted and that the citizenship question would suppress minority participation.

“If the administration tries to take out undocumented folks, that’s going to lead to lot of litigation,” Santos warned.

UCR Professor Predicts a Marxist Future and leads with Grant for $2.9 million for ‘Latinx Futures’ (Video)

Posted on February 15, 2021 by ifnm| Comments Off on UCR Professor Predicts a Marxist Future and leads with Grant for $2.9 million for ‘Latinx Futures’ (Video)

“The good thing about it is a lot of students, the younger people are hungry for it. They want it. They want to do it. They want to do that work. My generation wasn’t Marxist or left leaning but these kids are. Like their whole future in a capitalist economy is like crap and they know it.” Alfredo Carlos, Ph.D

Comments Off on UCR Professor Predicts a Marxist Future and leads with Grant for $2.9 million for ‘Latinx Futures’ (Video)

These are two excerpts from a speech made by Rodolfo “Corky” Gonzales in 1969 at UCLA, one of the four founders of the radical Chicano political movement. The “Mission” incident he talks about is apparently the famous case, in which Chicanos killed a cop in the Mission District of San Francisco in 1969. These revolutionary ideas are still taught in Chicano studies classes in universities and high schools across the nation. 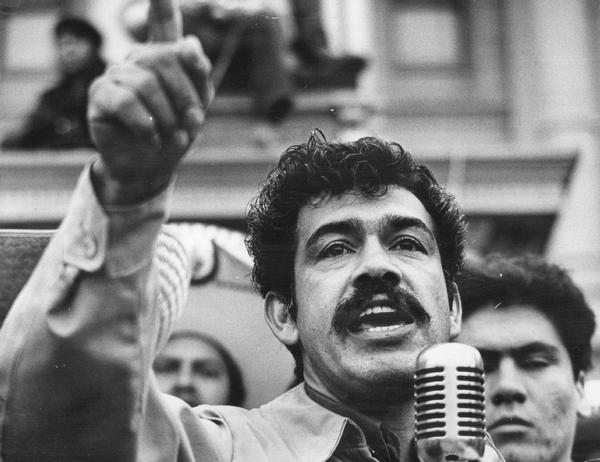 Rodolfo “Corky” Gonzales preaches nationalism for “Chicanos” in a speech at the University of California Los Angeles in 1969. This was one year before Chicano Park was occupied in San Diego and provides a good idea what the Park is about and how they feel about police. The Chicano Park Steering Committee calls it the first part of Aztlan to be occupied and they say that the domination of the rest of Aztlan will grow out of the Park. The call the Park the Ombligo (navel) of Aztlan. Gonzales was one of the four Founders of Chicano political movement.

Fidel Castro and Che Guevara are not heroes

Posted on December 31, 2017 by ifnm| Comments Off on Fidel Castro and Che Guevara are not heroes 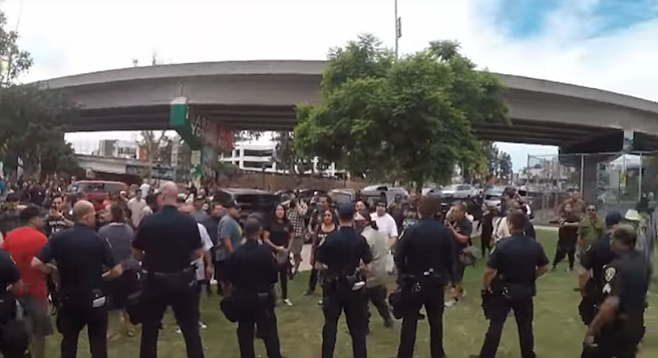 Re: “Who does Chicano Park belong to?” Neighborhood News.

An embarrassment of Chicano park and the Anti-American sentiment: I feel sad for Chicanos and immigrants who participate in this act of hostility.

Not all Mexican Americans feel this way. I grew up back in the days when Chicanos didn’t speak to immigrants. I remember taking Chicano studies and telling myself They are using my culture to present their dumb ideology of Aztlán. I see their ideology as crying over spilt milk. The Aztec Empire did the same thing.

Mexico is looking toward a better tomorrow. Chicanos need to get over this. Chicanos go into Mexico and violate Mexican laws and then they start crying to go back to the States for protection.

Not all Mexican Americans are anti-American. I was born in Mexico and grew up in L.A. I thank this country for allowing me to be part of it. The USA and Mexico both have dark histories. We don’t like it, but we learn not to repeat them. Fidel Castro and Che Guevara are not heroes — people need to read about them. The murals are beautiful, but when it gets political it’s wrong.

Comments Off on Fidel Castro and Che Guevara are not heroes

Chicano Park is not welcoming

Posted on December 2, 2017 by ifnm| Comments Off on Chicano Park is not welcoming

A reader thinks the murals are hostile and divisive.

I am a mixed-race single mother who was going to bring my 11-year-old daughter to Roger’s picnic/walking tour of the murals. I’ve taught my daughter that murals are a reflection of the community, and we had driven past Chicano Park but never actually stopped to look at it.

When I saw the Anti-American sentiment online, indicating that this might be a dangerous picnic to go to, my daughter and I attended the Padres game instead. It was Military Appreciation Day, and I knew we could be Americans there and be safe at the same time. After seeing footage of the terrorist-looking aggressors with Mexican flags that showed-up for the picnic, I was glad we had gone to the Padres game instead.

The week following Roger’s picnic my daughter and I ventured into Chicano park on our own, where we found the playground area to be updated and it seemed like a nice place to pay. I encountered one homeless man who appeared to be strung-out on drugs and saw several others lying on the grass.

Comments Off on Chicano Park is not welcoming

Toward the end of the video as the protesters are being led away by police, supporters can be heard chanting in Spanish about ‘revolution.’

Four protesters, including illegal alien adults with temporary DACA protection against deportation, briefly blocked the Macy’s Thanksgiving Day Parade in New York City Thursday morning. Police quickly removed the four red-shirt wearing protesters right after they sat down in the middle of the street. The protesters were detained but not arrested. Supporters on the sidewalk chanted, “Undocumented and unafraid!” in protest of President Donald Trump reversing the unconstitutional DACA program for illegal aliens who entered the U.S. as children enacted by former President Barack Obama after Congress refused to grant them amnesty.

The protest was organized by the pro-amnesty for illegal aliens group the Seed Project, which posted photos and statements about the protest.

Posted on November 18, 2017 by ifnm| Comments Off on Congressional Hispanic Caucus Denies Republican’s Request To Join, Remains All Democrats

“It is truly shameful the Congressional Hispanic Caucus has decided to build a wall around the organization to exclude Hispanic-Americans who aren’t registered in the Democratic Party,” Curbelo said. “This sends a powerful and harmful message of discrimination, bigotry, and division.”

The Congressional Hispanic Caucus on Thursday rejected Republican Rep. Carlos Curbelo’s (R., Fla.) request to join, despite being the son of Cuban exiles.

The caucus announced that it will not accept Curbelo into its ranks because he does not share its members’ values. Curbelo responded with a statement, in both English and Spanish, accusing the caucus of partisan bias. The body has no Republican members after retiring Rep. Ileana Ros-Lehtinen (R., Fla.) rejected an invitation and Curbelo was denied.

The caucus claims to be bipartisan but has not accepted a Republican member since 1997; Curbelo made a presentation Thursday morning to try to sway its members. After they made their decision, Curbelo likened it to de facto segregation of Hispanics but added that he still seeks to work across the aisle on issues related to the Deferred Action for Childhood Arrivals (DACA) program.