Posted on June 6, 2022 by ifnm| Comments Off on The Progressive Threat

A new Freedom Center pamphlet by David Horowitz exposes the enemy within.

Everyone in Washington understands the basic causes of inflation. If you print more money than you can back up with real assets like gold, you devalue your currency and make everything cost more. If you declare war on fossil fuels, shut down pipelines, close vast oil fields like ANWR, and don’t approve drilling licenses generally, you cause the price of everything to go up, because virtually everything requires energy to produce. If you spend vast amounts of government money inducing individuals not to work, employers will raise wages to entice them to work, and that, too, will cause prices to go up.[1]  It’s not rocket science.

Despite understanding these consequences, the Biden progressives have instituted all these inflationary measures, and avoided taking responsibility for them and the suffering they cause. They did this to advance their progressive agenda, which is really a reactionary agenda that has not changed its fundamental premises since 1848, when Marx published what is, and has always been, the basic blueprint for progressive schemes.

Comments Off on The Progressive Threat

Posted on May 25, 2022 by ifnm| Comments Off on The 20 Dumbest Hollywood Hatemongers, Part II

When Donald Trump stunned the Hollywood Left by denying Hillary Clinton a White House win in 2016, he triggered a tsunami of celebrity bile. For the next four years and after, Hollywood elitists vented their online rage at Trump, at the 63 million Americans who voted for him in 2016, and the 74 million who voted for him in 2020, smearing them as “white supremacists,” “deplorables,” and “domestic terrorists.”

“The red MAGA hat is the new white hood.”

Alyssa Milano, 49, has gone from child star in Who’s the Boss? to TV roles in Melrose Place and Charmed, to tireless activism on issues such as AIDS, health care, gun violence, abortion, and of course, the #MeToo movement, which she helped launch. A supporter of Hillary Clinton, Bernie Sanders, and Joe Biden, Milano revealed in 2019 that she had had two abortions when she was young, and she didn’t regret them because otherwise “I would not have my career.”[1]

She campaigned against the Supreme Court confirmation of Justice Brett Kavanaugh, dressing up as an oppressed Handmaid’s Tale character and urging her followers to “bang down” their senators’ doors in protest. She warned that Kavanaugh would “affect everything we know to be true as American citizens.”[2] Later she told CNN she was “filled with rage” that conservatives like Trump and Kavanaugh were “institutionalizing sexual abuse.”[3] (Perhaps she confused them with the gender-fluidity crowd in America’s K-12 school administrations.)

Comments Off on The 20 Dumbest Hollywood Hatemongers, Part II

Posted on May 24, 2021 by ifnm| Comments Off on What I Learned Being Raised by Communists (Pt. 1) | David Horowitz | POLITICS | Rubin Report (Video)

Dave Rubin of The Rubin Report talks to David Horowitz about what he learned from being raised by communists, the true cost of leaving the left, and what the real goal of the Democratic liberal agenda is. In this clip David discusses how he learned that progressives may claim to want peace and justice, but it is really an authoritarian desire to control others that drives them. He discusses how he lost all of his friends after leaving the left and how the left uses fear to prevent people from becoming apostates.

Comments Off on What I Learned Being Raised by Communists (Pt. 1) | David Horowitz | POLITICS | Rubin Report (Video)

Horowitz Exposes ‘The Enemy Within’

Posted on May 5, 2021 by ifnm| Comments Off on Horowitz Exposes ‘The Enemy Within’

America is at war. This time the enemy isn’t on some distant battlefield or hiding in a barren cave thousands of miles away. Instead the enemy is not only here, but it’s ruling over us.

That’s the powerful message of David Horowitz’s latest book, The Enemy Within: How a Totalitarian Movement is Destroying America. This isn’t just a warning, it’s the reality around us.

“Americans are more divided today than at any time since the Civil War,” Horowitz writes. “In the course of the anti-Trump wars, we have become two nations with little shared ground on the core issues that previously defined us.” And it’s the Left that brought us to this state, not just in the last five years, but going all the way back to the fundamental strategy of its divisive politics.

In The Enemy Within, Horowitz exposes the Communist roots of identity politics which have been used to turn Americans against each other and reduce them to hostile warring tribes, rather than citizens of a common nation invested in its welfare, success, and prosperity.

Comments Off on Horowitz Exposes ‘The Enemy Within’

Posted on May 1, 2021 by ifnm| Comments Off on Black Supremacy

The hate that dare not speak its name.

When a white police officer in Ohio shot and killed Ma’Khia Bryant, stopping her from plunging a butcher knife into the chest of an unarmed black teenager, the racial melodrama that is destroying the very fabric of American society reached what the “woke” refer to as an “inflection point.” At that moment, the narrative of the national lynch mob – verdict first, due process be damned – collided with an impossible reality: a white cop saving the life of a black child. Unable to resolve this dilemma, the woke mob simply refused to see it.

It was left to Black Lives Matter co-founder Patrisse Cullors to formulate their denial bluntly:

The verdict of George Floyd’s murder was a victory in accountability but not a victory towards abolition [of the police]. While we watched Derek Chauvin be convicted for murder, a Black child named Ma’Khia Bryant was murdered by police, proving there is no justice.

Comments Off on Black Supremacy

David Horowitz: The Civil War Started When Democrats Seceded From the Union in 2016

Posted on September 26, 2020 by ifnm| Comments Off on David Horowitz: The Civil War Started When Democrats Seceded From the Union in 2016

Five days after the 2016 election there was a meeting at the Mandarin Oriental, which is a very posh hotel in Washington, D.C. It was organized by George Soros and there were something like 400 people there including Nancy Pelosi, Elizabeth Warren, Soros, Bernie Sanders, the Occupy Wall Street communists, the whole range of the left. What they did is form what they called a “resistance” to Trump—you remember, 70 Democrats boycotted the inauguration. This is sedition.

Conservative legend David Horowitz, author of the new bestselling book Blitz: Trump Will Smash the Left and Win, gave me an exclusive interview on Newstalk 570 WSYR in Syracuse, where he revealed his shocking theory about the current political unrest that seems more plausible by the day as revelations about a coup attempt to remove the president are revealed.

We’re in a war. My book Blitz shows we’re already in a civil war. What the Democrats did in 2016 is what you call treason. They seceded from the Union for the second time, the first being with the election of Abraham Lincoln, which led to the shooting war. The reason we don’t have two armies in the field is that the federal government is too powerful so there’s nobody outside the government who can organize a military force that wouldn’t be crushed immediately. So the civil war is over who controls the executive.

Horowitz has a unique insight in the communist wing of the Democrat Party, having spent his youth agitating for the left and even connected to groups like the Black Panthers, a domestic terrorist organization. You can read about his transformation to conservatism in his excellent book Radical Son. When someone of Horowitz’s caliber and insight into the left speaks, we all should take what he says very seriously. He may be one of the only living witnesses to the horrors of the left’s assault on America in the ’60s through terror and infiltration. Horowitz continues to reveal that he knows where and when the Democrat secession meeting happened:

Comments Off on David Horowitz: The Civil War Started When Democrats Seceded From the Union in 2016

Posted on March 2, 2018 by ifnm| Comments Off on Saving California

Join us for our Kick-off event, Saving California! 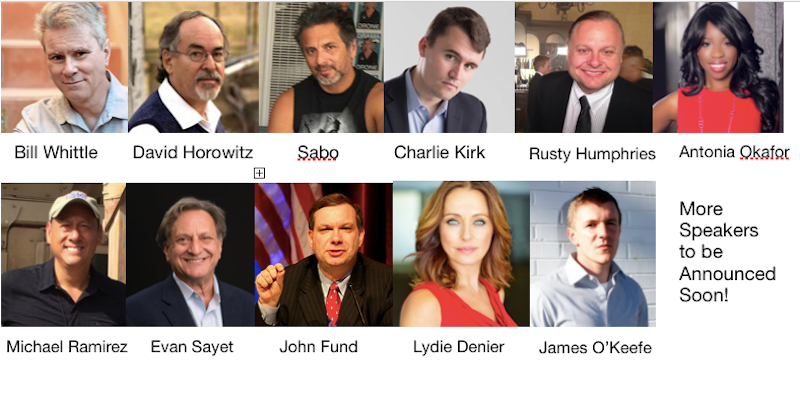 We have reached the critical Tipping Point – will you let California wither and die without a fight?

We are putting together an exclusive group for a dramatic day of Connecting, Creating and Celebrating on March 17 in Burbank. This is California’s Last Stand, and we want political insiders like you to stand with us.

*Create a roadmap for winning elections, as well as the hearts and minds of your neighbors.

Click here for more information and to purchase tickets.

Comments Off on Saving California

Posted on February 1, 2018 by ifnm| Comments Off on Second Thoughts: How Leftism Creates Conservatives (Video)

Comments Off on Second Thoughts: How Leftism Creates Conservatives (Video)

David Horowitz on the Left in the University (Video)

Posted on December 10, 2017 by ifnm| Comments Off on David Horowitz on the Left in the University (Video)

Freedom Center founder on how universities are doctrinal institutions for whom dissent is heresy.

Editor’s note: below are the video and transcript of David Horowitz’s recent lecture on the destruction of American higher education and his new book, “The Black Book of the American Left, Volume VIII: The Left in the University.” Remarks were delivered at the Luxe Sunset Boulevard Hotel in Los Angeles, CA and broadcast on C-SPAN2.

David Horowitz: Last week I was at the University of Houston in Houston, where the week before they had held a national conference for Students for Justice in Palestine. The university hosted it. Students for Justice in Palestine is a creature of the terrorist organization Hamas and is a Hamas propaganda network. I brought along a little clip to show you so you can share with me.

That was seven minutes into my talk, and I had said at the outset of the talk that when I was a radical at Berkeley and Columbia in the sixties, I always wanted to hear what the other side had to say because I felt that would make me a better radical. I would have the arguments. Those days are gone.

Posted on December 8, 2017 by ifnm| Comments Off on MILO Meets David Horowitz (Video)

From Episode 6 of The MILO Show podcast.