Bernie Sanders is Funded by the Wealthiest Zip Codes in America

Posted on February 28, 2020 by ifnm| Comments Off on Bernie Sanders is Funded by the Wealthiest Zip Codes in America

Tech industry bros and trust-fund hipsters are buying the nomination for Bernie.

In Los Angeles, it’s not unusual to see a Beemer streak by with a Bernie 2020 sticker on the back bumper. There’s no such thing as a poor socialist and Bernie’s backers tend to have lots of cash.

While Bernie Sanders accuses Bloomberg of trying to buy his way to the nomination, the socialist bought his surge with $50 million in spending. He raised $25 million just in January. There’s more buying to do.

And while he boasts of backing from small donors, the wealth of his donors is anything but small.

Google, Amazon, and Microsoft. Their employees are three of the top 4 Bernie donors. Apple is in fifth place. These dot coms are not exactly organizations known to employ members of the proletariat. Google software engineers have sent thousands of dollars, individually, to Bernie.

Posted on December 4, 2017 by ifnm| Comments Off on ‘Victims of Socialism’ event triggers Bernie-loving students

The Young Americans for Freedom chapter at the University at Buffalo drew sharp criticism for an upcoming event on “the victims of socialism,” prompting some students to vandalize their property. After YAF posted about the vandalism on Twitter, one student accused the conservative group of tearing down its own flyers to attract attention, but another student subsequently confessed to the deed.

Members of the University at Buffalo’s Young Americans for Freedom chapter were recently blamed for vandalizing their own flyers, only for a liberal student to confess responsibility.

“Just 2 weeks until our speaker event! Some of our flyers were missing today, so we graciously replaced them for your convenience!,” YAF tweeted on November 20, accompanied by a picture showing numerous gaps where posters were removed.

The posters in question were advertisements for the clubs upcoming event called “The Victims of Socialism,” with the posters featuring a grimacing Sen. Bernie Sanders, reading “Feel the Burn: How Socialism Harmed Millions.”

Comments Off on ‘Victims of Socialism’ event triggers Bernie-loving students

According to multiple media reports, police have arrested one Juan Thompson from St. Louis in connection with more than six bomb threats against Jewish community centers, schools, and a Jewish museum.

The New York Times reports that Juan made some threats in his own name and others in the name of an ex-girlfriend. The full court document (previewed below) shows the full details of charges filed against him.

Following news of Juan’s arrest, speculation was rampant on Twitter that this was the same Juan Thompson that was fired from The Intercept for fabricating sources.

Democratic Party Suffers Nervous Breakdown In Philly: The Inside Story

Posted on July 29, 2016 by ifnm| Comments Off on Democratic Party Suffers Nervous Breakdown In Philly: The Inside Story The Democratic National Convention was almost literally a disaster area.

Bernie Sanders suspended all party rules on the floor of the convention to personally nominate Hillary Clinton by a voice vote. Left-wing protesters rampaged in the streets. Pro-Bernie delegates walked off the convention floor in protest. Agitators seized the mainstream media’s control center against an outnumbered police force. Speakers were booed. Green Party candidate Jill Stein crashed the event and emerged as the new Bernie Sanders in the general election. A man set himself on fire stomping on a burning American flag.

Breitbart News special correspondents rode into Philly as the Wikileaks DNC email revelations rocked the city and the world. The DNC rigged the primary fight for Hillary Clinton, actively colluding against Bernie Sanders. And Bernie just sat in his balcony underneath the Bloomberg Politics banner and smiled and took it.

“He wants to divide us from the rest of the world,” she said, pushing globalism against Trump’s nationalism.

“We will not ban a religion,” she said. She loudly ranted at awkward times in her speech, like when she was reciting the job titles of teachers and doctors and police officers (etc. etc.) who can fix the country in addition to Trump, who said that “I alone can fix it.”

Comments Off on Democratic Party Suffers Nervous Breakdown In Philly: The Inside Story

Using flatulence as a protest tool was, according to the Daily Kos, apparently the brainchild of Saul D. Alinsky, who coincidentally corresponded with Clinton while she was writing her 1969 Wellesley College thesis on his theories of community organizing. But for Tsou, the reason why he and others — including some Democratic delegates who support former candidate Sen. Bernie Sanders — plan to eat beans and pass gas at the Democratic National Convention in Philadelphia is anything but a laughing matter.

“It’s a whimsical way of raising a protest,” Tsou told NBC News. “There’s a lot of things that stink about this whole democratic primary process.”

Billed as a “fart-in,” the coordinated assault on the olfactory system is scheduled for July 28 both inside the Wells Fargo Center and outside on the street, at the moment presumptive Democratic presidential candidate Hillary Clinton accepts the party’s nomination, organizer Cheri Honkala told NBC News.

“For us, this whole thing is a farce, it’s a charade,” said Honkala, who was Green Party candidate Jill Stein’s vice-president pick in 2012. “They’re creating the illusion of democracy in a very important historical location, Philadelphia, and we’re really saddened by that.”

Dear Millennials: College, like Health Care, isn’t free — it costs money. So who pays for it? YOU DO. Find out how in Bill Whittle’s latest Firewall. 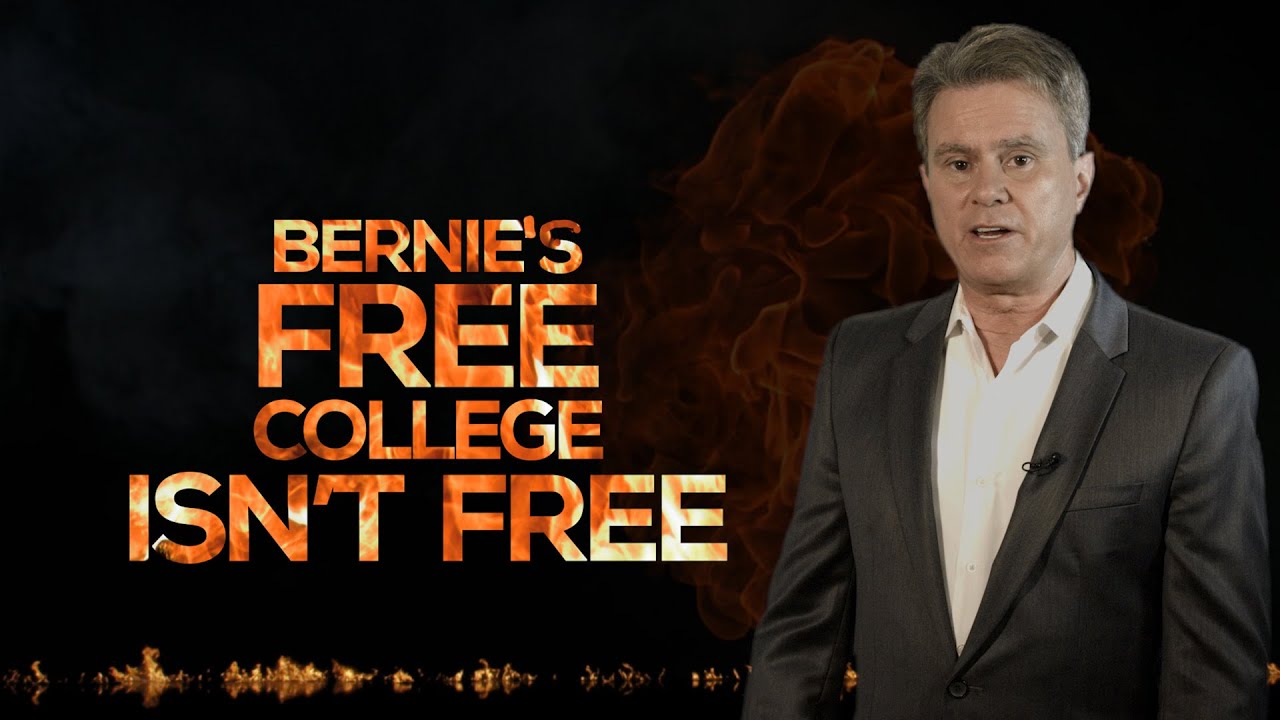 Bernie Sanders Tells Supporters To Knock Off The Violence (Video)

Posted on June 6, 2016 by ifnm| Comments Off on Bernie Sanders Tells Supporters To Knock Off The Violence (Video)

Sanders said, “Any person who is a Bernie Sanders supporter, please, do not in any way, shape or form engage in violence.”

Sunday on CNN’s “State of the Union,” Democratic presidential candidate Sen. Bernie Sanders (I-VT) asked his supporters not to engage in violence in response to anti-Trump mobs attacking Donald Trump supporters as they left his rally in California last week.

TAPPER: I want to ask you about some of the violence we’ve seen by anti-Trump protesters against supporters of Trump. Some of these people who have been very violent have been seen with your signs, Bernie Sanders signs, chanting your name. Do you condemn the violence?

SANDERS: I condemn it, absolutely. And let’s be very clear: We have millions and millions of people who are supporting us, and I want to make it clear that any person who is a Bernie Sanders supporter, please, do not in any way, shape or form engage in violence. That is absolutely not what this campaign is about.

Posted on May 27, 2016 by ifnm| Comments Off on SANDERS v. TRUMP DEBATE accepted by both candidates

Sanders quickly responded with a tweet reading, “Game On. I look forward to debating Donald Trump in California before the June 7th primary.”

Presumptive Republican nominee Donald Trump and the socialist senator from Vermont, Bernie Sanders, have both agreed to debate each other.

Last night on “Jimmy Kimmel Live!” Trump was asked if he would consider holding a debate with Sanders. Trump responded, “If he paid a sum toward charity I would love to do that,” said the business mogul, noting that a Sanders vs. Trump debate “would have such high ratings.”

Comments Off on SANDERS v. TRUMP DEBATE accepted by both candidates

Posted on May 6, 2016 by ifnm| Comments Off on Latinos, Bernie Sanders Fans Protest Hillary Clinton in L.A. (Video)

Protesters took to the streets outside East Los Angeles College on Thursday to demonstrate against Democrat presidential frontrunner Hillary Clinton, who was inside the college gymnasium for a Cinco de Mayo campaign rally. Dozens of protesters — including from the Black Lives Matter movement and the East L.A. Brown Berets, some of whom sported masks — waved Mexican flags and brandished signs with slogans including “Clinton Crime Family,” “Hillary for Prison 2016” and “Bernie 4 President.”

Clinton was in the predominantly Hispanic neighborhood of Monterey Park to host the evening rally, where she called for comprehensive immigration reform and warned that “loose cannon” GOP presidential frontrunner Donald Trump would create a “deportation force to round up millions of people.”

Clinton also said that her first priority as president would be “creating good jobs” and “raising income,” and vowed to follow California’s lead in raising the federal minimum wage.

Thousands of Clinton supporters stood in a line that snaked around the block to wait their turn to enter the rally, but many were turned away as the gymnasium filled quickly.

Posted on May 4, 2016 by ifnm| Comments Off on Sanders hugs undocumented immigrants onstage at rally (Video)

After hugging and shaking hands with the two men, Sanders allowed one of the supporters to approach the microphone. “Viva Bernie!” he said to loud cheers.

“There are 11 million undocumented people in this country, and I have talked to many of them,” the Democratic presidential hopeful told supporters as laughter and applause interrupted his speech.

“There’s one right here,” the Vermont senator said, pointing to an individual in the crowd.

“There’s two,” he added before inviting the supporters on stage.