Stars: Lana Turner, Anthony Quinn, Richard Basehart. After a married woman and her lover murder her cruel husband, they find themselves targeted by someone who is aware of their crime. 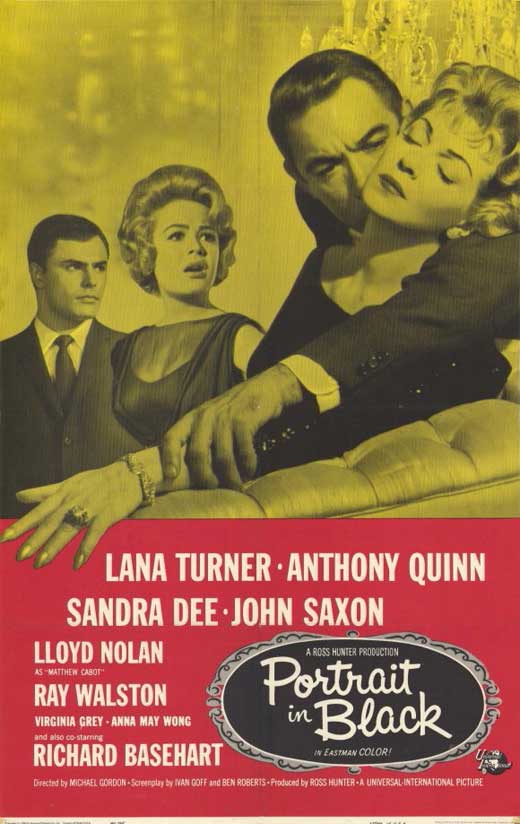 Comments Off on Complete Classic Movie: Portrait in Black (1960)

Posted on December 31, 2015 by ifnm| Comments Off on Up to 34 MILLION blank ‘green cards’ and work permits to be ordered ahead of Obama illegal immigrant ‘amnesty’

An online draft proposal from U.S. Citizenship and Immigration Services says it will look for a vendor to supply the blank cards. At least 4 million per year for five years, including a possible 9 million in the early going. Document says the move is ‘to support possible future immigration reform initiative requirements.’ Obama has pledged to unilaterally change US immigration policy this year, but recently pushed back his timetable until after November 4 elections. U.S. Citizenship and Immigration Services plans to seek a vendor to produce as many as 34 million blank work permits and ‘green cards’ – the paperwork that authorizes immigrants to live and work in the United States – as the White House prepares to issue an executive order after the Nov. 4 midterm elections.

According to a draft solicitation published online, the government agency will look for a company that can produce a minimum 4 million cards per year for five years, and 9 million in the early stages.

President Barack Obama has pledged that he will make a move on immigration reform this year. His original timetable called for a decision by the end of the summer.

Republicans have decried the plan as an ‘amnesty’ for millions of illegal immigrants, including hundreds of thousands of unaccompanied minors who have come across the U.S.-Mexico border this year.

Posted on December 31, 2015 by ifnm| Comments Off on New Year’s Surprise: Obama Regulation To Give Work-Permits To Foreign College-Graduates

As the nation prepares to ring in the New Year, President Barack Obama is preparing a colossal new executive action that could print-up work permits for a huge number of foreign white-collar graduates every year, above and beyond the levels set by Congress. This executive action, which directly bypasses Congressional lawmakers, is likely to reverberate across the presidential race, as GOP voters look to choose a nominee they believe will most effectively roll back the President’s still-expanding agenda. And it will certainly raise new security concerns as it covers categories of immigration utilized by migrants from the Middle East and nearby regions.

The 181-page rule focuses primarily on giving work-permits to foreign college-grads who will compete against Americans for white collar jobs, despite the large number of American graduates now stuck in lower-wage positions and struggling to pay off college debts. The rule will also make each foreign graduate much cheaper for U.S. employers to hire than many U.S.-born college grads.

“Obama has gone the Full Monty to bust the immigration system,” says immigration lawyer John Miano. “What is going on is he is effectively giving Green Cards to people on H-1B visas who are unable to get Green Cards due to the [annual] quotas… it could be over 100,000.”

Comments Off on New Year’s Surprise: Obama Regulation To Give Work-Permits To Foreign College-Graduates

Posted on December 31, 2015 by ifnm| Comments Off on Americans pay Iran’s compensation for ’79 hostage crisis

A fund of over $1 billion has been created for the U.S. embassy personnel taken hostage by Iran after the 1979 Islamic Revolution, but it is the U.S. taxpayer, not Iran, who will be paying for it.

The new fund, known as the “United States Victims of State Sponsors of Terrorism Fund,” was an addition to the omnibus bill put forward by Congress and signed into law by President Barack Obama Dec. 28. As much as $4.4 million could go to each of the 52 Americans held by Iran, with another $600,000 going to each spouse and child of the victims. The provision authorizes $1.025 billion from the Department of the Treasury to be used to pay for the new fund. Additionally, the legislation includes a 25 percent cap on any attorney’s fees, which could lead to as much as $250 million total going to lawyers of the various victims involved.

Houston Muslim Charged With Lighting His Own Mosque On Fire

Posted on December 31, 2015 by ifnm| Comments Off on Houston Muslim Charged With Lighting His Own Mosque On Fire

The media’s playbook is always to immediately use any disaster or crime as a means to make the GOP answer for it. Then, once the facts come out and point to a member of the Protected Class, the story is memory-holed and the accusation against the Republican lingers. Using surveillance video from other area businesses to identify the arsonist, Gary Nathaniel Moore, 37, was arrested and charged with starting the Christmas Day fire that devastated a Houston, Texas mosque. Moore is a devout Muslim who attended this same mosque for years, praying up to five times a day every day of the week.

Also up in smoke is the DC Media’s hoped-for anti-GOP Narrative. Before any facts were known, numerous DC Media outlets immediately exploited the tragedy to place the blame for the fire on Donald Trump.

Advocacy groups believe there has been a spike in anti-Muslim incidents across the United States in recent weeks that can be linked to the mass shooting in California and the inflammatory rhetoric of Donald Trump and other Republican presidential candidates. And they say that Muslims are fearful the backlash could lead to further harassment and violence.

Al Jazeera and Its Hatred of White America

Posted on December 31, 2015 by ifnm| Comments Off on Al Jazeera and Its Hatred of White America

Al Jazeera, which has made its contempt for the white citizens of America known for years, seized the opportunity to malign a white American icon, Hall of Fame-bound quarterback Peyton Manning, without vetting the story completely. Why? Al Jazeera’s hatred of white Americans was amply demonstrated during the presidential campaign of 2008, when it aired a video in which it interviewed supporters at a rally for Sarah Palin and featured them acting fearful of a Barack Obama presidency. The video’s central character, an Obama supporter, even clinched the deal by asserting he was afraid for Obama’s safety.

Does it have hatred of American Christians? Try this: on June 25, 2009, Al Jazeera reported, “many Christians on the right describe the wars in Afghanistan and Iraq in similar terms as the Taliban and al Qaeda¯as spiritual wars of the highest magnitude. Fundamentalists on both sides feed the fires of hatred and racism to support their world views.”

On July 4, 2015, Al Jazeera released one of the most virulent America-hating videos ever created, titled, “Americans Show Why USA Is The #1 Country In The World.”

The network’s corruption has been noted for years; Al Jazeera’s long-time Berlin correspondent Aktham Suliman quit in 2012, stating, “Before the beginning of the Arab Spring, we were a voice for change, a platform for critics and political activists throughout the region. Now, Al-Jazeera has become a propaganda broadcaster.”

In 2013, 22 journalists working in Egypt for Al Jazeera quit, claiming the network, owned by the nation of Qatar, slanted the news to favor the Muslim Brotherhood.

Comments Off on Al Jazeera and Its Hatred of White America

The N.Y. Times’ Syrian refugee of the week by Ann Coulter

Posted on December 31, 2015 by ifnm| Comments Off on The N.Y. Times’ Syrian refugee of the week by Ann Coulter 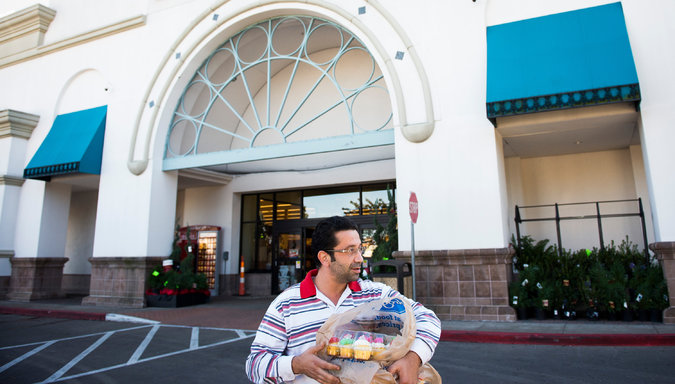 On Christmas Day – three weeks after the son of a Pakistani immigrant and his Pakistani immigrant bride murdered 14 people in San Bernardino, California – the New York Times told the heartwarming story of “Kamal,” a Syrian refugee who resettled into Houston, Texas, earlier this year and immediately started shopping at Wal-Mart.

The Times considers it tacky when actual Americans go to Wal-Mart, but Muslim immigrants seem to live there, buying nothing but American flags and Christmas trees.

Thus, we’re told Kamal has an outdoor Christmas tree from Wal-Mart, and we find him carrying two trays of cupcakes from Kroger’s for his children’s elementary school holiday party.

Kamal – like the Times – was “angered” by Texans’ reluctance to accept more Syrian refugees. He says of Americans: “Why did you bring me here and why then you let the people hate us?”

We brought you here, Kamal, because the Democrats need voters and the rich need cheap servants.

As for letting “the people” hate refugees, they don’t, but if they did they’d have a right to do so. It goes back to that whole thing with John Locke, John Milton and the English Bill of Rights in 1689. (Of course, in Syria, it’s always the year 400, so this is merely pedagogical.)

Comments Off on The N.Y. Times’ Syrian refugee of the week by Ann Coulter

Ted Nugent cites myriad activities that made up his ‘phenomenal 2015’

Oh the glory of it all! I don’t know about anyone else, but I sure did have a phenomenal 2015.

I started off the year a little more uppity and mobile than usual with my brand new knees, hunting nonstop through January and February, whacking and stacking magnificent, organic dinner on the hoof beasts aplenty to share pure, nutritious venison with family, friends and charities across the land.

Entering my 66th American Dream 2015 year full on with maximum spirit and energy, attitude and fire, I rocked my 6,517th fire-breathing R&B Rock ‘n’ Roll concert for the ultimate soulmusic lovers in the world with the ultimate funkbrother rockers that this old Motown guitarplayer could ever dream of.

The hunting and trapping was great all winter long, and the spring fishing was spectacular.

The mystical flight of my arrows was soul-stirring and supremely protein-procuring to say the least.

Comments Off on In 2016, we the people must raise hell or die!

Posted on December 31, 2015 by ifnm| Comments Off on Gohmert on Report of Illegal Immigration Surge (Video)

Rep. Louie Gohmert talked to Stuart Varney on Fox Business about the report of the surge of illegal immigrants at the Texas border. The report notes that 101% more Unaccompanied Minors and 173% more ‘Family Units’ have been apprehended this year.

Comments Off on Gohmert on Report of Illegal Immigration Surge (Video)

Posted on December 31, 2015 by ifnm| Comments Off on No-Go Zones: German Police Admit To Losing Control Of Immigrant ‘Problem Neighbourhoods’

The development of so-called “problem neighbourhoods” or “lawless neighbourhoods” in Germany over the course of 2015 has made law enforcement impossible in some areas, according to police reports. The latest admission of the developing problem of no-go zones in Europe comes from state police in North Rhine-Westphalia (NRW), a west German state that borders Belgium and the Netherlands. Here, an inquiry by a Conservative Democratic Union (CDU) politician into the state of policing has elicited an embarrassing admission of failure by local police to keep the situation under control.

In Germany, state police are responsible for local law enforcement, but in emergencies can call upon Federal police and appeal to neighbouring states for support. The CDU parliamentary deputy Gregor Golland’s question had revealed 78 per cent of all local regions within NRW have had to bring in external re-enforcements this year due to migrant criminal gangs, reports the Rheinische Post.

The migrant crime in the state is blamed on flourishing criminal gangs, particularly ones emerging from the Lebanon, Poland, and Serbia, which have proven difficult for the police to penetrate. One NRW detective said that these “family” ties borne of ethnicity and foreign nationality make suspects reluctant to speak to police, and investigators routinely experienced “silence during interrogations”.