Posted on August 26, 2022 by ifnm| Comments Off on Intellectual Froglegs: Breaking the Matrix (Video)

If you love America… it’s crunch time. And although unlike any other in history—this is war. The stakes have never been higher in my life.

Our freedom is at stake. Our children’s futures are at stake… and we’re barreling towards the most consequential midterm elections ever… against an enemy that has no moral guardrails, whatsoever. They are evil.

It doesn’t matter who you are, where are you are…if you’re rich, or if you’re poor— everybody can do something.

And for those of you that know me, you know I’m no sycophant of anyone except for my Lord and Savior.

Comments Off on Intellectual Froglegs: Breaking the Matrix (Video)

Posted on January 6, 2018 by ifnm| Comments Off on The Capitalist that Saved America – Intellectual Froglegs

America is starting to feel like America again (complete with the buzz of liberals bitching in the background).

And at the risk of sounding sycophantic… I’m beginning to think Donald Trump is from the planet Krypton and his real father’s name is Jor-El… Are you kidding me?

Like most of you—I’d become conditioned to believe that ANY positive changes to our government (if not impossible) would be a painfully long process.

Not our President. But again, there is little ‘conventional’ about Donald John Trump.

President Trump has had the most successful first year in modern presidential history— yet over 90% of his coverage by the mainstream media is negative. Despite all that… the Trump economy is exploding. Breaking a new record almost daily…it seem.

Comments Off on The Capitalist that Saved America – Intellectual Froglegs

Posted on October 26, 2017 by ifnm| Comments Off on Traitors and Lunatics – Intellectual Froglegs

The anti-Trump forces, the liberals, the rhinos and other assorted globalists are actually more anti-American than they are anti-Trump, because truth be told—they are opposed ANYONE that’s America First…. but be that as it may, they are losing on every front—from Hollywood to the NFL to our now hysterical attack-dog media… 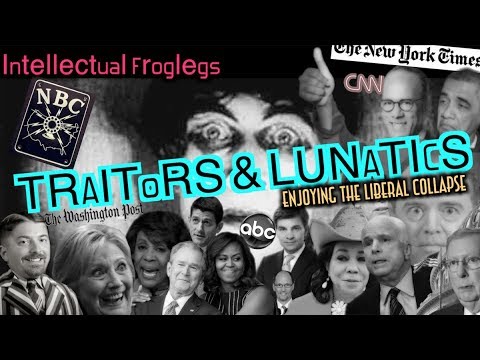 …and it is glorious to watch.

Even miracles are happening— ‘the 8-year Mute’ George W. Bush suddenly spoke. Of course, he used this opportunity to criticize Trump as did his Democrat counterpart- Barack Insane Obama – who incidentally, between these 2 former presidents are responsible for 75% of America’s $20 Trillion budget.

Neither made reference to Trump’s amazing economic numbers thus far.

As a matter of fact— don’t expect Trump to get ANY credit for ANY good deed.

Publicly attacking President Trump for the very personal phone call to the family of one of our fallen heroes… is even a new low for these sick, sick people. But not surprising.

Comments Off on Traitors and Lunatics – Intellectual Froglegs

Posted on September 29, 2017 by ifnm| Comments Off on Knee Jerks – Intellectual Froglegs (Video)

This NFL crap is the latest chapter of the Left’s attempt to ‘normalize’ hating America, our flag and our anthem. The liberal philosophy is that you are only TRULY virtuous if you hate America.

The left apparently also experience some viagra-type euphoria from watching America be disrespected.

But you know what? This is just more of the same crap that gave us Trump—and now Judge Roy Moore in Alabama. CONGRATS JUDGE!!!

There is an American Revival of sorts going on… I feel it. You feel it. And the NFL is definitely feeling it, lol

As voters we still have a lot of work in front of us. Target: The Great Incumbent Purge of 2018.

In the meantime, enjoy the show.

Posted on August 31, 2017 by ifnm| Comments Off on “MOB-OCRACY” the Legacy of Hussein Obama – Intellectual Froglegs (Video)

ANTIFA…. OCCUPY…. BLM…. Obama’s Legacy. Marxist Jihad on our history. Flaunting communist symbols….. This is as radical as it gets folks. And it needs to be shut down. But it won’t be for a while…they are a well-funded group. See: Soros

I’m not a big ‘make a new law’ person – but I would absolutely support laws against covering your face at these “riots” that the media laughably calls “protests.”

One of the best guys on the radio— the multi-talented Phil Valentine joins me to discuss his new book “The First Face of Janus” and his top-selling ‘anti-Al Gore’ movie “An Inconsistent Truth.” Buy one or both—and let Phil know you saw him on Intellectual Froglegs.

Posted on July 29, 2017 by ifnm| Comments Off on Tar & Feather (and other fun American traditions) – Intellectual Froglegs (Video)

Trump is fighting back. Good! These people are ruthless, they’re attacking his kids now, and enough is enough. While Gorka and Sekulow are taking it to the liberals in the broadcast media….almost simultaneously President Trump hires this tough guy … Anthony Scaramucci aka ‘Mooch’ to deal with the White House leakers.

In the meantime, we’ve been betrayed by Republican Leadership yet again. Imagine that. Yawn. Our elected servants, aka the DC Millionaires Club, who are self-exempt from Obamacare— are forcing this Socialist Burden on us. I say we bring back the age-old tradition of TAR & FEATHERS.

This just means we have more work to do in the 2018 Midterm Elections.

How about THIS for an appropriate verse for congress.
And Jesus said, Woe unto you also, ye lawmakers for ye lade men with burdens grievous to be borne, and ye yourselves touch not the burdens with one of your fingers. Luke 11:46

Posted on June 30, 2017 by ifnm| Comments Off on Trump vs The Swamp Creatures – Intellectual Froglegs (Video)

Liberalism is an ideological cockroach—and it will be back another day—but not today, heh heh heh. Just a few short years ago— I thought conservatism was dead, but now I am reminded what my mom (Louise Tutt Gorman) used to say “the sun don’t shine on the same dog’s ass every day.”

Comments Off on Trump vs The Swamp Creatures – Intellectual Froglegs (Video)

Posted on April 29, 2017 by ifnm| Comments Off on The Size of Church Bells – Intellectual Froglegs

We can dicker over ideological details later—our first order of business should be to help Trump put this train back on the track.

Most everything I know about Trump, I learned since he entered the election— and I quickly learned you never try to predict the man’s actions.

But I also learned another thing—never bet against him —- Trump will win. And in this case… it means America wins.

And while our apolitical president can hardly be considered ‘conservative’—the core of what he’s doing absolutely is. In fact, Trump’s is the most conservative agenda since Reagan.

Comments Off on The Size of Church Bells – Intellectual Froglegs

Posted on April 2, 2017 by ifnm| Comments Off on Trump Train vs Crazy Train – Intellectual Froglegs (Video)

It’s not just liberal media that’s going crazy during these first months of the Trump Administration— Trump is also playing a little havoc with the right wing media too — albeit for different reasons.

We’ve watched as the hysterics of the irrational left morphed into white noise— their freshly acheived plateau of irrelevancy is second only to their wildly misplaced arrogance. Yet amazingly, they seem undeterred and impervious to embarrassment.

Nobody’s paying attention to them anymore.

Well, except for a lot of our friends on the right, who jobs rely on news, news and more news.

If President Trump weren’t unpredictable enough, he’s doing nothing by the book. AS a result, I’m noticing many of the trusted voices on the right, that beautifully analyze the news—- are now in the unenviable position of trying to predict the news… in other words: What in the hell is Trump going to do next? Why is he doing this? Why did he say that? And they’re at further disadvantage of using an old playbook— Democrat vs Republican.