Posted on May 19, 2022 by ifnm| Comments Off on Alberta Premier Mocks Biden for Refusing Canadian Oil: ‘You Don’t Need the U.S. Navy’s Fifth Fleet to Patrol the Great Lakes’

“After the United States has spent hundreds of billions of dollars securing Persian Gulf energy over the last fifty years, it turns out that the solution to the challenge of energy security is your closest friend and ally!” he added.

One of the most frustrating aspects of the Biden administration — and Lord knows there are a lot of things that infuriate people about them — is the way the U.S. went from a net energy exporter to record high gas prices and a reliance on oil imported from other countries.

The administration knows exactly what it’s doing. The White House has acquiesced to the environmental lobby, and the end game is a push for “green energy” that’s both infeasible and expensive, at least right now. But that hasn’t stopped the drive to punish Americans who haven’t followed the administration’s flippant advice to buy an expensive electric vehicle.

In the meantime, until all you rubes go electric, the administration is looking to nations that are hostile to American values like Venezuela and Iran. If we must import our oil, why not get it from North America? I’ve written before about one Canadian official who has invited the U.S. to buy oil from our friendly northern neighbors, and this week the premier of one Canadian province (like the governor of a state) spoke to a U.S. Senate committee to make the same offer.

Posted on May 18, 2022 by ifnm| Comments Off on Washington launched a ‘war’ on North American oil: Billionaire supermarket owner (Video)

United Refining Chairman and CEO John Catsimatidis, who is also the billionaire owner and CEO of New York City supermarket chain Gristedes, argues ‘there is a war by Washington on North American oil.’

Posted on April 7, 2022 by ifnm| Comments Off on Wind Energy Company to Pay $35 Million After Mass Killing of Bald Eagles

In its settlement with the government, ESI further admitted to killing 150 bald and golden eagles with its wind turbines across the country since 2012.

The dark side of green energy has taken an un-American twist.

A renewable energy company that operates wind turbines throughout the United States pled guilty to killing 150 protected eagles in federal court on Tuesday.

ESI Energy LLC admitted to three violations of the Migratory Bird Treaty Act in its plea, namely killing bald and golden eagles through the operation of wind energy turbines in New Mexico and Wyoming.

The birds died of blunt force trauma after colliding with wind turbine blades at the green energy farms.

In its settlement with the government, ESI further admitted to killing 150 bald and golden eagles with its wind turbines across the country since 2012.

Posted on March 23, 2022 by ifnm| Comments Off on The Renewable Energy Fail – John Stossel (Video)

Energy shortages, skyrocketing prices… What’s made it worse? The attempt to switch to cleaner, renewable energy.

Comments Off on The Renewable Energy Fail – John Stossel (Video)

The nuclear disaster scam; how to drag other countries into an unwanted war (Video)

Posted on March 6, 2022 by ifnm| Comments Off on The nuclear disaster scam; how to drag other countries into an unwanted war (Video)

The very word ‘nuclear’ has a terrifying effect upon people. When Ukraine announced that there was a risk of another leak at a nuclear power station, like the one at Chernobyl in 1986, many people began running around like headless chickens.

Comments Off on The nuclear disaster scam; how to drag other countries into an unwanted war (Video)

Nationalism to Confront Globalism in Glasgow by Pat Buchanan

Posted on October 19, 2021 by ifnm| Comments Off on Nationalism to Confront Globalism in Glasgow by Pat Buchanan

On Friday, U.S. oil prices hit a seven-year high amid a surge in global demand and a supply crunch induced by OPEC. West Texas Intermediate crude, the U.S. oil benchmark, climbed to $82 a barrel. Gas prices followed… Oil is at its highest price since OPEC launched its price war against U.S. shale producers.

“Extraordinary, isn’t it? I’ve been hearing all about COP,” said the queen to the duchess of Cornwall. “Still don’t know who is coming. … We only know about people who are not coming. … It’s really irritating when they talk but they don’t do.”

Queen Elizabeth II was expressing her exasperation at the possible number of no-shows at the U.K.’s coming climate summit in Glasgow, Scotland.

Among the absentees may be Chinese President Xi Jinping, whose country generates more carbon dioxide than the U.S. and EU combined.

Behind the queen’s exasperation, however, lies a political reality.

Posted on May 13, 2021 by ifnm| Comments Off on Green New Deal: John Kerry Admits Uyghur Slave Labor Is Being Used to Build Solar Panels

When Congressman Christopher Smith (R-NJ) followed up, Kerry then said he has not raised the issue of slave labor with China’s climate change envoy.  “That’s not my lane. My lane is very specifically is to try and get the Chinese to move what we need to do with respect to climate itself,” Kerry said.

Testifying in front of the House Foreign Affairs Committee Wednesday morning, former Secretary of State and Biden Climate Czar John Kerry was pressed on the Chinese Communist Party’s use of slave labor to make and sell solar panels to the rest of the world. Kerry said the abuse and genocide of the Uyghurs, who are forced to build the panels, is a “problem,” but said climate change must be addressed through “clean” sources of energy.

“How can you assure us, this quest that we’re on [clean energy] that slave labor coming out of China where genocide is taking place as we speak, are never a part of the climate solution in the United States?” Ranking Member Michael McCaul (R-TX) asked.

“It is a problem. Xinjiang province not only produces some of the solar panels that we believe are being, in some cases produced in forced labor by Uyghurs, but also there are a significant amount of rare earth mineral that are used in the solar panel themselves,” Kerry said. “Nothing can be traded and I’ve made that very clear. President Biden has made it very clear. Climate is existential for everybody on the planet. We have to deal with it and because China is nearly 30 percent of emissions on that planet China has got to be a bigger part of the solution, not the problem.”

Daines went on to say that Democrats are “no longer a friend of the American worker,” adding they are instead “friends with the radical left Green New Deal side” of the Democratic Party.

Senator Steve Daines (R-MT), a member of the Senate Energy Committee, on Friday, slammed President Joe Biden’s “radical” agenda that halted the construction of the Keystone XL Pipeline. The move erased 11,000 jobs in the United States.

Daines said the immediate decision to nix the Keystone Pipeline is “outrageous” and “all part of President Biden’s Saudi Arabia First Plan.”

“I think it’s all part of President Biden’s Saudi Arabia First Plan,” Daines said on Fox News Channel’s “America’s Newsroom.” “It looks like he cares more about workers in Saudi Arabia than the workers in America. this is the kind of direct effect of the pocketbooks of the American people. Here, we’re in the middle of a pandemic. He just killed 11,000 jobs. It is $80 million of tax revenues from my state of Montana to impoverished counties to help make ends meet for schools and law enforcement and infrastructure. This is a major infrastructure project that President Biden killed six hours into his presidency. It’s outrageous, and it’s going to get worse. We’re hearing now that President Biden is planning to put a moratorium on any new oil and gas lease on federal lands. This is estimated to cost us a million jobs between now and 2022.”

Posted on May 16, 2020 by ifnm| Comments Off on Elon Musk’s prediction for the future of energy in Australia | 60 Minutes Australia (Video)

It’s been a miserable few weeks for Malcolm Turnbull’s government, stalled by myriad cock-ups and controversies. But the greatest challenge it faces continues to be Australia’s crisis over energy supply and cost. Who hasn’t been shocked by a recent electricity or gas bill? And who isn’t infuriated that power prices have risen so sharply? In a country as abundant with resources as ours it defies logic that there are now some Australians who can’t even pay for the electricity or gas to cook a simple meal. While federal – and state – politicians scramble to act, Elon Musk, the American billionaire with the brilliant mind, says he wants to help. In an exclusive interview with Liz Hayes, Musk says Australia’s energy emergency is easily fixable, and his construction of the world’s largest lithium ion battery at Jamestown in South Australia is proof.

Posted on January 1, 2018 by ifnm| Comments Off on North Dakota’s Pipeline Payoff 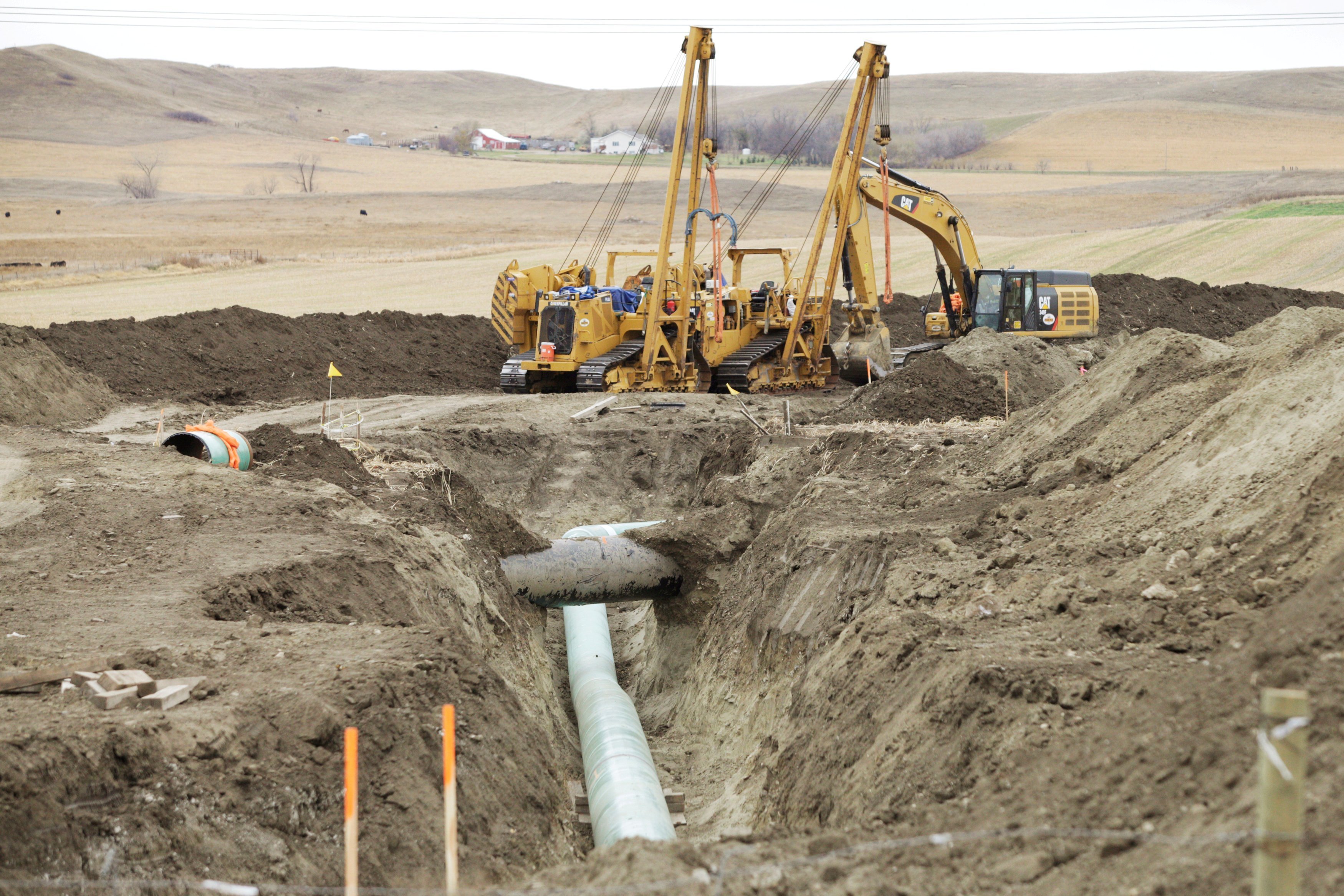 The pipeline has significantly lowered energy transportation costs and energy companies to move their oil to the Gulf Coast, where it fetches a higher price. So it’s little surprise that energy production has surged since the Dakota Access Pipeline opened.

Posted in Economy and Debt, Energy