Posted on December 18, 2021 by ifnm| Comments Off on Chicago Car Dealer on $1M Smash and Grab: Lightfoot, Foxx Building ‘Network of Thieves’

Perillo’s Gold Coast Exotic Motors, which includes an elite fleet of vehicles, including Bentleys, Lamborghinis, and Ferraris, was the target of a smash and grab robbery on Saturday, and the thieves allegedly stole over a million dollars worth of luxury watches.

The Chicago City Wire reported on the crime and Perillo’s reaction:

Perillo had just left and was visiting another location in Downers Grove when the smash-and-grab happened. He has gained some renown after a passionate interview to Fox 32 in the aftermath of the theft.

“I said two words. ‘Enough is enough’ is how I started the interview. I’ve been bombarded by people all over the country. My emails are blowing up … people that know people that I know are getting out, they feel sorry for me,” he told AM 560’s The Morning Answer.

More than for himself, Perillo said he feels bad for his residential neighbors who do not feel safe or protected on the city’s streets. He said it is time to start a campaign.

Posted on November 8, 2016 by ifnm| Comments Off on ‘We’re Somalis, We Don’t Pay’: Migrants Smash Bistro with Iron Bars

The owner of a pub and bistro was fearing for his life when Somali migrants smashed the door and windows of his business after they refused to pay the bill. The group of five migrants sat drinking in the Piano bistro in Waburn, Germany, on Wednesday evening, putting everything on a tab. When presented with a €17 bill for the eight beers and two vodkas they had consumed, the men became aggressive.

“We are Somalis, we do not pay” they said, as two of the men stormed out of the establishment. Owner Selami Albayrak kicked out the remaining three Somalis, who still refused to settle the bill, and told them the group are banned from the premises.

“They were aggressive, they were angry”, Albayrak told local newspaper HNA, recounting that he locked the door of the pub behind him.

A short time later, while preparing the bill for his last customer that night, a regular, Albayrak heard loud banging and crashing noises. As he walked through to the main area of the pub, the 58 year old saw that two of the Somalis had come back with iron bars, which they were using to repeatedly smash against the bistro’s door and windows.

“I had a panic [attack] that nearly killed me”, Albayrak recalled. The veteran innkeeper revealed he had never been so afraid for his life in all the 15 years he has been running the “Piano”.

Posted on November 1, 2016 by ifnm| Comments Off on Gangs of Teen Girls Attacking, Robbing Shoppers in Chicago’s Famed Loop

Chicago police have warned residents about several groups of up to eight girls which are assaulting and robbing female shoppers who are walking city’s famed Loop shopping district. Chicago police reported that three African American girls, two 15-year-olds and one 13-year-old, have been arrested after being seen on surveillance video beating a female walking alone in the city’s Loop. The victim, one of several, was also robbed of her belongings, according to DNAInfo Chicago.

Officials said the gangs of teen girls would sneak up behind a lone shopper, grab at her purse and/or bags, and push the women down and punch and kick her before running off with the goods.

The roving gangs of between five and eight girls would essentially swarm around the victim and attack on all fronts. The pedestrians were often struck in the head immediately, police said.

A violent mob of between 100-200 black inner-city residents went to Temple University on Friday night to hunt down and beat up innocent white victims — but one wouldn’t know it based on mainstream media reports.

Glaringly absent from these headlines is the inherently racial nature of the attack, which was made shockingly clear in a Facebook post authored by Joe Lauletta, father of victim Christina Lauletta.

“I spent last night in the ER at St. Mary’s Hospital,” Lauletta began his harrowing post. “I received a call from my daughter Christina after my sons [sic] football game. She was crying, I couldn’t understand her, my heart dropped, I became scared, I said what is the matter? Dad, I was jumped, I’m beat up pretty bad. Where r u? Temple, they stole my phone. We’re heading to the police station,” he wrote, recounting their conversation.

Posted on October 27, 2016 by ifnm| Comments Off on New Details about Youth Attacks on Temple University Students, Bystanders

New details have emerged from the investigation into several large groups of Philadelphia youths who marauded through Temple University beating students and bystanders. Police now say over 150 youths descended upon Temple campus, and the victims now number at least seven, plus an injured police horse.

Police were called on Friday, October 21, when the mob of teens began running around the campus attacking people who were walking the sidewalks on campus. Police first claimed that perhaps as many as 50 attackers were involved, but now the number has been increased to over 150.

Also, earlier reports noted one or two victims of the attackers, but now that number includes at least six students and one police officer.

Temple University officials scrambled on Friday to send out warnings to students and staffers on campus to stay indoors while the mobs careened through the area.

Comments Off on New Details about Youth Attacks on Temple University Students, Bystanders

Posted in Flash Mobs and Looting

Flash mob violence on the campus of Temple University left several people injured and a handful of juveniles arrested.

Authorities say a Temple officer and a police horse were also assaulted during the chaos.

Investigators say it began through social media with a message for a large group of teens to meet near the campus Friday night.

Police estimate that 200 teenagers were in the crowd at the movie theater at Broad and Oxford and then divided into smaller groups, attacking and robbing students.

In one attack, police say an 18-year-old girl suffered scrapes and cuts to her leg and her cell phone was smashed. Authorities say her debit card was also taken from her purse.

Police say two other victims had items taken during the assault including an iPhone, a wallet, a back pack and a bluetooth wireless speaker.

Authorities say while investigating the report of flash mobs, police observed 75 to 100 individuals on a corner.

As officers tried to disperse the crowd, police say a 16-year-old came up to the officer’s horse and struck the horse twice in the face.

Posted on September 24, 2016 by ifnm| Comments Off on Turkish migrant gang ATTACKS locals during reign of terror across entire Dutch city (Video)

Shocking attacks have ripped through a quiet Dutch city as a mob of Turkish youths terrorised locals. The terrifying attacks have been filmed by the twisted gang of migrants around the city of Zaandam.

For months now, migrant youths have uploaded videos of themselves beating up random citizens and even intimidating police officers.

In one shocking clip last weekend, the gang can be seen relentlessly chasing after and attacking local Dutch civilians.

The chaotic fighting, in the square outside a supermarket, sees one of the attackers wielding what appears to be a crowbar.

Another chilling video captured the gang laughing while they beat up a passerby after knocking him off his bicycle.

Two weeks ago, police were criticised for arriving nearly an hour after a news crew was attacked and pelted with eggs by the terrifying mob.

In previous videos, the gang – nicknamed the ‘Erdogan warriors’ by local press – have shown off their weapons while boasting that they will “kill” people who anger them.

The city has been in turmoil for months – but the group of violent youths has finally been punished.

Crowds of locals met earlier this week at the town hall to complain about the officials’ reaction to the unrest.

A survey of the mayhem from around the country. 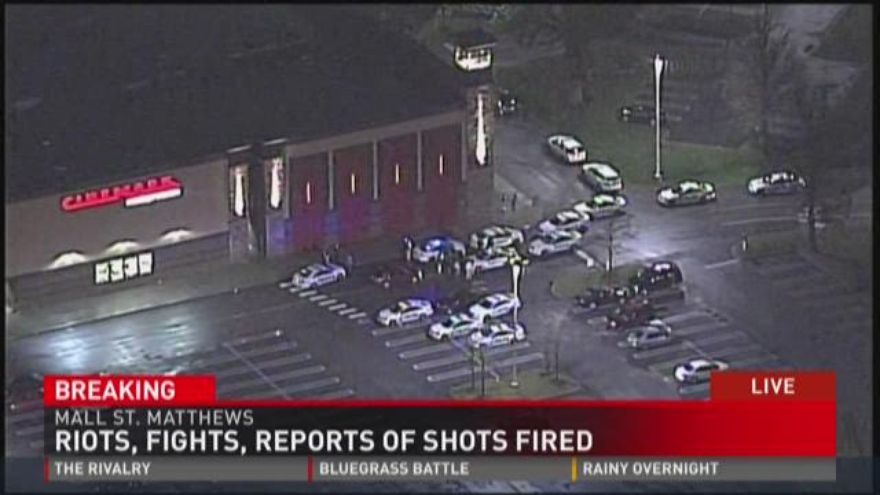 In the days before, during, and after Christmas, 15 malls reported large-scale episodes of rioting, shooting, looting, rampaging, fighting, throwing rocks at police, damaging cars and more.

A survey of the mayhem from around the country.

“Why was this whole mayhem involving black kids,” asked one viewer of WHAS. “My wife and I were there plus vids show it.”

The police spokesman said the violence was “random.”

In the Stonecrest Mall in a suburb of Atlanta, video from inside the mall shows a group of black people fighting and pulling each other’s hair. Soon after, the group of about 10-15 moved outside, where the video shows fighting, gunshots, and at least one person hitting the ground wounded, while the other participants shrieked with glee.

Posted on September 4, 2015 by ifnm| Comments Off on Wisconsin Mob: ‘We Need to Start Killing These Officers’; Punched Police Officer

Two women in Madison, Wisconsin were arrested Wednesday night after punching and threatening to kill a police officer who was responding to a 911 call about a nearby street brawl. Within minutes of arriving on the scene, police said the officer attempted to arrest a woman he saw punch a man in the face but was quickly overwhelmed by a mob of people chanting anti-police slurs, including “We need to start killing these officers.”

Police said Nanyamka N. James, 20, attacked the officer in an attempt to free her mother, Latonya B. James, 40, WISCTV reported. The mother grabbed the officer by the throat and punched him in the face, according to a Madison Police Department press release.

One witness told police that they heard the mother repeatedly threatening to kill the officer.

Comments Off on Wisconsin Mob: ‘We Need to Start Killing These Officers’; Punched Police Officer

Posted on June 12, 2015 by ifnm| Comments Off on White family beaten, shot with Taser by black mob

Hate-crime charges eyed in ‘unprovoked attack by group of thugs’ A mob of 20 to 30 black juveniles went on a rampage against a white family at a family friendly event in Wilson Park in Florence, Alabama, allegedly slinging racial slurs as they fired a Taser at the husband and beat him.

“Randomly, they just hit me in the back of the head,” he said. “I didn’t think nothing of it at first because, well, I thought maybe somebody tripped or something.”

Juli Dawes, meanwhile, said her husband, Kevin, reached out to shield their son and then the group of juveniles started attacking him.

Husband and father Kevin said: “I got in between him and the attacker and told him to go toward the van and that’s when I started getting attacked,” the local news station reported.

Juli said she was in the van with her four-year-old, watching the scene unfold.

“My four-year-old said, ‘Look, Mommy, they’re dancing,’” she said, WHNT News reported. “I said, ‘No, baby, they’re not dancing; they’re fighting.’ Then I see my husband, and he’s on the ground being Tased. … There’s this wall of people, and there was nothing I could do.”

Comments Off on White family beaten, shot with Taser by black mob