The government is once again promoting the idea of “those who are reverent of individual liberty” being terrorists with a new study funded by the Department of Homeland Security.

The study and related data were recently produced by the National Consortium for the Study of Terrorism and Responses to Terrorism, or START, at the University of Maryland. START was launched with a $12 million grant from DHS and is recognized by the organization as one of its “Centers for Excellence.” In December, DHS announced it was renewing START’s funding with another $3.6 million.

START recently released a study titled, “Hot Spots of Terrorism and Other Crimes in the United States, 1970-2008.”

The report noted that nearly one-third of all terrorist attacks from 1970 to 2008 occurred in five metropolitan counties run by Democrats.

Interestingly, the report appears to have key data missing when it comes to Islamic terrorism.

Founders Without Whom America Would Not Exist by Chuck Baldwin

As we celebrate Independence Day this year, I trust and pray that each of us will reacquaint ourselves with the principles upon which the Declaration of Independence was written, and upon which the United States of America was founded. And while we are doing that, let’s be sure we are passing these principles on to our children and grandchildren, because without their dedication and commitment to liberty, there will be no America!

As we approach another Independence Day, I think it would be good to remind ourselves of who those men were that counted the cost and paid the price to bring this land of liberty into existence. Unfortunately, the vast majority of Americans today seem to have very little–if any–knowledge and appreciation for the sacrifices that our Founding Fathers made in order to birth this great country. We can thank the vast majority of our schools (including the institutions of higher learning), major media, political institutions, and even churches for this egregious embarrassment. Accordingly, I think it fitting that today’s column will attempt to renew in our hearts the respect and reverence that these great men whom we call Founding Fathers so richly deserve.

Called “The Father of His Country,” George Washington was, perhaps, the most important man of the founding era. Supernaturally spared during the Indian wars, Washington became the military leader who held the Continental Army together when it was virtually impossible for any man to do so. Without his leadership at Valley Forge and elsewhere, there is absolutely no doubt that the Continental Army would have fallen apart and the fight for independence would have been lost.

Equally significant is the leadership that George Washington demonstrated in the Continental Congress. Without question, Washington was the glue that held the political bodies of the colonies together. Then, add the fact that George Washington was America’s first President, whose leadership solidified the colonies into a new United States, and his value to the cause of American independence cannot be in any way overstated.

Think of it: George Washington was the commander-in-chief of the Continental Army. And he led that inferior army to victory over the greatest military force in the world at the time: Great Britain. Afterward, Washington rebuffed a strong effort to inaugurate him as America’s king, and led the fledgling nation to embrace republican government instead. Washington presided over the Constitutional Convention that drafted the US Constitution. He was America’s first President. Washington’s Farewell Address formed the compass and rudder of America for at least the next hundred years and, in my opinion, is the greatest political address ever delivered on American soil. Without George Washington, there would be no America.

Remembering the Alamo by Chuck Baldwin

Please try to remember the heroes of the Alamo as you watch our gutless political and religious leaders surrender to globalism, corporatism, socialism, and political correctness. Try to recall the time in this country when ordinary men and women had the courage of their convictions and were willing to sacrifice their lives for freedom and independence. 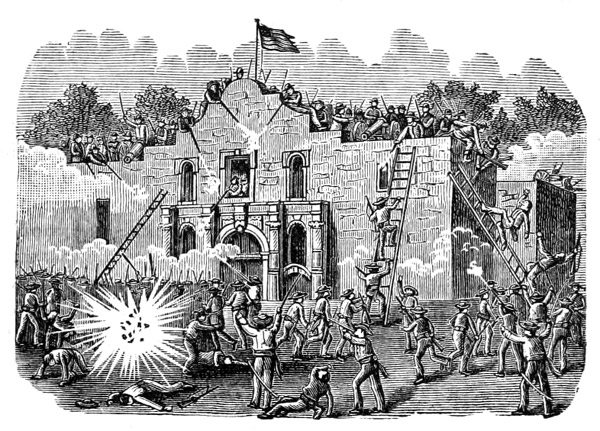 March 6 marks the anniversary of the fall of the Alamo back in 1836. For more than 13 days, 186 brave and determined patriots withstood Santa Anna’s seasoned army of over 4,000 troops. To a man, the defenders of that mission fort knew they would never leave those ramparts alive. They had several opportunities to leave and live. Yet, they chose to fight and die. How foolish they must look to this generation of spoiled Americans.

It is difficult to recall that stouthearted men such as Davy Crockett (a nationally known frontiersman and former congressman), Will Travis (only 23 years old with a little baby at home), and Jim Bowie (a wealthy landowner with properties on both sides of the Rio Grande) really existed. These were real men with real dreams and real desires. Real blood flowed through their veins. They loved their families and enjoyed life as much as any of us do. There was something different about them, however. They possessed a commitment to liberty that transcended personal safety and comfort.

Liberty is an easy word to say, but it is a hard word to live up to. Freedom has little to do with financial gain or personal pleasure. Accompanying Freedom is her constant and unattractive companion, Responsibility. Neither is she an only child. Patriotism and Morality are her sisters. They are inseparable: destroy one and all will die.

Early in the siege, Travis wrote these words to the people of Texas: “Fellow Citizens & Compatriots: I am besieged by a thousand or more of the Mexicans under Santa Anna. . . . The enemy has demanded a surrender at discretion, otherwise the garrison are to be put to the sword . . . I have answered the demand with a cannon shot & our flag still waves proudly from the walls. I shall never surrender or retreat. . . . VICTORY OR DEATH! P.S. The Lord is on our side. . . .”

Christians Feed Their Own to the Lions by Chuck Baldwin

I sat aghast as I watched the Republican Presidential debate in South Carolina and listened to hundreds of the GOP faithful (which included a great number of Christians) boo Congressman Ron Paul when he injected the Golden Rule into the discussion of America’s foreign policy. To say I was stunned is the understatement of the year!

I sat aghast as I watched the Republican Presidential debate in South Carolina and listened to hundreds of the GOP faithful (which included a great number of Christians) boo Congressman Ron Paul when he injected the Golden Rule into the discussion of America’s foreign policy. To say I was stunned is the understatement of the year! Christians booing a Presidential candidate (who, himself, is a Christian) for suggesting that our country practices the Golden Rule? Egad! What’s next? Christians cheering when people are thrown to the lions? I confess that I am flummoxed beyond words to describe!

“Ladies and Gentlemen, we do not need to elect more Christians to public office. We need to elect men and women who will obey their oath of office to defend, support and protect the Constitution of the United States of America.” Chuck Baldwin