Facing Months in the Dark, Ordinary Life in Puerto Rico Is ‘Beyond Reach’

Posted on September 25, 2017 by ifnm| Comments Off on Facing Months in the Dark, Ordinary Life in Puerto Rico Is ‘Beyond Reach’ 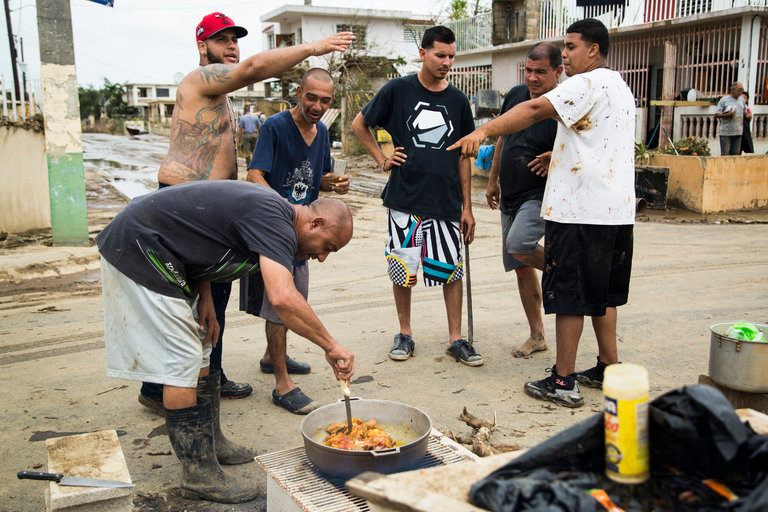 Two days after Hurricane Maria flattened this island of 3.5 million people, knocking out all its power and much of its water, the rebuilding of the services and structures needed for people to resume some semblance of ordinary life was looking more complicated by the day.

All or part of three towns in the northwestern part of the island — Isabela, San Sebastián and Quebradillas — were being evacuated Friday because of fears about structural damage to the nearby Guajataca Dam. Close to 70,000 people could be affected if the 90-year-old dam, which is 120-feet high and can hold about 11 billion gallons of water, collapsed, said Puerto Rico’s governor, Ricardo Rosselló.

And with everyone from the governor of Puerto Rico to the mayor of San Juan predicting that it could take four to six months to resume electrical service, people were contemplating empty refrigerators, campfire cooking, bathing in their own sweat and perhaps wrangling for fresh water on an island accustomed to hard times but nothing like what the future may bring.

“It’s been hard to see infrastructure deteriorate in Puerto Rico, but it has been harder to meet citizens who have lost it all,” Governor Rosselló said.

Comments Off on Facing Months in the Dark, Ordinary Life in Puerto Rico Is ‘Beyond Reach’

For years, engineers have warned that Houston was a flood disaster in the making. Why didn’t somebody do something?

Posted on September 4, 2017 by ifnm| Comments Off on For years, engineers have warned that Houston was a flood disaster in the making. Why didn’t somebody do something?

“It is naturally prone to flooding,” said Don Riley, the former chief of the Army Corps of Engineers civil works division. “People have built in this massive flood plain. They have to understand that.” 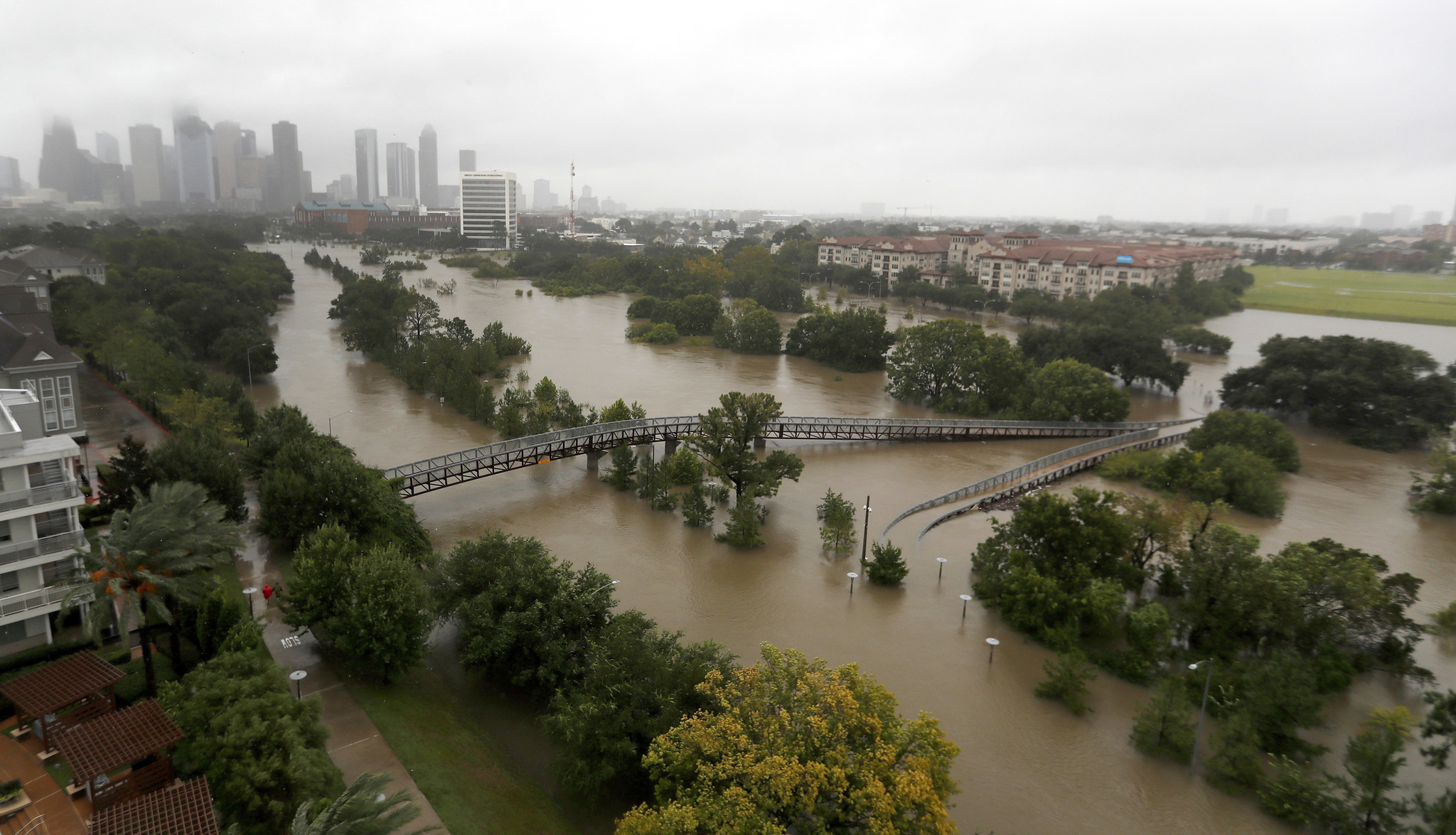 Houston is built on what amounts to a massive flood plain, pitted against the tempestuous Gulf of Mexico and routinely hammered by the biggest rainstorms in the nation.

It is a combination of malicious climate and unforgiving geology, along with a deficit of zoning and land-use controls, that scientists and engineers say leaves the nation’s fourth most populous city vulnerable to devastating floods like the one caused this week by Hurricane Harvey.

“Houston is very flat,” said Robert Gilbert, a University of Texas at Austin civil engineer who helped investigate the flooding of New Orleans after Hurricane Katrina. “There is no way for the water to drain out.”

Indeed, the city has less slope than a shower floor.

Harvey poured as much as 374 billion gallons of water within the city limits, exceeding the capacity of rivers, bayous, lakes and reservoirs. Experts said the result was predictable.

The storm was unprecedented, but the city has been deceiving itself for decades about its vulnerability to flooding, said Robert Bea, a member of the National Academy of Engineering and UC Berkeley emeritus civil engineering professor who has studied hurricane risks along the Gulf Coast.

Comments Off on For years, engineers have warned that Houston was a flood disaster in the making. Why didn’t somebody do something?

Farmer: Obama Lied to Me About Water, Drought

Posted on March 25, 2016 by ifnm| Comments Off on Farmer: Obama Lied to Me About Water, Drought

A Central Valley farmer with whom President Obama met and posed for photo-ops in 2014 is slamming the White House’s new water plan, saying he was misled about Obama’s intention to listen to farmers’ demands for water. “I did have a sense of hope and he could have helped us,” Joel Del Bosque told local ABC News affiliate KFSN 30. “My focus was just telling him what we do we grow food for the country and we can’t do it without water.”

Instead, however, President Obama’s eight-page “executive action” plan on water, released Tuesday, says nothing at all about increasing farmers’ access to water. Instead, it calls for data collection, communication by federal agencies, new research, and papers — in other words, more bureaucratic activity, rather than more water storage or water allocations.

In observance of World Water Day on Tuesday, the White House convened what was billed as a “first-of-its-kind” summit on water. The meeting, which the Fresno Bee reports was attended by California Democrats including Rep. Jerry McNerney and Rep. Jared Huffman, focused on water conservation — but did not address the fact that the federal government prioritizes the endangered delta smelt fish over the needs of farmers, often flushing out hundreds of thousands of acre-feet to sea.

California’s Republicans, who back a water bill that is stuck in the U.S. Senate, did not attend.

Comments Off on Farmer: Obama Lied to Me About Water, Drought

The US Department of Justice has been considering whether people should be prosecuted for the offense of climate change denial. “This matter has been discussed. We have received information about it and have referred it to the FBI to consider whether or not it meets the criteria for which we could take action on,” said Attorney General Loretta Lynch, responding to a question from green activist Sen. Sheldon Whitehouse at a Senate Judiciary Hearing.

Perhaps the kind of RICO action Whitehouse has in mind is similar to the one proposed to President Obama a few months ago by a number of key climate scientists, led by one Jagadish Shukla of George Mason University.

Tony Heller at Real Science blog is countering the National Oceanic and Atmospheric Administration’s claim that 2015 was the “hottest year ever” and accusing them of suppressing data that would show that the Earth in fact hasn’t experienced any warming over the last 58 years.

Radiosonde data that was referenced during NOAA’s recent press briefing on climate change showed only the last 37 years in the graph, according to Heller. And he gives a clue as to why:

The earlier data showed as much pre-1979 cooling as the post-1979 warming.

So, Heller explained that he combined the two graphs at the same scale and found that the earth’s atmosphere “has not warmed at all since the late 1950s.”

“The omission of this data from the NOAA report, is just their latest attempt to defraud the public,” Heller states. “NOAA’s best data shows no warming for 60 years.”

“But it gets worse,” he adds. “The graph in the NOAA report shows about 0.5C warming from 1979 to 2010, but their original published data shows little warming during that period.”

Other charts included on the Real Science blog shows how much the NOAA has altered temperature data to show an increase in temps and therefore “prove” global warming. But Heller has called them out:

Comments Off on Claim: Earth Hasn’t Warmed for Last 58 Years The Pope, in his speech at the White House, said climate change is “a problem which can no longer be left to a future generation.”

Trump was asked during his interview if he agreed with the Pope on climate change.

“I think that clean air is a pressing problem. You want to have clean air, clean water. That’s very important to me, and I’ve won many environmental awards. I am not a believer in climate change,” Trump stated.

Politico reported on Trump’s statement, and added, “The National Oceanic and Atmospheric Association announced last week that 2015 was the hottest summer on record and predicted that there is a good chance that this year could eclipse last year as the hottest ever recorded.”

Posted on September 14, 2015 by ifnm| Comments Off on Growing El Niño May Launch Huge Latino Migration to U.S.

The Pacific El Niño weather pattern will likely provide rain to Texas and California, but worsen the current drought in southern America, and perhaps send a tsunami of poverty-stricken peasants northwards into the United States. The U.S. National Weather Service announced there is now a 95 percent probability that the potentially most powerful El Niño on record will continue through the Northern Hemisphere during the winter of 2015-16, and only gradually weaken in the spring of 2016.

The regions’ dry conditions from May through September appear to have damaged roughly half of the corn and a significant amount of the bean harvests. The prices of basic food staples rose 40 percent in some areas in 2014.

Comments Off on Growing El Niño May Launch Huge Latino Migration to U.S.

Posted on June 12, 2015 by ifnm| Comments Off on Jerry Brown Worries About ‘Overpopulation’ Amid California Drought

“One more year [like the previous two] and nobody will have anything,” California Rep. Devin Nunes warned.

Gov. Jerry Brown is worried that the Golden State will eventually have too many people for the state’s water supplies to support.

Brown made the comments before the Metropolitan Water District of Southern California Board and also warned that global warming was exacerbating California’s drought.

"At some point, how many people can we accommodate? " asks @JerryBrownGov abt CA's future at MWD #cawater meeting. pic.twitter.com/r0vEui1uxh

California’s four-year drought has put huge strains on the state’s water supplies and forced a public discussion on state water infrastructure and how officials allocate water rights. Gov. Brown has imposed draconian water restrictions in the hopes he can cut water use of metropolitan areas across the state.

Comments Off on Jerry Brown Worries About ‘Overpopulation’ Amid California Drought

Here’s what celebrities’ lawns look like during California’s drought

Posted on May 11, 2015 by ifnm| Comments Off on Here’s what celebrities’ lawns look like during California’s drought

“We’re right up there with Beverly Hills,” said one official who estimates 70 percent of the district’s water is going to the lawn maintenance of about 100 manicured estates. “And that means we have to get the A-listers on the bus.”

As these aerial photos from The Post prove, Hollywood celebrities like Kim Kardashian, Barbra Streisand and Jennifer Lopez continue to suck up water to keep their gardens fresh and lawns green, while Southern California withers from a devastating drought.

Experts predict California reservoirs have less than a year’s worth of drinking water left. An emergency law passed last week forces local cities to conserve water immediately. The Las Virgenes Municipal Water District, which supplies many of these elite enclaves north of Los Angeles, will have four weeks starting next month to cut water use by a staggering 36 percent. But the mandate is toothless, with the maximum fine a paltry $100.

“We’re right up there with Beverly Hills,” said one official who estimates 70 percent of the district’s water is going to the lawn maintenance of about 100 manicured estates. “And that means we have to get the A-listers on the bus.”

The Next Crime Wave in Farm Country: Stealing Water

Posted on April 14, 2015 by ifnm| Comments Off on The Next Crime Wave in Farm Country: Stealing Water

The Madera County Task Force also plans to educate farmers about the best kinds of fences and tank enclosures to keep out water thieves.

Madera County sits smack in the middle of the state, and it’s mostly farms. As in many parts of the Valley, wells have gone dry here and water prices have soared. Thieves, who’ve been increasingly targeting rural farms, are starting to understand that anything water-related is a potential bonanza.

“They’re taking the water hoses, taking the copper wiring,” says the county’s District Attorney, David Linn. “We’ve even had instances where they’ve come in and stolen the water pumps from the farmers.”

Linn has recently launched a new task force so rural residents and farmers can reach a deputy district attorney 24-7 to report crime, including illegal well drilling.

Linn says a hypothetical call might be, “You know over the past two weeks, the water flow on my kitchen sink has continued to decrease. I notice there’s a couple of big drill rigs across the road, looks like they’re very active.”

An investigator could come out and talk with the well driller to make sure they’re drilling where they should be.

Comments Off on The Next Crime Wave in Farm Country: Stealing Water