Posted on October 18, 2016 by ifnm| Comments Off on Sheriff Arpaio Mobilizes Armed Posse on Streets and at Malls (Video)

I am mobilizing my volunteer armed Posse members to partner up with my deputies while on patrol. You can learn more by watching the video and reading the press release attached. In an atmosphere where law enforcement personnel are being targeted by ever growing anti-police hostility, as seen by the shooting of police officers in St. Louis County, Palm Springs, California, Boston and San Francisco in the last two weeks, Sheriff Joe Arpaio believes that the time to turn the tide of the rise of line of duty deaths is here. Sheriff Arpaio has mobilized his volunteer armed posse to aid front-line deputies and will have them ride with deputies as they patrol our towns and cities.

In May, Maricopa County Sheriff’s Deputy Brian Wisda was shot multiple times during a traffic stop by a suspect who was angered for being stopped the day before. Deputy Wisda survived his wounds and is recovering. Later that same month, another suspect shot at a deputy as he was entering a Maricopa County Sheriff’s Office substation in Surprise, leaving a slew of bullet holes in the substation door.

“The war on cops must end,” continued Sheriff Arpaio “It is imperative that the first line of defense in this country against crime – the cop in America, be protected while protecting us.”

Posted on September 1, 2016 by ifnm| Comments Off on Everyday Heroes of the Maricopa County Sheriff’s Office (Video)

“Local law enforcement officers are the first line of defense protecting our great Republic, our neighborhoods, the weak, and the poor.” Chief Deputy Jerry Sheridan

Pro-amnesty activists led by the former chairman of La Raza and the director of the Puente Movement organized a boycott in front of a local Arizona tire store after they posted signage supporting pro-Donald Trump Maricopa County Sheriff Joe Arpaio, who is running for re-election. Daniel Ortega, who previously chaired the board of directors for the controversial pro-amnesty organization, La Raza, fronted the protests outside a Discount Tire store in the area, simply because the business posted a sign supporting Arpaio.

Ortega said the support for Arpaio by the local tire store was a “slap in the face” to the Hispanic community, according to NBC News.

“The owners of Discount Tire have the right to support who they want, but to display their support understanding what Sheriff Arpaio has done to our community is totally insensitive and inconsiderate,” Ortega said.

“How can you ignore what Sheriff Joe Arpaio has done to our community and still expect us to do business there?” Ortega added.

Ortega said he hoped the boycott would silence businesses from publicly supporting Arpaio, saying he wants the “backlash” to send a “message to other businesses where Latinos spend their dollars about how to deal with their politics in the future.” 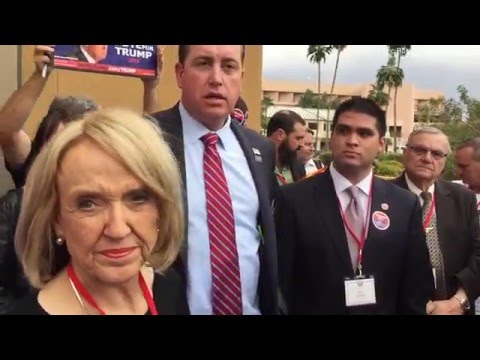 Maricopa County Sheriff Joe Arpaio is using money from the sale of seized crime scene guns to buy $140,000 in ammunition and radios for his volunteer posse. The total garnered from the sale–$257,443–is being divided between the ammunition purchase and a $102,656 purchase of radios for the posse as well.

My posse responds to situations that could be life-threatening. They need to be ready to protect themselves, the deputies they are supporting, and any innocent bystanders in potentially violent situations. Because law enforcement is not getting full support from the highest levels of the federal government, we have a widespread war on cops throughout the country. Being prepared for a hostile criminal element is crucial.

On April 6 Breitbart News reported that Sheriff Arpaio launched a new program to help another often overlooked group–incarcerated veterans. His new program pairs a jailed veteran with a dog from the MCSO Mash Unit for a period of time every Wednesday, thereby giving veterans an opportunity to form a bond with the animals in hopes of relieving struggles associated with Post Traumatic Stress Syndrome and similar issues.

Comments Off on Sheriff Joe Arpaio Sells Seized Guns to Buy $140,000 in Ammo for Armed Posse

Posted on April 14, 2016 by ifnm| Comments Off on Clinton’s call for new immigration office draws fire

“It’s a disaster. Another federal agency? We ought to cut out half of them.” Sheriff Joe Arpaio slammed Hillary Clinton’s plan to create a new “Office of Immigrant Affairs” if elected president.

Hillary Clinton announced Wednesday she intends to create a new “Office of Immigrant Affairs” if elected president – a plan swiftly ripped by critics as a redundant piece of bureaucracy that might be better politics than policy.

The Democratic presidential primary front-runner briefly outlined the plan at a Manhattan event where she picked up the endorsement of the New York State Immigrant Action Fund, an advocacy group.

“I would create the first ever Office of Immigrant Affairs,” Clinton said. “[The office] would create a dedicated place in the White House to coordinate integration policies across the federal government and with state and local government as well.”

A Clinton aide told Fox News ahead of the announcement that the office will ensure that immigrants, refugees and their children are able to become fully integrated members of their communities and country.

Steve Choi, of the New York Immigration Action Fund, said at the event that the group supported the creation of the office as part of a broader push for helping immigrants in the U.S.

Posted on March 20, 2016 by ifnm| Comments Off on Sheriff Joe, Donald Trump: Protesters ‘Think They’re Going To Intimidate,’ ‘We’re Going To Be Heard’

GOP frontrunner Donald Trump held a campaign rally in Phoenix, Arizona Saturday afternoon at Fountain Park despite numerous blockades by protesters which were set up along the highway and roads leading to the event, causing traffic to be backed up for miles. “We had a little problem. Some demonstrators were trying to disrupt and because of them, you had to get a little more sunshine, but we made it,” he added.

Arpaio then said, “Three of them are in jail.”

The crowd cheered in response.

“They think they’re going to intimidate you and the next President of the United States,” Arpaio challenged. “Not going to happen.”

“There’s no games with your sheriff, that’s for sure,” Trump said, commenting on the protesters, after Arpaio introduced him. “We’re going to be heard,” he added, saying the silent majority isn’t so silent anymore.

Sheriff Joe: 39 Percent of Illegals Turned Over to ICE Return Back to Maricopa Co Jails (Video)

Posted on March 16, 2016 by ifnm| Comments Off on Sheriff Joe: 39 Percent of Illegals Turned Over to ICE Return Back to Maricopa Co Jails (Video)

But it’s very simple. You deport them and when you come across those here committing other crimes, you lock them up and send them back where they came from. And that can be done. So why should we surrender the greatest country in the world, we can’t take care of this problem? Tuesday on Fox Business Network’s “Mornings With Maria,” Maricopa County, AZ Sheriff Joe Arapaio discussed the problems with illegal immigrants committing crimes in his community and why he thinks Republican presidential front-runner Donald Trump is the best one to deal with this problem.

Arpaio also told host Maria Bartiromo of a statistic showing that over one-third of all the illegal immigrants he has incarcerated and turned over to Immigrations and Customs Enforcement wind up back in his jails.

ARPAIO: Well, you know, that’s been out for a while, but I have more shocking statistics that nobody will talk about except Neil Cavuto. He did bring it out.

BARTIROMO: Tell us about it.

ARPAIO: They are my statistics. I’ll tell you what it is, I also run the jails. We average about 9,000 people in the jails every day and every month they take statistics of those in our jails charged with all different crimes, here in this country illegally, 8,600 have been turned over to ICE for deportation and over 3000 keep coming back to the same jails that I run. Now, think of that. They keep coming back. One guy came back 20 times. So, what’s going on? Are they going to the border and keep hopping the fence or keep coming across or are they let out on the streets of Maricopa County? I think-

Comments Off on Sheriff Joe: 39 Percent of Illegals Turned Over to ICE Return Back to Maricopa Co Jails (Video)

Posted on March 7, 2016 by ifnm| Comments Off on Sheriff Joe: Country Should ‘Go Bananas’ That ‘Disgusting’ Ex-Mexican President Compared Trump to Hitler

Arpaio took aim at the U.S. government, saying Congress and other American officials only react to the “sensitivity about illegal immigration,” thus allowing former president Fox to stick “his nose into the election.”

The famous sheriff was interviewed for “Aaron Klein Investigative Radio,” broadcast on New York’s AM 970 The Answer and Philadelphia’s NewsTalk 990 AM.

Klein asked the Maricopa County sheriff what he thought of Fox’s remarks, made in an interview last week with CNN.

Disgusting. They are going after Trump over some KKK. Our own country, our own officials. Of course they will do anything to get him to feed it. But I want to know why. Here is the former president of Mexico calling Trump, a presidential candidate regardless of who the person is. These are people running for president in our country. He is sticking his nose into the election. Calling a candidate Hitler and everything else.

Posted on January 27, 2016 by ifnm| Comments Off on Sheriff Joe Arpaio endorses Trump for president

‘He produces results and is ready to get tough’ The man known as “America’s toughest sheriff” for his no-nonsense approach to law enforcement and his strong opposition to illegal immigration has endorsed Donald Trump for president.

Sheriff Joe Arpaio of Maricopa County, Arizona, whose endorsement was announced Tuesday afternoon by the Trump campaign, was the first to sue Obama over his 2014 administrative orders, which allowed another 4 or 5 million illegal aliens to remain in the United States.

When Trump announced his run for the White House, he took on Obama’s open-borders policy, calling for a wall to be built on the southern border.

In a statement about Arpaio’s endorsement, Trump said: “I have great respect for Sheriff Arpaio. We must restore law and order on the border and respect the men and women of our police forces. I thank him for his support of my policies and candidacy for president.”

Arpaio said: “Donald Trump is a leader. He produces results and is ready to get tough in order to protect American jobs and families. I have fought on the front lines to prevent illegal immigration.

Comments Off on Sheriff Joe Arpaio endorses Trump for president