Posted on December 3, 2017 by ifnm| Comments Off on Waylon Jennings – Good Hearted Woman

Posted on December 3, 2017 by ifnm| Comments Off on Steve King Pledges to Block ‘Every Form’ of Amnesty for Illegal Aliens in Kate Steinle’s Honor

Rep. Steve King (R-IA) says he will do his part in honoring 32-year-old Kate Steinle — whose illegal alien killer was acquitted of her murder — by blocking “every form” of amnesty that the GOP-led Congress attempts to push. After five-time deportee and seven-time felon illegal alien Jose Garcia Zarate, also known as Juan Francisco López-Sánchez, was not convicted of the murder of Steinle — despite previously admitting to shooting and killing the woman while she was walking on a pier with her father — King called the decision “Sickening!”

“The illegal alien who, no one disagrees, killed Kate Steinle is found NOT guilty in sanctuary city, San Francisco. Sickening!” King wrote.

King also vowed to oppose any amnesty for illegal aliens that the Congress may attempt to pass by the end of the year.

“I will spare no effort to do my own killing-of all amnesty in every form!” King continued.

The illegal alien who, no one disagrees, killed Kate Steinle is found NOT guilty in sanctuary city, San Francisco. Sickening! I? will spare no effort to do my own killing-of all amnesty in every form!

As Kate Steinle’s killer, to the joy of the Left, is found NOT guilty when NO ONE disagrees-he killed her! The death of Americans at the hands of illegals continues. Here another example: https://t.co/8QbXhQoz0v

Posted on November 5, 2017 by ifnm| Comments Off on King Calls Upon McConnell to Pass “No Sanctuary for Criminals Act” (Video)

Congressman Steve King calls upon Senate Majority Leader McConnell to move his House-passed legislation, the “No Sanctuary for Criminals Act” through the Senate. The bill would end funding for lawless Sanctuary Cities that undermine immigration law by refusing to cooperate with federal immigration authorities. American citizens are too frequently the victims of crime committed by illegal aliens who seek, and are provided, refuge in Sanctuary Cities.

Posted on September 30, 2017 by ifnm| Comments Off on The Danger of Amnesty | Rep. Steve King and Stefan Molyneux (Video)

With President Donald Trump’s approval, Speaker Paul Ryan has formed a task force to create legislation to grant amnesty to those impacted by the unconstitutional era Deferred Action for Childhood Arrivals program (DACA) program. Congressman Steve King joins Stefan Molyneux to discuss how President Trump’s actions have strayed from his campaign promises, the immense danger of amnesty, the importance of culture and the demographic future of the United States of America.

Comments Off on The Danger of Amnesty | Rep. Steve King and Stefan Molyneux (Video)

“We’ve got to put America back to work. This administration will do it. And we’ve got to let — we’ve got to free them up so that they can and support the right agenda for this country.”

Wednesday on CNN’s “New Day,” Rep. Steve King (R-IA) was asked by show co-host Alisyn Camerota if he was “comfortable” holding up funding for the federal government if it did not include money for the border wall.

King said that he was, but suggested taking it a step further by adding money earmarked for food stamps and Planned Parenthood to fund the wall.

CAMEROTA: And it’s $1.6 billion. I mean, that’s what might be holding up, you know, the funding for the government. But are you comfortable, Congressman, with providing $1.6 billion of taxpayer money, not from Mexico, to build that wall?

KING: Absolutely yes, and more, and I’d throw another $5 billion on the pile and I would find a half of a billion dollars of that right out of Planned Parenthood’s budget. And the rest of it could come out of food stamps and the entitlements that are being spread out for people that haven’t worked in three generations.

Posted on June 16, 2017 by ifnm| Comments Off on Rep. Steve King: Violence Appearing in Streets, ‘Coming From the Left’

Rep. Steve King (R-IA) blasted the angry left on Wednesday at the scene of a shooting earlier in the day that wounded House Majority Whip Steve Scalise (R-LA), an aide, and two Capitol Police. “America has been divided,” King said, according to the Washington Post. “And the center of America is disappearing, and the violence is appearing in the streets, and it’s coming from the left.”

Asked whether the shooting was politically motivated, he said he did not know why the gunman did what he did.

However, King pointed at anger and demonstrations against Trump, according to the Post:

King, in his remarks at the shooting scene, said it was impossible to separate the hyperpartisan climate in Washington — especially people protesting Trump — with Republican members of Congress being fired upon at a baseball practice.

“The divisions within the country, people that can’t accept the results of the election that are determined to try to take this country down, take this organization down,” he said. “This city was filled up with demonstrations the day after the inauguration, where you couldn’t drive down the streets. And we’ve had demonstrations every week since then, sometimes different topics.”

Comments Off on Rep. Steve King: Violence Appearing in Streets, ‘Coming From the Left’

Posted on April 3, 2017 by ifnm| Comments Off on What Rep. Steve King’s “Racist” Statements Teach

In other words, there’s a class of people for whom no identity is permitted. They’re the people of Europe and the Anglo-sphere: the English, the Americans, the Canadians, Australians and New Zealanders.

Rep. Steve King walked back his remarks with ease. King had told Iowa radio host Jan Mickelson that “we can’t restore our civilization with somebody else’s babies.” The Republican congressman quickly reframed the comments. It was not race he was alluding to, but “our stock, our country, our culture, our civilization.” Those sound like proxies for race.

More instructive than what Rep. King said or meant to say are the lessons about what we’re not supposed to say.

We dare not suggest that a civilization created by a particular people with a particular religious and racial profile, may well perish once those people are replaced or have engineered their own replacement.

America’s historical majority may not entertain or express a natural affinity for its own. A connection to kith, kin and culture, when expressed by whites, is considered inauthentic, xenophobic, and certainly racist.

Comments Off on What Rep. Steve King’s “Racist” Statements Teach Posted on March 16, 2017 by ifnm| Comments Off on Gavin McInnes: Steve King is right (Video) 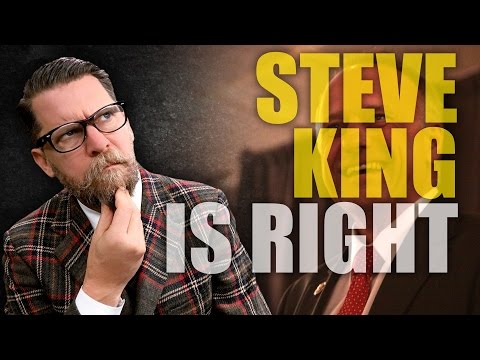 Comments Off on Gavin McInnes: Steve King is right (Video)

Posted on November 17, 2016 by ifnm| Comments Off on ‘I Challenge You…’ — Congressman Blows A Hole In MSNBC Host’s ‘We’re A Country Of Immigrants’ Argument (Video)

During a Wednesday morning interview on MSNBC, Rep. Steve King pointed out an obvious flaw in one of Democrats’ favorite immigration talking points. King and MSNBC’s Stephanie Ruhle had been discussing King’s qualifications to possibly serve in Trump’s cabinet.

King noted that his tenure serving on the House Judiciary Subcommittee on Immigration and Border Security would qualify him to serve as Secretary of Homeland Security and proceeded to state that the U.S. needs to prioritize an immigration system that preserves “the American culture, the American civilization and the American dream.”

“Eventually we need to get the assimilation in place so that we could have cultural continuity on top of that.”

Ruhle countered by arguing that such a line of reasoning could have theoretically been used by Native Americans to prevent European colonization, adding that America is a “country of immigrants.”

Ruhle again tried to one-up King, stating that “Greece is not a country of immigrants.”

King had the perfect response.