Posted on May 12, 2020 by ifnm| Comments Off on Economist Blasts The Fed, Stimulus, Bitcoin & Makes Bold Predictions (Video)

Peter Schiff, Financial commentator and economist has a virtual sit-down with Patrick Bet-David.

Why are so many people upset about plans to raise and remove the United States debt ceiling and why was it created in the first place? Peter Schiff joins Stefan Molyneux to discuss the history of the debt ceiling, the consequences of eliminating it, shocking U.S. debt interest payments, the U.S. dollar losing 12% of it’s value since the start of the year, outrage over price gouging during the recent hurricanes, the value of a college degree and America’s economic future.

Posted on May 7, 2016 by ifnm| Comments Off on Peter Schiff Speaks on Trump (Video)

Comments Off on Peter Schiff Speaks on Trump (Video) Peter Schiff believes that his father’s fight against the IRS is hopeless and unwise. He tried to convince his dad that there is a better way to fight the battle against, in his view, excessive government interference in our lives and the economy.

I was surprised that the Ninth Circuit’s decision, last month, on Irwin Schiff’s appeal of his conviction and sentence did not attract more attention. Irwin Schiff could well be viewed as the grandfather of the contemporary tax protester movement. According to wikipedia:

A tax protester is someone who refuses to pay a tax on constitutional or legal grounds, typically because he or she claims to believe that the tax laws are unconstitutional or otherwise invalid.

Irwin Schiff was appealing his conviction and sentence of 151 months for conspiracy, aiding in the filing of false income tax returns and failing to pay income tax. His appeal was based on ineffective assistance of counsel at his first appeal (He represented himself at the original trial). The Ninth Circuit cut him no slack, so based on his current projected release date, the next birthday that Irwin Schiff can celebrate in freedom will be his ninetieth. Video – Obama Supporters on Climate Bill Costs: No Thanks!

Inauguration Day 2013: While Peter was out of the country, his producer, Tom Elliott, hit up the inauguration to speak with Obama’s most die-hard fans about the big-ticket item the president outlined for his second term: climate change. While everyone likes the idea of “fixing” the climate, how many would support actually paying the legislative cost? Keep in mind, these inaugural attendees traveled from all over the country; if Obama can count on anyone, surely he can count on their support — right? 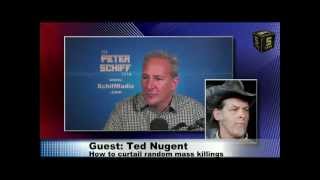 Peter Schiff: Is a college degree worth the cost? You decide. (Video)

President Obama promotes the myth that everyone must go to college. That if you don’t go, your life will be ruined — that you will end up waiting tables, or trapped in some other mundane occupation. The truth is, even with a college degree, you may still end up waiting tables, you’ll just begin your “career” four or five years later, tens of thousands of dollars in debt.

The Real Fiscal Cliff: How to Spot the Ledge – Peter Schiff (Video)

“They deliberately want to reflate the housing bubble, which I though, number 1, is interesting, because it’s kind of an admission that they’re to blame for the last one, because they basically said we want to use artificially low interest rates to stimulate housing, to make housing prices go up, to make people feel richer so they’ll spend money they don’t have. That’s what happened last time!” Peter Schiff