Posted on September 17, 2016 by ifnm| Comments Off on Ford just latest in long line of off-shore deals

American industry ‘packed up and left en masse’ since NAFTA.

Ford Motor Co. says it plans to move its entire small-car operation to Mexico over the next two years, the type of below-the-belt punch to American workers that Donald Trump says he won’t allow to happen if he gets elected president.

Ford, meanwhile, assured its workers they would not lose their jobs because it will be expanding its large-car operations in Michigan, a familiar refrain that some aren’t buying, saying the larger trend is for auto-manufacturing to go north and south of the border – thanks to NAFTA and a new “free-trade” deal that’s brewing in Washington.

“This isn’t exactly new, but it is jarring news for many,” the Detroit Free Press reports. “Ford said in April it would spend $1.6 billion to build a new plant in Mexico and will build small cars in that plant and said last year it would end production of the Ford Focus and Ford C-Max in Wayne [Michigan] in 2018.”

Trump, the Republican nominee for president, immediately weighed in on the announcement, saying he would stop these types of off-shoring deals by ending 23 years of unfair trade agreements that sell off American jobs to Mexico and Canada.

And it’s not just Ford. Comments Off on Former Mexican President to Trump: ‘NAFTA Is a Miracle’

Will the GOP capitulate again on ‘free trade’? by Pat Buchanan

Posted on February 22, 2015 by ifnm| Comments Off on Will the GOP capitulate again on ‘free trade’? by Pat Buchanan “Free trade results in giving our money, our manufactures, and our markets to other nations,” warned the Republican senator from Ohio and future President William McKinley in 1892.

“Thank God I am not a free-trader,” echoed the rising Empire State Republican and future President Theodore Roosevelt.

Those were the voices of a Republican Party that believed in prospering America first.

For a quarter century, however, the party of the Bushes has been a globalist, New World Order party, and fanatically free trade.

It signed on to NAFTA, GATT, the World Trade Organization, most-favored-nation status for China, CAFTA and KORUS, the U.S.-Korean trade treaty negotiated by Barack Obama.

So supportive have Republicans been of anything sold as free trade they have agreed to “fast track,” the voluntary surrender by Congress of its constitutional power “to regulate commerce with foreign nations.”

Comments Off on Will the GOP capitulate again on ‘free trade’? by Pat Buchanan

Posted on February 13, 2015 by ifnm| Comments Off on Riverside: Working people get ‘short end,’ ex-labor chief says at UCR

“I would have fought harder to get a better deal for American workers under the North American Free Trade Act,” Reich said, prompting a round of applause. “I think that a lot of jobs were lost. A lot of jobs were lost to Mexico and to China, although China is not part of the North American Free Trade Act. But I think that our trade deals, like the deal that’s being cooked up, the Trans-Pacific Partnership, are not helping the poor and working class and a lot of middle class in America.

Reich made a brief trip to Inland Southern California to attend a screening of a 2013 documentary about his economic views called “Inequality for All.”

The screening, which was free and open to the public, drew a capacity crowd with a standby line to the University Theatre on campus.

Reich, who served in President Bill Clinton’s first administration, is now a senior fellow at the Blum Center for Developing Economies at UC Berkeley

He was also in Riverside for the announcement of a partnership of the Blum Center with UCR’s School of Public Policy on an initiative to study local and global poverty.

Reich advocates for wage earners in the film, which traces what Reich calls the decline of the middle class since the 1970s due to such factors as loss of manufacturing jobs, wage stagnation and a tax structure that favors investors over workers.

How to Pass Disastrous Trade Agreements

Posted on February 8, 2015 by ifnm| Comments Off on How to Pass Disastrous Trade Agreements

The big push is on. The “Obama­ Trade Express” is taking off. With the help of Republicans as well as Democrats, Obama is bound and determined to get “fast track” Trade Promotion Authority, followed by disastrous trade deals that have been called “NAFTA on steroids”!

We need to work together on tools like bipartisan trade promotion authority.”
— President Barack Obama, State of the Union Address, January 20, 2015

“The president made very clear last night that TPA [Trade Promotion Authority] and TPP is now a top presidential priority and now is the time to get it done.”
— top White House aide Evan Medeiros, in remarks at the Brookings Institution, January 21, 2015

The big push is on. The “Obama­Trade Express” is taking off. With the help of Republicans as well as Democrats, Obama is bound and determined to pass the Trans-Pacific Partnership (TPP) and the Transatlantic Trade and Investment Partnership (TTIP), both of which are officially termed “free trade agreements,” though they do not propose merely to set uniform low tariffs and allow trade to happen.

Opponents of these two agreements often refer to them as “NAFTA on steroids,” which is an appropriate moniker in several ways. One, like the North American Free Trade Agreement, they are likely to devastate employment and wages in the United States and exacerbate bad environmental outcomes in the name of free trade. Two, like NAFTA, participating congressmen and international corporations will put a full-court press on reticent Americans and politicians to pass these agreements on the “fast track.”

Comments Off on How to Pass Disastrous Trade Agreements

Look Who’s Arriving on the NAFTA Train by Phyllis Schlafly

How were these desperately poor people able to travel the distance of more than a thousand miles from their homes in Honduras, Guatemala and El Salvador to the U.S. border? The answer, apparently, is that they were allowed to hitch a ride on the NAFTA train that is owned and operated by an American company traded on the New York Stock Exchange, Kansas City Southern Rail Network.

Do you remember when President George W. Bush, in 2005, held a summit meeting with the “three amigos” to promote the free movement of people and goods across our borders with Canada and Mexico? The Council on Foreign Relations then spoke of “building a North American community” with a common “security perimeter” and “labor mobility” among our three countries.

Texas planned to build a massive North American Free Trade Agreement superhighway that would begin at its southern border with Mexico and eventually reach northern U.S. cities. The Kansas City Southern Railway bought a Mexican railroad and began branding it as the NAFTA railroad, with the goal of carrying Chinese products from Mexico’s Pacific Port of Lazaro Cardenas all the way to Kansas City, Missouri.

The prospect of an economic union with Mexico, which could eventually become a North American Union modeled on the European Union, rightly alarmed many Americans. Texas Gov. Rick Perry was forced to abandon his NAFTA superhighway, and President Barack Obama quietly removed Bush’s Security and Prosperity Partnership of North America from the White House website.

But the NAFTA railroad, now called the Kansas City Southern de Mexico, is up and running. Thanks to the exclusive reporting of Dr. Jerome Corsi at WorldNetDaily, we learn that this train is now playing a major role in bringing tens of thousands of young Central American immigrants into our country illegally.

Before writing the CFR piece touting the end of U.S. sovereignty, Petraeus teamed up with Michael O’Hanlon, a senior fellow at the globalist Brookings Institution, to advance the same narrative in the Washington Post. “With all of these advantages, together with our North American Free Trade Agreement (NAFTA) partners, the energy-rich and economically dynamic Canada and Mexico, we could be on the threshold of the New North American Decades,” the duo wrote in an April, 2013, opinion piece. Mexico’s corrupt and dysfunctional economy, of course, is rarely described as “dynamic” by serious observers.

Former general and CIA chief David Petraeus (shown), a key figure in the globalist Council on Foreign Relations and the shadowy Bilderberg network, boasted at a recent conference that the United States of America is set to be merged into the continental regime being erected under the North American Free Trade Agreement (NAFTA). Speaking at the Margaret Thatcher Conference on Liberty last week in London, the ex-commander of U.S. forces in Afghanistan and Iraq essentially celebrated the end of U.S. independence — and by extension, the demise of the Constitution.

The TPP represents the latest attempt of the globalists in the Washington ruling elite to greatly expand the power and reach of 20-year-old NAFTA, the North American Free Trade Agreement. Following the example of the European Union, they are pursuing a twin path of “broadening and deepening.” 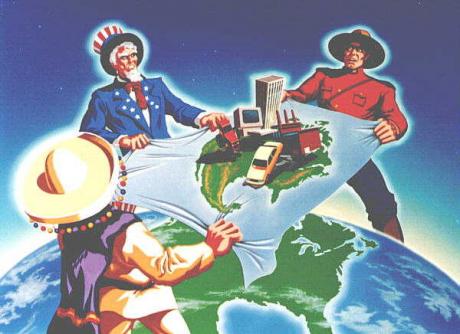 President Obama’s February 19 meeting in Toluca, Mexico, with Canadian Prime Minister Stephen Harper (right) and Mexican President Enrique Peña Nieto (center) did not produce any big, headline-grabbing breakthroughs, but that does not mean that it didn’t lay new ground for political and economic integration of the three nations. In fact, in their Joint Statement issued at the conclusion of the summit, the three leaders affirmed their commitment to a number of initiatives, many of which are already far developed, including approval of the Trans-Pacific Partnership (TPP), the “trade” agreement that is stirring widespread opposition in all three countries.

The controversial TPP is evoking broad-spectrum hostility particularly because of the total secrecy under which it has been crafted; while the American public and even the U.S. Congress have been kept from seeing the text, privileged corporations and NGOs have been given full access to the negotiated documents. The portions of the agreement that have been publicly leaked have confirmed that it poses a serious threat to national sovereignty, both from international institutions (such as the United Nations and the WTO) as well as multi-national corporations. The Joint Statement unequivocally endorses the TPP, declaring:

We seek to set new standards for global trade through the prompt conclusion of a high standard, ambitious, and comprehensive Trans-Pacific Partnership.

Now Korea Is Cleaning Our Clock by Patrick J. Buchanan “The entry into force of the U.S.-Korea trade agreement on March 15, 2012, means countless new opportunities for U.S. exporters to sell more made-in-America goods, services and agricultural products to Korean customers — and to support more good jobs here at home.”

Thus did the Office of the U.S. Trade Representative rhapsodize about the potential of our new trade treaty with South Korea.

And how has it worked out for Uncle Sam?

Well, courtesy of Martin Crutsinger of The Associated Press, the trade figures are in for April, the first full month under the trade deal with South Korea.

Pat Buchanan talks about manufacturing and free trade in the U.S. He also explains the consequences of NAFTA and the productivity of jobs.