Posted on August 16, 2016 by ifnm| Comments Off on Sheriff David Clarke Comments on Milwaukee Violence (Video)

“These are slimy, slimy people,” Clarke said of Black Lives Matter activists. “They reinforce my thesis that this is a hateful ideology, a dangerous ideology. It needs to be opposed wherever it is.” Noting that anti-police DNC protesters acted aggressively toward law enforcement and shouts of “Black Lives Matters!” interrupted a moment of silence for fallen officers, Clarke said that Democrats are enabling this “hateful ideology.”

“Donald Trump is the law and order candidate” Sheriff David Clarke has denounced the speakers at this year’s Democratic National Convention, saying they have “embraced criminality.”

Appearing on Fox News, Clarke stated that the DNC’s embrace of the terrorist organization “Black Lives Matter” and the mother of Michael Brown proves they have now endorsed lawlessness.

“Donald Trump is the law and order candidate, and this DNC seems to be about embracing criminality and cr iminal behavior, trying to mainstream criminal behavior, hold these individuals up as if they’re martyrs of the civil rights movement,” said Clarke told Megyn Kelly before going onto say that the deaths of Michael Brown and Eric Garner were justified because they were “resisting arrest.”

Repeating some of his talking points at the RNC just last week, Clarke attributed this disastrous breakdown of law and order to a breakdown in fatherhood.

Graphic Quotes: Sheriff David Clarke on What Needs to Be Fixed

Posted on July 12, 2016 by ifnm| Comments Off on Graphic Quotes: Sheriff David Clarke on What Needs to Be Fixed

Comments Off on Graphic Quotes: Sheriff David Clarke on What Needs to Be Fixed

“It’s time for this nation to stand up with one voice and condemn and shun this movement called Black Lives Matter.” Sheriff David Clarke

Posted on June 5, 2016 by ifnm| Comments Off on Sheriff David Clarke On Violent Anti-Trump Protests (Video) 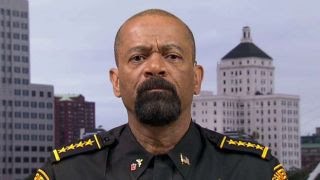 Sheriff Clarke: Pro-Immigration Protesters Against Trump Are ‘A Conglomeration of Misfits’ (Video)

Posted on March 19, 2016 by ifnm| Comments Off on Sheriff Clarke: Pro-Immigration Protesters Against Trump Are ‘A Conglomeration of Misfits’ (Video)

While “the liberal mainstream media is nothing more than a propaganda wing for the Democrat Party,” said Clarke, “I identified these individuals for who they really are well over a year ago. I call them anarchists.” Pro-immigration protesters are planning to rally today against Donald Trump in Phoenix and New York, just one week after violent brawls with liberal activists shut down the presidential candidate’s rally in Chicago.

For those coming out today, Sheriff David Clarke says he knows what their intentions really are.

“Let’s not misidentify this,” he said on Fox and Friends Weekend. “This is a rebellion.”

Comments Off on Sheriff Clarke: Pro-Immigration Protesters Against Trump Are ‘A Conglomeration of Misfits’ (Video)