Posted on August 30, 2021 by ifnm| Comments Off on Paracas Elongated Skulls Of Peru: The DNA Results, Morphological Anomalies, And Blood Type Surprises (Video)

In Peru, Another Near Miss for Latin American Liberty

Posted on April 23, 2021 by ifnm| Comments Off on In Peru, Another Near Miss for Latin American Liberty

“Migrating within Latin America is like moving from one cabin to another while inside the Titanic.”

On June 6, Peruvians will elect their next president. At the moment, the favorite to win is Pedro Castillo, a previously obscure teachers union leader who won the first round with 19 percent of the vote.

Castillo’s government program describes the “Free Peru” movement he leads as Marxist-Leninist, quotes Karl Marx and Friedrich Engels, and praises the legacies of Vladimir Lenin and Fidel Castro. It also calls for the abolition of the current constitution and the creation of a constitutional assembly, for the nationalization of “strategic sectors” of the economy, for the “regulation” of the free press, and for central economic planning under an “inverventionist…innovative, entrepreneurial, and protective state.” In recent days, Castillo has promised to expel all illegal immigrants from Peru in three days.

Comments Off on In Peru, Another Near Miss for Latin American Liberty

Dancing with the dead: Venezuelans turn to desperate measures to survive (Video) (2018)

Posted on March 31, 2021 by ifnm| Comments Off on Dancing with the dead: Venezuelans turn to desperate measures to survive (Video) (2018)

Venezuela is facing the worst economic crisis in its history. For those who live in the capital Caracas, daily life is about survival. Public services are barely able to function, the welfare state nothing but a distant memory. Violent crime is on the rise, while prisons are full. From the hospital to the morgue and the cemetery, FRANCE 24’s reporters show you the harsh reality of life in Caracas, where extreme poverty means people are turning to desperate measures to get by.

Comments Off on Dancing with the dead: Venezuelans turn to desperate measures to survive (Video) (2018)

Posted on March 15, 2021 by ifnm| Comments Off on Video: Inside Venezuelan Slum at Brazil Border (harsh conditions)

Comments Off on Video: Inside Venezuelan Slum at Brazil Border (harsh conditions)

Posted on December 28, 2020 by ifnm| Comments Off on China’s ‘dark’ fishing fleets are plundering the world’s oceans

The flotilla was plundering waters that are among the most biodiverse in the world: the Galapagos Marine Reserveis home to the greatest biomass of sharks on the planet.

When a vast Chinese armada appeared outside the Galapagos Marine Reserve in South America earlier this year, Ecuador’s Government sounded the alarm.

They called in the big guns, asking the United States Coast Guard to help keep an eye on the enormous number of fishing vessels.

The sheer size of the fleet fuelled Ecuador’s urgency: more than 350 Chinese fishing boats were detected, outnumbering its own navy and those of Peru and Chile combined.

Lieutenant-Commander Kristen Caldwell of the US Coast Guard, which sent a vessel down to the region to provide surveillance on the fleet, said the magnitude of fishing activity was unprecedented.

Posted on December 17, 2020 by ifnm| Comments Off on Venezuela wields a powerful “hate” law to silence Maduro’s remaining foes

Venezuela’s “law against hate” is suddenly a key tool for Nicolás Maduro to repress dissent, particularly online. A Reuters review of over 40 recent arrests found in each case that authorities used the law to detain critics of the president, his aides or allies.

Francisco Belisario, a Venezuelan mayor, retired general and member of the ruling Socialist party, had enough. His loudest local critic had accused him of bungling the response to the coronavirus outbreak and other big problems.

In August, he wrote a state prosecutor and requested an “exhaustive investigation” of his nemesis, Giovanni Urbaneja, a former lawmaker who had become a gadfly to the mayor and other Socialist officeholders. Urbaneja, Belisario wrote in a letter reviewed by Reuters, was conducting a “ferocious smear campaign” on Facebook and elsewhere.

Urbaneja not only defamed him and President Nicolás Maduro, the mayor wrote. He violated Venezuela’s Law Against Hate. The law, passed in 2017 but rarely used before this year, criminalizes actions that “incite hatred” against a person or group. Charge Urbaneja with hate crimes, the mayor implored the prosecutor.

Posted on December 28, 2019 by ifnm| Comments Off on Venezuela’s currency so worthless it’s mostly being used for making crafts

Data from the opposition-controlled National Assembly shows the inflation rate for October 2019 was 20.7 percent and the cumulative inflation for 2019 was 4,035 percent. The International Monetary Fund (IMF) estimates Venezuela’s inflation this year will reach 200,000 percent – and that the economy will contract by 35 percent, Al Jazeera reported.

Venezuela – once one of the more prosperous countries in Latin America – has been driven into such economic and political turmoil that its currency is no longer of any use.

However, that has not stopped Venezuelan bolivares from becoming a commodity elsewhere.

Across the border in Colombia, Hector Cordero uses the currency to make wallets and purses, which he sells to tourists in Colombia.

“These bolivares soberanos notes are worth nothing,” Cordero, who is from Caracas, told Al Jazeera. “These notes I use are not circulating any more since last year.”

Posted on February 20, 2018 by ifnm| Comments Off on Venezuelan refugee crisis could eclipse Syria’s, economist predicts

Around 4 million Venezuelans have fled their country, and the number will keep rising amid a severe shortage of food and cash, according to an economist. He said the outflow will eventually overtake Syria’s, which stands at 5.5 million.

Syria’s civil war has resulted in what’s been dubbed the world’s largest refugee crisis, but another humanitarian calamity may soon surpass it.

The millions of Venezuelans fleeing their turmoil-hit nation could eventually overshadow the number of Syrian refugees, according to an economist.

“The next refugee crisis is not being driven by a violent war but by a socioeconomic disaster of magnitudes hardly seen before,” Dany Bahar, a fellow at think tank the Brookings Institution, said in a Monday note, referring to the South American nation.

About 4 million Venezuelans — over 10 percent of the population — have left the country in search of better living conditions in the last two decades, Bahar said, citing others’ estimates.

In comparison, “the estimates of refugees who left Syria during the war account for about 5 million individuals,” he noted. The latest United Nations data indicates there are currently 5.5 million Syrian refugees.

Bahar said he expects Venzeula’s figure to increase “very rapidly” and eventually exceed that of the Middle Eastern state.

Posted on February 10, 2018 by ifnm| Comments Off on Mass exodus from ‘Mad Max violence’ in Venezuela: Thousands flee across bridge to Colombia amid desperate hunger and soaring crime following economic crisis

Thousands of desperate Venezuelans are trying to enter Colombia through the border crossing of Cucuta. They are fleeing hunger, inflation and the political crisis threatening to engulf the South American country. Colombia – along with neighbour Brazil – has sent extra soldiers to patrol their porous border with Venezuela. The crisis shows no sign of easing and Colombian lawmakers are beginning to tighten their border controls. Thousands of desperate Venezuelans are trying to enter Colombia in a bid to escape the hunger and soaring crime rate caused by the spiralling economic crisis.

Colombia – along with its neighbour Brazil – has sent extra soldiers to patrol their porous border with the country after officially taking in more than half a million migrants over the last six months of 2017.

The country is also tightening its border controls in a bid to stem the flow.

Comments Off on Mass exodus from ‘Mad Max violence’ in Venezuela: Thousands flee across bridge to Colombia amid desperate hunger and soaring crime following economic crisis

As Venezuela Collapses, Children are Dying of Hunger

Posted on December 17, 2017 by ifnm| Comments Off on As Venezuela Collapses, Children are Dying of Hunger 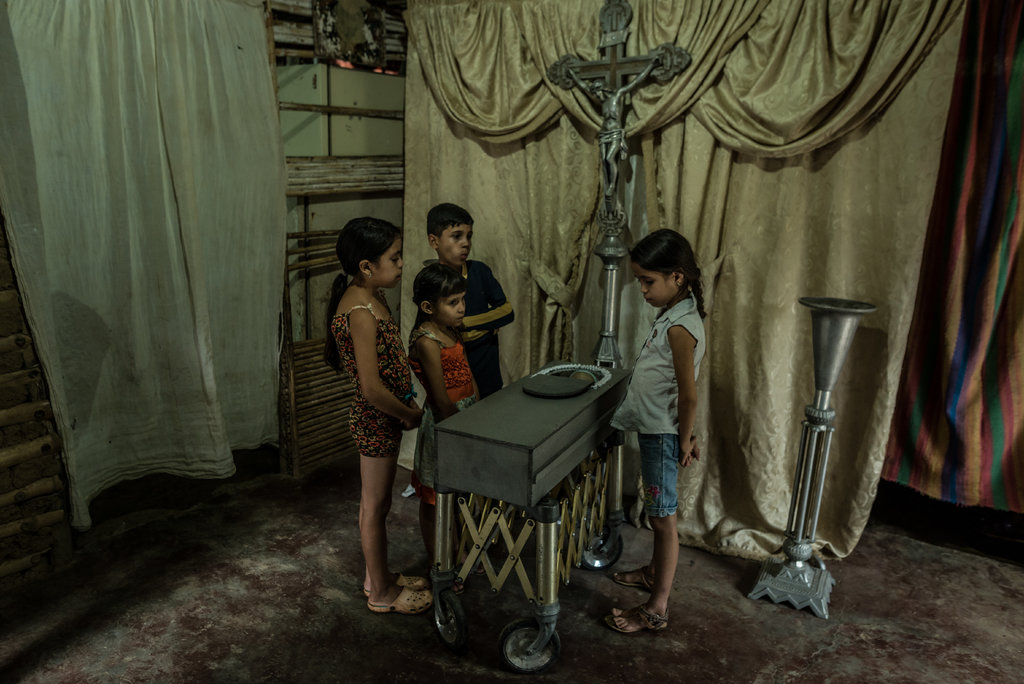 Kenyerber Aquino Merchán was 17 months old when he starved to death.

His father left before dawn to bring him home from the hospital morgue. He carried Kenyerber’s skeletal frame into the kitchen and handed it to a mortuary worker who makes house calls for Venezuelan families with no money for funerals.

Kenyerber’s spine and rib cage protruded as the embalming chemicals were injected. Aunts shooed away curious young cousins, mourners arrived with wildflowers from the hills, and relatives cut out a pair of cardboard wings from one of the empty white ration boxes that families increasingly depend on amid the food shortages and soaring food prices throttling the nation. They gently placed the tiny wings on top of Kenyerber’s coffin to help his soul reach heaven — a tradition when a baby dies in Venezuela.

When Kenyerber’s body was finally ready for viewing, his father, Carlos Aquino, a 37-year-old construction worker, began to weep uncontrollably. “How can this be?” he cried, hugging the coffin and speaking softly, as if to comfort his son in death. “Your papá will never see you again.”

Comments Off on As Venezuela Collapses, Children are Dying of Hunger