Posted on November 1, 2017 by ifnm| Comments Off on South Africans hold #BlackMonday protests over farm murders

The protest was organised to show outrage at the killings of farmers, especially after the death of a white farmer in Klapmuts near Stellenbosch. 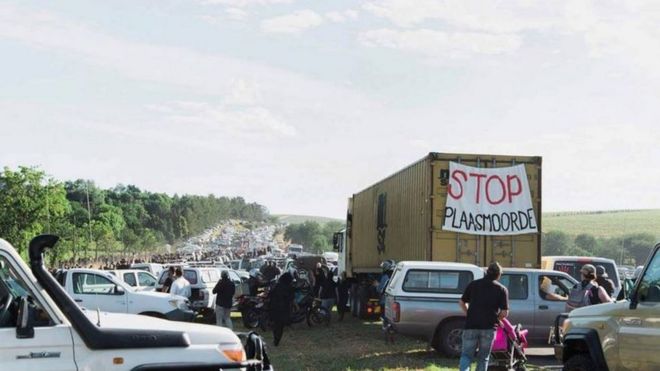 Demonstrators are blocking motorways in South African in protest at the murder of white farmers.

Klapmuts this morning <3 ?? . We managed, as a country, to peacefully stand together against violence and bring all the main roads to a halt for prayer. Together. United. . #southafrica #nomorevoilentcrimes #saveourfarmers #standtogethersouthafrica #genoegisgenoeg #blackmonday . . . #capetown #southafrica #supportourfarmers #unity #nikon #photographer #photooftheday

The BBC’s Pumza Fihlani in Johannesburg says the protests are already causing racial divisions after some demonstrators were seen carrying the flag from the apartheid era, when South Africa was governed by its white minority and black people were not allowed to vote.

This entry was posted in Africa, Ethnic Cleansing, Murder. Bookmark the permalink.