Early on Sunday before the world learned the identity and religion of the man who murdered up to 50 people in an Orlando, Florida, gay bar, a “law enforcement expert” for NBC went on the air on MSNBC and hinted that the shooter was probably a Christian and a member of a “white hate group.” 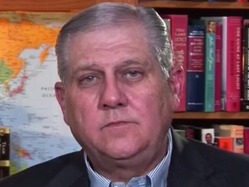 Just before 7AM as the details about the shooting were beginning to roll out, NBC analyst Jim Cavanaugh appeared to tell the MSNBC audience that the man who shot up the bar was likely a long-time patron of the club and may have been banned by management for some reason. Cavanaugh said the shooting could have been a revenge shooting.

But Cavanaugh indulged in other speculation, insisting that there are “a lot” of white, Christian, domestic terrorist types who would carry out an attack on a gay bar because “they hate diverse people.”

“Is it just because it’s a diverse club and he hates diverse people?” Cavanaugh added.

The “law enforcement expert” next ascribed the shooting to a “white hate group.”

“You know, there’s a lot of domestic terrorists we classify that do that, they are rooted in white hate movements. So it could be that,” Cavanaugh said.

Expanding on his theory that the shooter was someone who was a former patron who was kicked out of the club, Cavanaugh noted that not all mass shootings are terrorism.

This entry was posted in Islam, Murder, Radicals, Terrorism. Bookmark the permalink.