Posted on July 31, 2016 by ifnm| Comments Off on How DNC Wants Khizr Khan to Con America (Video)

Crooked sneaky Democrats! They get a Muslim to criticize Trump and use his son’s military service. Tough to talk about the military, right? Of the 683,000 Americans who have died for this country, how many were Muslims? While Khan was running from a Muslim 3rd-World armpit, where does he choose to come? AMERICA! He didn’t choose Iraq, Yemen, Egypt. He chose AMERICA! The fault Muslims run from their crapholes is BECAUSE OF LIBERALS! All taxpaying Americans serve. Trump more than most. How much does employing 22,500 employees contribute to America? What have crooked Hillary or useless Barack contributed? 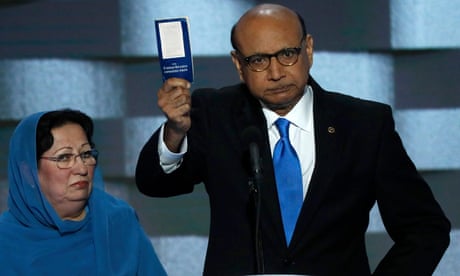 This entry was posted in Democrats/Progressives, Donald Trump, Islam, Radicals, The Clintons. Bookmark the permalink.