80% of all violent crime is gang related, with gangs playing a major role in the supply of trafficked victims. 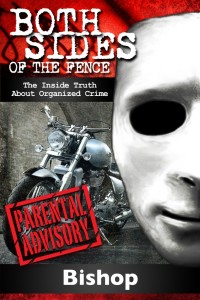 Both Sides of the Fence is the true story of a man known only as Bishop to protect his identity, who lived a double life as a deep undercover agent in an outlaw motorcycle gang. Rising to a chapter boss in less than a year, “Bishop” initially went undercover to ferret out bad cops. Instead, he discovered a highly structured criminal organization whose members engage in violent crime, weapons trafficking, international drug trafficking and widespread prostitution. This real-life Sons of Anarchy story will take you on the emotional roller-coaster ride of a family man and devoted husband who covertly worked to bring down some of his “brothers.”

“During the course of the case we experienced first-hand the connection that gangs and the cartels have with human trafficking,” says Bishop. “My wife and I know that we went through the storm because we have been called to expose this dirty secret in the United States.”

Refusing to enter a federal protection program, Bishop now spends his days risking his own life to help educate audiences and expose the connection between gangs and human trafficking in the United States. He lives anonymously, moves frequently, and wears a trademark custom white mask when telling his story to further conceal his identity – even to those that he works with.

Human trafficking has become an epidemic in the United States and traffickers are targeting our children and family members in our neighborhoods, schools, malls and public events. According to the gang threat assessment from the Department of Justice, there are over one million members in 20,000 gangs operating in the 50 United States. 80% of all violent crime is gang related, with gangs playing a major role in the supply of trafficked victims. The sale of a victim is more profitable then guns or drugs due to the fact that people can be sold over and over and drugs and guns are a one-time exchange. Less than one percent of victims are ever identified, and 83% of those are U.S. citizens.

This entry was posted in Drugs and Cartels, Human Trafficking, Immigration. Bookmark the permalink.