Posted on August 28, 2014 by ifnm| Comments Off on Tory MP Douglas Carswell defects to UKIP and forces by-election (Video)

Tory Douglas Carswell has defected to UKIP and quit as MP for Clacton, saying he will contest the subsequent by-election for Nigel Farage’s party. 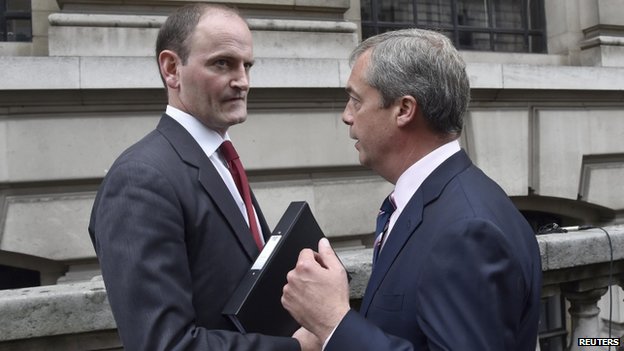 If he wins the support of voters he will be the first elected UK Independence Party MP in the Commons.

The maverick Eurosceptic backbencher said did not believe Prime Minister David Cameron was “serious about the change we need” in Europe.

The PM described his defection as “regrettable” and “counter-productive”.

Mr Carswell said the decision to jump ship from the Conservatives had given him “sleepless nights” but he wanted to see “fundamental change in British politics” and UKIP – a party he believed belonged to its members rather than a “little clique” of political insiders – could deliver it.

“This hasn’t been an easy decision. I have been a member of the Conservative Party all my adult life. It’s full of wonderful people who want the best for Britain.

The UKIP has grown not only due to frustration over illegal immigration and loss of sovereignty to the European Union, but anger over joblessness, decreasing standards of living and high taxes. 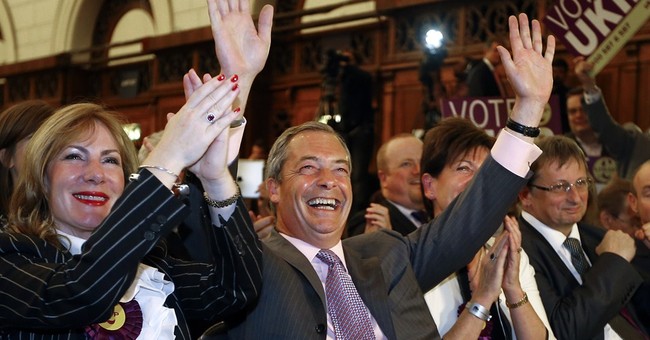 Something remarkable is taking place in our mother country. Late last month, a third party on the right overtook both major political parties in a national election, as significantly more people in England voted for the right over the left. The UK Independence Party (UKIP) is surging as a sort of British equivalent to the Tea Party, proposing a reduction in immigration and leaving the European Union.

The UKIP received the most votes in May’s European Parliament elections (electing delegates known as MEPs) with 27.49 percent, followed by Labour with 25.40 percent and the Conservatives (or Tories) with 23.93 percent. It was the first time in over 100 years that a party other than Labour or Conservatives have won the most votes in a nationwide election. Most of the remaining vote went to the Green and Liberal Democrat parties – but with over 50 percent going to UKIP or the Conservatives, it is clear the country is undergoing a conservative shift. The UK has been led since 2010 by Prime Minister David Cameron of the Conservatives.

Jeremy Zeid said he found the lack of white people in Ilford ‘worrying’.

A Ukip branch chairman has suggested that parts of London are being “ethnically cleansed” of white people.

Jeremy Zeid, the chairman of the Eurosceptic party’s branch in Harrow, suggested a Labour MP could be “complicit” in what he called “disappearing diversity” in Ilford, north-east London.

In a string of tweets, he wrote: “Having just been to Gerard Batten’s [Ukip MEP] office in Ilford, the almost [sic] absence of white faces in Ilford is worrying.

“Mike Gapes is so busy being ‘right on’ he is either blind to or deliberately complicit in the ethnic cleansing of Ilford which I’m sure will be called ‘racist’.

“A word so overused by the t***pot Left as to be completely devalued.”

Mr Zeid replied: “Are you not worried when diversity disappears?”

Farage: You Ain’t Seen Nothing Yet

Nigel Farage went on the offensive today as victory celebrations turned into a series of pledges to keep up the UKIP “momentum”. In a short speech in Westminster the UKIP leader told a packed room of journalists that his party had achieved something that “had not been achieved in a century, a party outside the main two, winning an election.”

Farage talked about his party being “a truly United Kingdom Independence Party” having made “breakthroughs” in Scotland, Wales and Northern Ireland. He admitted that UKIP were unlikely to win a European seat in Northern Ireland but described the election of David Coburn in Scotland as something that Scottish Nationalist First Minister Alex Salmond “will not enjoy”. But he went on to say that “the single most remarkable result was Wales” where the party had come “within a hairs breath of beating Labour”.

In order to keep up momentum Farage announced the creation of a ‘shadow cabinet’, as reported by Breitbart London and a strategy to target seats much like Paddy Ashdown had for the Liberal Democrats. Lord Ashdown pursued a strategy throughout the 1990’s of targeting almost all his national resources into the seats in which his party where strong on the local council.

This enabled the Liberal Democrats to ‘cheat’ the first past the post system and get a large number of MPs even though their vote share might have left them with almost none. In line with that strategy Farage announced that his focus would be on seats were UKIP gained at the local elections. These include the coastal towns of: Great Yarmouth, Boston, Plymouth, Portsmouth, Folkestone, and Grimsby. “We do like to be besides the seaside,” he quipped.

Nigel Farage has what is certain to be a strong position in Brussels, and now he is turning to Westminster. 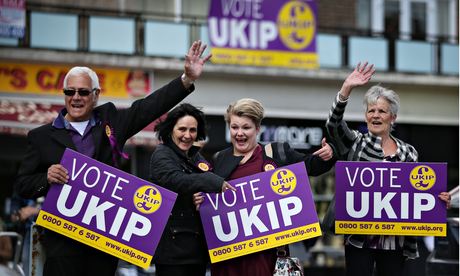 Ukip had landed and, as if reacting to an invasion by aliens, the native tribes – Labour, Tory and Lib Dem – simply did not know how to react.

Nigel Farage had been expected to grab between 75 and 100 extra councillors at best, but added nearly 130. Labour MPs and activists, who had tried largely to ignore Ukip’s impending arrival as the fourth party in British politics, veered between admitting that it had been hit and that Ed Miliband had to do better, and trying to dismiss Ukip as still so small as to be largely irrelevant.

Confusion reigned throughout Friday across the new political landscape. The Conservatives, themselves damaged by the loss of more than 230 seats and 11 councils, said it was Labour that should be most worried, while the Lib Dems, down by more than 300 seats and two councils, said little.

Excuses and attempts to minimise Ukip’s surge piled up from all three establishment parties. Ukip, it was pointed out, had seen its national vote share fall six points compared with last year. Farage’s party had not done well in London. It had enjoyed so much media exposure that it had could hardly have failed to do well. All fair enough as arguments, but collectively inadequate as a response.

The most memorable verdict came from an elated Farage on Friday morning: “The Ukip fox has entered the Westminster henhouse.”

Asked if she considered her remarks to be alarmist, she said: “People have come to me with tales of intimidation and I try to persuade them to go public but they feel they can’t. It worries me.”

A UKIP candidate standing in the European election has denied being alarmist after saying there were “no-go” areas in Kent because of the presence of gangs of Eastern European immigrants.

The claims have been denounced by the Liberal Democrats, who say they are inflammatory and could provoke vigilante attacks.

UKIP candidate Janice Atkinson made her comments following police raids across the county earlier this week in an operation targeting sexual exploitation gangs.

The raids in Margate, Folkestone, Dover and Gravesend led to a number of arrests. The 22 suspects were Roma immigrants originally from Slovakia and the Czech Republic.

In a press release responding to the operation, Janice Atkinson – who is one of UKIP’s top candidates in the south east region – said she feared reprisals and appealed for calm:

“Kent is on the frontline, both in border terms and where gangs are choosing to settle.