Steve Bannon is a media executive and political strategist. He served as executive chairman of Breitbart News, as an adviser to Donald Trump’s 2016 presidential campaign, and later as chief strategist in the Trump White House.

Steve Bannon is a media executive and political strategist. He served as executive chairman of Breitbart News, as an adviser to Donald Trump’s 2016 presidential campaign, and later as chief strategist in the Trump White House.

Steve Bannon is a media executive and political strategist. He served as executive chairman of Breitbart News, as an adviser to Donald Trump’s 2016 presidential campaign and later as chief strategist in the Trump White House. Bannon’s candid, full interview was conducted with FRONTLINE during the making of the October 2019 documentary “Zero Tolerance.”

Posted on October 15, 2019 by ifnm| Comments Off on Steve Bannon: CCP Will Collapse If US-China Economies Decouple – Zooming in (Video)

The world is watching as Hong Kong’s Carrie Lam invoked emergency law. Will this lead to a de-facto martial law? Will Hong Kong have another Tian An Men? Will the US Congress give the Hong Kong people what they need in their battle against the Chinese Communist Party? And will the US and China’s economies head to an inevitable decoupling? My interview with former White House Chief Strategist Steve Bannon at this critical moment for Hong Kong, China and the U.S.

Comments Off on Steve Bannon: CCP Will Collapse If US-China Economies Decouple – Zooming in (Video)

Steve Bannon Issues Statement: My Support Is ‘Unwavering’ for Trump and His Agenda

Posted on January 7, 2018 by ifnm| Comments Off on Steve Bannon Issues Statement: My Support Is ‘Unwavering’ for Trump and His Agenda

“Donald Trump, Jr. is both a patriot and a good man. He has been relentless in his advocacy for his father and the agenda that has helped turn our country around.

“My support is also unwavering for the president and his agenda — as I have shown daily in my national radio broadcasts, on the pages of Breitbart News and in speeches and appearances from Tokyo and Hong Kong to Arizona and Alabama. President Trump was the only candidate that could have taken on and defeated the Clinton apparatus. I am the only person to date to conduct a global effort to preach the message of Trump and Trumpism; and remain ready to stand in the breach for this president’s efforts to make America great again.

“My comments about the meeting with Russian nationals came from my life experiences as a Naval officer stationed aboard a destroyer whose main mission was to hunt Soviet submarines to my time at the Pentagon during the Reagan years when our focus was the defeat of ‘the evil empire’ and to making films about Reagan’s war against the Soviets and Hillary Clinton’s involvement in selling uranium to them.”

Comments Off on Steve Bannon Issues Statement: My Support Is ‘Unwavering’ for Trump and His Agenda

Posted on January 2, 2018 by ifnm| Comments Off on Anyone, Anytime, Anyplace: Media Discover Bannon’s Econ Nationalism Msg Resonates with Dems, People of Color

Former Fresno State football coach Pat Hill was known for his “anyone, anytime, anyplace” motto while he was building the school’s program last decade, and former White House Chief Strategist Steve K. Bannon seems to be using Hill’s playbook by taking the message of economic nationalism to all communities and people of all political persuasions and backgrounds. In recent weeks, legacy media reporters have been discovering that Bannon’s message is winning over Democrats and people of color who take the time to meet with Bannon instead of buying into false stereotypes about him.

Bannon is featured in Newsweek’s cover story this week (“Steve Bannon’s plan to Make America Great Again—With or Without Trump”), and Alexander Nazaryan reveals in the piece that even a “Democratic congressional staffer on Capitol Hill who was invited to the Breitbart Embassy because Bannon had learned of his work and was intrigued by the possibility of cooperation” was “shocked” by Bannon’s “interest level and respect” on a variety of issues that impact working-class Americans.

Bannon and the Democrat reportedly talked about populism and war, and the staffer reportedly said that Bannon’s “willingness to engage was striking. It was a surreal experience.”

“It’s obvious he could not last in the Trump administration, in part due to his opposition to wars of choice, hypermilitarism and endless U.S. occupations, and also some domestic policies where he sides more with liberal Democrats than with Republicans, including full employment, wage growth, fair trade, antitrust enforcement and serious spending on infrastructure,” said the Democrat, who reportedly fears being “crucified” if people found out that he met with Bannon at the Breitbart Embassy.

Posted on December 9, 2017 by ifnm| Comments Off on Steve Bannon Speaks At “Black Americans For A Better Future Summit” (Video)

Former White House Chief Strategist and Breitbart News Executive Chair Steve Bannon was a keynote speaker at a fundraiser for minority business development. He talked about the need for access to capital for minority entrepreneurs and eliminating unfair competition. He also discussed the goals of President Trump’s economic agenda including bringing manufacturing jobs back to the United States. The event was hosted by Black Americans for a Better Future. 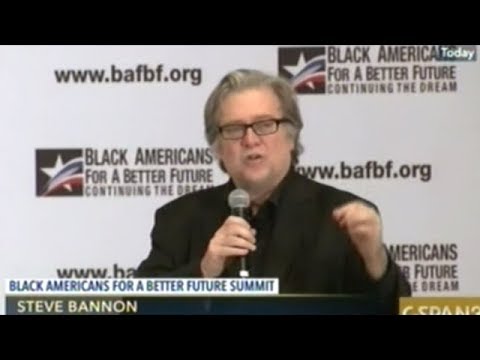 Steve Bannon: If America Doesn’t Thwart These Five Things, China Will Be a Hegemonic Power

Posted on November 20, 2017 by ifnm| Comments Off on Steve Bannon: If America Doesn’t Thwart These Five Things, China Will Be a Hegemonic Power

Breitbart News Executive Chairman and former White House Chief Strategist Steve Bannon warned Monday that America’s attention needs to be focused on China, or it will be left behind in the communist country’s wake. “Since the fall of the Berlin Wall, since our great victory over communist ideology…we’ve been on a strategic holiday, y’know ‘the end of history’ – we acted as if we are a hyperpower with nothing else to worry about,” Bannon told attendees at a Gatestone Institute event in New York City.

He pointed to recent developments in Beijing, specifically a recent three and a half hour speech by Chinese President Xi Jinping at the 19th Party Congress. He noted that, at the same time, a Brown University study found that since 2001 the cost of the global war on terror is $5.6 trillion.

“This is how you see great powers collapse,” he warned.

He explained how President Xi’s speech claimed victory for the Chinese way over that of Western liberal democracy, with Bannon describing Xi’s remarks as “chilling.”

“It said that the mercantilist, Confucianist, authoritative system of China is the victor over the Judeo-Christian, liberal democratic free-market West; that their system is better, and they go over how it is better and how they’ve beaten us,” he argued.

Comments Off on Steve Bannon: If America Doesn’t Thwart These Five Things, China Will Be a Hegemonic Power

Posted on November 15, 2017 by ifnm| Comments Off on Steve Bannon: Same Causes of Roman Empire’s Decline Can Be Seen in America Today

In a new biography by Keith Koffler, Breitbart News Executive Chairman Stephen K. Bannon shares his reminiscences about Edward Gibbon’s The History of the Decline and Fall of the Roman Empire, calling the tome one of his six most formative influences, and comparing America’s challenges to those to which our forebearers succumbed. “I’m not a multiculturalist,” Bannon relates in Bannon: Always the Rebel, explaining:

America has “an underlying culture, that has been passed down from Jerusalem, to Athens, to Rome, to London. It’s the belief in self-reliance, it’s the belief in the self-determination of the individual. It’s freedom to be the traditional family. The culture that is our way of life. I think it’s absolutely vital and important. And we have an obligation to those that came before us as much as we have an obligation to the people in the future to pass that down.”

The Romans, Bannon gleans from Gibbon, “[Are] the people most like us. … They built this great empire and how it all slipped away over time.”

First published in six volumes between 1776 and 1789, the Englishman Gibbon’s work is a landmark of historical scholarship, setting the pattern for modern history writing. The Roman Empire was the greatest power the Western world had ever known, and its long shadow still cast noticeably over Gibbon’s enlightenment Europe. His flowery narrative of three centuries of decadence and decline that followed the reign of Emperor Marcus Aurelius featured prominently in the schooling of ten generations of school children and university students across the English-speaking world. Like much of the classical Western Canon, it began to fall out of favor in the latter twentieth century.

Comments Off on Steve Bannon: Same Causes of Roman Empire’s Decline Can Be Seen in America Today

Posted on November 13, 2017 by ifnm| Comments Off on Pat Caddell: Global Elites Want to ‘Manage’ the Country’s Decline (Audio) “Our elites live in a world where everything is comfortable for them,” Caddell said. “I believe that behind the mindset … is a belief that the country is in decline and their job is to manage the decline.”

Caddell said the elites in the United States have bought into the idea that China is on the inevitable rise to global hegemony, replacing the U.S., and it is their job to manage that rise peacefully.

“This is the whole Thucydides Trap thing, ” Bannon said, referring to the idea that a declining superior power’s paranoia about a rising power will drive them to war.

Bannon said that, according to that belief, “How you avoid war is to manage the decline and make sure you’re the junior partner, but steering the bigger partner to peace and prosperity.”

“That’s exactly what the elites in this country are doing,” he said. “Your elites want to manage the decline because they got theirs. You’re not in the room, you’re not in the deal.”