Posted on April 5, 2016 by ifnm| Comments Off on Rapper calls for Palin gang-rape by ‘burliest’ black men

Singer wants Sarah ‘locked in a cupboard’ after sex crimes. A well-known rapper took to Twitter over the weekend to promote the gang-rape of former Alaska Gov. Sarah Palin.

Azealia Banks, whose 2014 album “Broke with Expensive Taste” reached the No. 3 position on Billboard’s Top R&B/Hip-Hop charts, unleashed a flurry of tweets attacking Palin on Sunday.

“[Palin] needs to have her hair shaved off to a buzz cut, get headf—-d by a big veiny, ashy, black d— then be locked in a cupboard,” Bank wrote, MRC reported Monday. “Let’s find the biggest burliest blackest negroes and let them run a train on her.” Palin: Romney is a ‘silly man’

“Don’t take the bait, Mr. Trump. It’s not about you. It’s about us. And we’ve got your back,” Palin finished.

Sarah Palin responded to Mitt Romney’s fiery attack on Donald Trump Thursday with two Facebook posts, in one telling the billionaire not to “take the bait” and in another, denouncing Romney as a “silly man” whose “holier-than-thou” broadsides against Trump will help her cause.

On Thursday Romney gave a speech urging voters to rally behind any of the other GOP candidates and ripping Trump of being a “phony” and a “fraud.”

In her first post, the former vice presidential candidate and Trump supporter argued that the Republicans who speak out against Trump are actually speaking out against Americans.

“The ‘machine’s’ deception and nonsensical attack on Trump isn’t really an attack on the candidate, it’s an attack on conscientious, hardworking, patriotic Americans who know we need a revolution to stop the complicit politicians who are fundamentally transforming America. We found the revolutionary,” she continued. “Donald Trump is the shock the Permanent Political Class needs to wake them up… to destroy their selfish cabal… to respect the will of the people… to make America safe and solvent… to make America great again.”

Comments Off on Palin: Romney is a ‘silly man’

Posted on February 2, 2016 by ifnm| Comments Off on Sarah Palin: ‘Wasn’t Hard’ To Choose Between Donald Trump And Ted Cruz (Video)

Former Alaska governor Sarah Palin joined the Today show to talk about her endorsement of Donald Trump as Iowans go to caucus tonight for the Republican presidential primary. “This was probably a tough call for you, between Sen. Ted Cruz and Donald Trump,” began Savannah Guthrie during the interview.

Palin explained that she was happy to endorse Ted Cruz in his Senate race, because he was a fighter for the American people but that she wanted him to stay in Washington D.C.

“I want to keep him in the Senate, and I want Donald Trump to be our president,” she said.

Guthrie asked Palin if Trump was necessarily “the godly candidate” for evangelical voters.

“I hope voters aren’t trying to find the most Christian-y godliest candidate out there because who are we to judge one another’s level of faith – our Christian quotient if you will,” she said.

Comments Off on Sarah Palin: ‘Wasn’t Hard’ To Choose Between Donald Trump And Ted Cruz (Video)

Posted on January 21, 2016 by ifnm| Comments Off on Pat Boone on Sarah Palin’s endorsement of Trump (Video)

Actor and musician Pat Boone on the 2016 GOP presidential candidates. 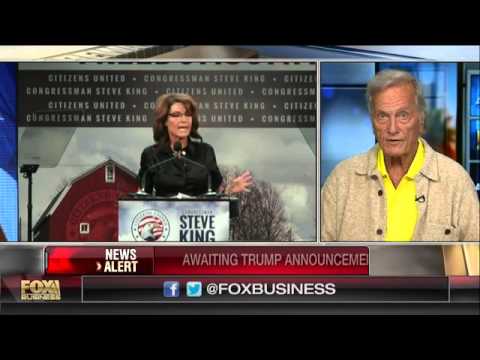 Posted on December 19, 2015 by ifnm| Comments Off on Sarah Palin: Congressional GOP Are Abusers And We’re Their Battered Wife

They did it again. But like a battered wife, we keep going back because every four years they bring us flowers, beg our forgiveness, and swear they’ll never hit us again. The GOP establishment in Congress is our abuser. We can’t hide the black eyes any more. The whole neighborhood knows. The Democrats are gloating. Obama thanked Rep. Paul Ryan effusively – and why shouldn’t he? Rep. Nancy Pelosi couldn’t have given him more.

And where was the famed House Freedom Caucus – those stalwart conservatives who spearheaded Boehner’s ouster? They were shrugging and handing us a bag of frozen peas to put on our black eye. If we’re lucky, maybe they’ll call 911 for us when the beating starts up again.

This is shameful, and it has to end. No mas!

For the last seven years, grassroots conservatives rallied to action under the belief that change starts at the ballot box. As I’ve said many times: there is nothing wrong with this country that a good old-fashioned election can’t fix.

People put their own lives on hold to send these Republicans to Congress to take back control of the House and Senate, to get a handle on our bankrupt federal government, and put America on the right track. I think of all the cross-country redeye flights I took away from my young son in order to campaign for Republican candidates, so full of promises, over the years. Others gave up a lot more than I did to elect a “conservative” majority.

Comments Off on Sarah Palin: Congressional GOP Are Abusers And We’re Their Battered Wife

Posted on December 15, 2015 by ifnm| Comments Off on Sarah Palin: Marion Maréchal-Le Pen and 16 Centuries of Christian France

I have a political crush, but one I couldn’t vote for today – because she ran for office in France. Marion Maréchal-Le Pen is the new deserved “It Girl” of French politics and a clear voice of courage and common sense in a country and continent in need of both.

In 2012, she earned the distinction of being France’s youngest elected Member of Parliament. Last week she handily won the first round of a race for the leadership of a large important region in southeastern France that’s home to the beautiful port city of Marseilles. Unfortunately, she lost the run-off election today because the two establishment Parties joined forces to defeat her.

But despite today’s tough losses, Marion and her aunt Marine Le Pen, the leader of the National Front (FN) Party, have established themselves and their supporters as a force to be reckoned with in France’s 2017 presidential race, in which Marine is sure to be a contender with her talented niece right behind her.

For some time now, I’ve admired the bold style of Marine Le Pen, who wrestled control of the leadership of her populist party in order to purge it of any trace of anti-Semitism, which it had unfortunately been tainted with in the past. But I’m especially impressed with the courage of her young niece who is a devout Catholic and unapologetically pro-life – not an easy thing for a politician to be in a country that’s aggressively secular.

Comments Off on Sarah Palin: Marion Maréchal-Le Pen and 16 Centuries of Christian France

“I said it back in 2009 and got beat up by the Left but understood by the common sense Right, and I’ll say it again: if it saves innocent lives, ‘profile away!'” she continued, arguing that Trump’s profile puts “the security of innocent Americans first.”

Former Alaska Gov. Sarah Palin has endorsed Donald Trump’s call for a ban on Muslims entering the U.S., claiming the Republican presidential front-runner is “committed to clobbering the bad guys, and putting the good guys first.”

“Trump’s temporary ban proposal is in the context of doing all we can to force the Feds to acknowledge their lack of strategy to deal with terrorism,” Palin, the 2008 GOP candidate for vice president, wrote in a long-winded post on Facebook Wednesday.

Unlike dozens of Republican leaders who have questioned the constitutionality of the proposal and accused Trump of being “bigoted,” Palin claims it’s a “commonsense” measure that further demonstrates the billionaire’s “courage.”

“A bold, non-politician candidate calls for a pause in this flawed bureaucratic program so it can be fixed, to make sure it doesn’t happen again. That’s common sense, which is why the media and spineless pundits attack it,” she wrote.

Palin: Obama Ought To Carry Big Stick Instead of Selfie Stick (Video)

Posted on September 10, 2015 by ifnm| Comments Off on Palin: Obama Ought To Carry Big Stick Instead of Selfie Stick (Video)

“America is sitting back.”

On Sunday’s State of the Union on CNN, ex-Alaska Governor Sarah Palin told Jake Tapper that it’s high time President Obama carried a big stick instead of a selfie stick, especially when it comes to foreign policy.

Her strong reaction was sparked after the President’s recent climate-change-propaganda trip to Palin’s home state, that included renaming Mt. McKinley to the Alaskan Native name Denali. Palin called this trip nothing more than “a tourism jaunt.”

“How about while he was up here, he, as a President, carried a big stick instead of a selfie stick,” Palin jabbed, harkening back to Teddy Roosevelt’s policy of speaking softly and carrying a big stick with foreign nations.

Comments Off on Palin: Obama Ought To Carry Big Stick Instead of Selfie Stick (Video)