The gang is charged under the Racketeering Influenced and Corrupt Organizations Act, or RICO, which allows prosecutors to charge individual members as part of a larger criminal organization. In recent years, the act has been used to prosecute human trafficking and gang cases, including charges in 2007 against 28 members of the Crips gang in Wichita — which was the first time RICO was used against gangs in Kansas. A federal grand jury indicted almost two dozen members of a Latino gang that victimized undocumented immigrants who do their business in cash and are reluctant to go to law enforcement because of their immigration status.

Federal officials have long been keeping an eye on the Dodge City area, which has become a hub for drug trafficking in the Midwest because of its remote location and easy access to places like Denver, Kansas City and Oklahoma City. They say gangs have thrived in the area because police lacked resources, including Spanish-speaking officers, and gang members are able to easily blend into the growing Hispanic population.

U.S. Attorney Barry Grissom said all but one of the 23 members of the Nortenos gang arrested are first- or second-generation U.S. citizens. He said they preyed on illegal immigrants who were vulnerable and unlikely to seek police protection, using violence and threats to create a climate of fear, defend the gang’s reputation and territory and promote its drug trafficking activities.

“The indictment alleges members of the Nortenos preyed on Guatemalan immigrants who work in the beef packing plants in Dodge City,” Grissom said. “It is well known among the Nortenos that many of the Guatemalan workers do not use banks and try to avoid contact with law enforcement officers. They are smaller in stature and they are unlikely to be armed.”

The report also notes a rise in Latin or Hispanic gangs. In the Fort Wayne Police Department’s annual report, the names of 25 gangs or cliques are listed as being active in the city. “We are seeing a rivalry for territory for the first time with an increase in Latin/Hispanic gangs,” the report said.

David Wilson Jr. drove a tan Nissan down Spatz Avenue one night this month, never expecting the sounds of gunfire that would soon erupt throughout the neighborhood.

Caught in the middle of what turned out to be a gunbattle – witnesses said more than 50 shots rang out that night – Wilson was hit at least once and died at the scene, becoming one of Allen County’s homicide victims.

Fort Wayne Police Chief Rusty York said this week that Wilson’s death was probably the result of gang violence, but unusual this time because the 50-year-old city man was not a part of any gang.

He wasn’t a target and neither was the 53-year-old man sitting in the passenger seat who escaped unscathed and the 30-year-old woman riding in the back seat who was also shot but survived.

They were innocent bystanders in the wrong place at the wrong time. “That’s what it seems right now,” York said.

There have been 14 homicides in Allen County this year compared to eight at this time a year ago, most of them shootings. York attributes many of the shootings to gang activity.

NY gets waiver from No Child Left Behind law

U.S. Education Secretary Arne Duncan said in a call with reporters Tuesday that New York was one of eight states whose waiver applications were approved. The federal government has granted New York’s request for a waiver from some requirements of the Bush-era No Child Left Behind Law.

Education Commissioner John King says in order to qualify for the waiver, the state had to adopt new college and career-readiness standards and a teacher evaluation system that relied in part on student improvement.

Patterico’s SWATer told 911 dispatchers that he (posing as the blogger) had shot his own wife, and police greeted him with drawn weapons, handcuffing him and waking his wife to frisk her as a police helicopter flew over their home.

Erik Erickson, editor-in-chief of RedState.com and a CNN political contributor, reports that he is the latest conservative to be “SWAT”ed.

Local police received a call from an individual claiming to be Erickson, stating that an accidental shooting had occurred at his home. Says Erickson, “Tonight, my family was sitting around the kitchen table eating dinner when sheriffs deputies pulled up in the driveway.”

In a statement to Breitbart News, Erickson further explained:

I can say that the Sheriff’s Deputy told me someone had called from my number, giving my home address, claiming an accidental shooting.

Whether or not they actually gave the number, I don’t know. My actual guess is that, given how we have our number set up, someone called 911 from a blocked number and gave our home address.

This tactic has previously been used on conservative blogger Patrick Frey aka Patterico, a California Deputy District Attorney, and Mike Stack, a New Jersey private citizen, both of whom were targeted by the left following the sex scandal which forced Anthony Weiner to resign from Congress.

Captain Jack Sparrow – What the Black Pearl really is, is freedom

To “have an opinion” on policy while simultaneously to “have no idea” about the facts the policy confronts appears to be the perfect summation of the kind of intellectual discourse that is considered appropriate in the 21st Century. The role model for contemporary thinkers is Sgt. Schultz from Hogan’s Heroes: “I know nuffink!”

Thilo Sarrazin, the former Social Democratic central banker with a doctorate in economics whose previous book on immigration policy has sold 1,100,000 copies in Germany, has a written a new book, Europe Doesn’t Need the Euro. In the Atlantic, Miss Heather Horn finds herself disturbed by Sarrazin’s sinister reasonableness:

The Controversial German Book Linking the Euro to Holocaust Guilt

It’s hard to think of a good American equivalent to Germany’s Thilo Sarrazin, the politician turned best-selling author. The closest one could be Pat Buchanan: in some circles, he and his writings are considered entirely legitimate. In others, they’re considered shocking and revolting to the point of scandal. …

Now, Sarrazin is addressing the euro crisis. Tuesday, his new book Europe Doesn’t Need the Euro, hit the shelves. If you’re just paging through idly, it doesn’t seem to be as provocative, and, on balance, it really isn’t: you’d expect as seasoned a provocateur as Sarrazin, especially with his leanings towards ideas of ethnic and educational superiority, at least to say some obnoxious and offensive things about Greek people or their ability with a balance sheet. He doesn’t do that. The book, nevertheless, has immediately drawn fire — and with good reason.

Mungo Jerry – In The Summertime

The Left has consistently used the good of expanded American tolerance to protect and promote the worst behaviors in those it sees as victims of prejudice. This suggests to me that the purpose of leftist tolerance is not tolerance at all. The Left’s purpose is rather to use our tolerance as an excuse to attack those institutions that have protected our liberties from their statist controls. Power is what they want — and “tolerance” is only the hammer they use to get it.

When homosexual bully Dan Savage unleashed a foul-mouthed tirade against the religious beliefs of a group of teenagers at the National High School Journalism Convention in Seattle last month, he exposed the lie behind the Left’s idea of tolerance. Savage used obscenities to describe passages in the Bible he disliked and displayed either ignorance or dishonesty in talking about the role of Christianity in advancing the cause of freedom. Then, with what would be creepy bad manners in any adult talking to young people, he called students “pansy-assed” for walking out on him. The so-called anti-bullying activist’s use of such sexually loaded language, and his frequent accusations that his opponents are secretly gay, bespeaks a deep level of self-hatred (why else would he think calling someone gay is an insult?); and the fact that he venomously attacks Christians and is never seen standing up in front of Muslims to curse out the Koran suggests that, like most bullies, he’s a coward as well.

And yet, as Ben Shapiro expertly illustrated at Breitbart.com, the Left’s mainstream media mouthpieces quickly went to work recasting Savage’s disgusting and childish performance as somehow justifiable while making those who protested against it seem thin-skinned.

Why? In what world — in what cause — is it even vaguely acceptable for a grown man to bully teenagers for their spiritual beliefs in that manner? We need only imagine Rush Limbaugh making his points in such terms and in such a place to know the reaction from the Left would have been much different.

I have had a dream … a dream where the Hunter Rogers of the nation will point their iPhones and Blackberries at their scary teachers en masse and with one voice yell to these anti-American propagandists the words of Dee Snyder of Twisted Sister—“We’re not gonna take it!” 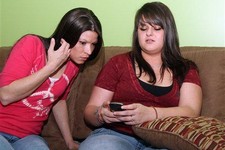 God bless cell phones. With them we can chat with our friends; we can watch the grossest zit since the dawn of time being popped via YouTube; and our kiddos can record their bat crap crazy teachers attempting to mitigate their First Amendment rights!

This week audio surfaced of a North Carolina teacher, Tanya Dixon-Neely (black), berating 13-year-old Hunter Rogers (honky) for criticizing president Obama (hate crime). Neely said Rogers could be arrested for slandering Obama. What a crock! Children cannot be arrested for criticizing Obama—at least not until his second term when we will truly see our First Amendment rights vanish like a pack of raw wieners at Rosie’s house.

Thankfully, Hunter hit the record button on his iPhone when this blathering big government gal started spewing lies to the kids—via North Carolinians’ tax dollar—exposing her incredible bias, and thereby getting her suspended. Hopefully she’ll get fired.

Parents in Hunter’s school district should demand she get canned. Why? Well, one reason is she doesn’t know what the hell she’s talking about and is teaching your children. Hello. What kind of Bozo screening process is in place that people like Tanya get the keys to your tadpole’s future? I wouldn’t let her sell fried chicken gizzards at a carnival much less school one of my offspring.

“For the first time in nine years, Americans are not fighting and dying in Iraq. We are winding down the war in Afghanistan and our troops will continue to come home. After a decade under the dark cloud of war, we can see the light of a new day on the horizon.”

Reuters: “As commander in chief, I can tell you that sending our troops into harm’s way is the most wrenching decision that I have to make,” Obama said shortly after laying a wreath at the Tomb of the Unknown Soldier.

“I can promise you I will never do so unless it is absolutely necessary and that when we do, we must give our troops a clear mission and the full support of a grateful nation.”